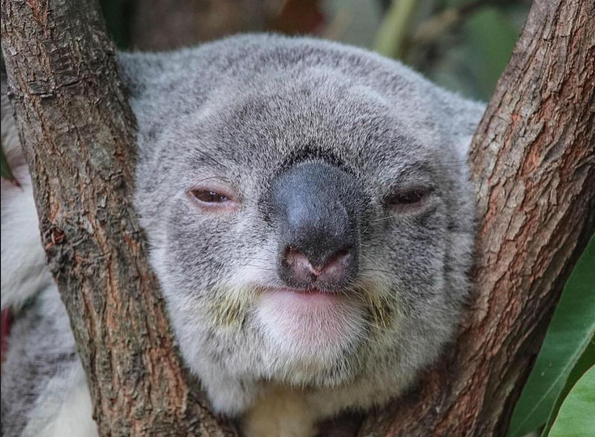 The alleged “last-known population of koalas on the NSW far south coast” is but a small part of what is a largely unknown national population within a continuous section of a range extending from the Hunter Valley north of Sydney and south to the Gippsland Lakes in Victoria. Irruptions — plagues of koalas — are known to be occurring near Bairnsdale, Buchan, Mallacoota, Bega–Bermagui, Numeralla, Southern Highlands, Campbelltown–Lucas Heights and the Blue Mountains’ Wollemi National Park. Virtually invisible, low-density sub-populations in all the forests linking these areas of known irruptions are breeding rapidly on all the soft and juicy new food resources generated by regrowth after our Black Summer megafires.

The ABC tells us

Black Summer led to the declaration of koalas as endangered across most of eastern Australia. But another legacy has been a surge in support for a different kind of fire.

They quote “cultural fire practitioner” Dan Morgan, who relates how, when the fires got to the top of Biamanga Mountain, “they trickled around here for more than a month like the old spirits of the land just sat that fire down and protected the koala habitat”.

The implication that ‘cultural burning’ protected koala habitat is incorrect. Firestorms driven by searing northwesterly winds didn’t reach the new koala park at Biamanga. Eden didn’t burn for the same reason. It grew dark here at 4pm on January 4. I patrolled my property for 12 hours while black leaves rained on me driven by a southerly wind. Had it been fireshowers of burning embers from the northwest I could not have survived.

Professor Helene Marsh, Chair of the Commonwealth Threatened Species Scientific Committee, will join the author and other panelists in examining if  koalas are endangered or not.

Sign up via this link
Koalas: How threatened? Threatened how?

There has been a surge in enthusiasm for Aboriginal burning. But traditional burning by experienced land managers of any colour is not allowed in New South Wales. Fairdinkum science shows that eucalypt forests need mild fires at intervals of three to six years to maintain their health, safety and biodiversity. Sixty years of empirical data from forest management confirm that firestorms and megafires will occur in bad seasons unless at least half the landscape is properly maintained. That’s a minimum of 10 per cent per annum, effective for up to 6 years.

NSW’s Black Summer Bushfire Inquiry was ‘informed’ by green academics whose consistently wrong advice, based on hypothesis and modelling rather than experience and empirical data, has delivered death and destruction. We have emergency response and evacuation policies instead of sustainable fire management. Prescribed burning is applied in narrow zones around suburbia, covering less than 2 per cent of the forest. These firebreaks can’t possibly work against high intensity fires exploding in the wilderness, as demonstrated by the world record Gospers Mountain Fire burning half a million hectares from a single ignition by lightning.

The fire management plan for the new koala park near Bega excludes burning from the areas densely populated by koalas and relies on a ‘ring of confidence’ to the northwest. It’s a recipe for disaster, but ironically not a problem for koala conservation. Explosive fuels, koala plagues and megafires go together. The original irruption of koalas near Sydney, back in the 1830s, occurred in the foothills on both sides of the Blue Mountains after Aboriginal burning was disrupted and dense, young stringybark forests grew up. Dense forests, megafires and koala plagues are consequences of the absence of traditional fire management.

NSW’s Koala Inquiry sat during Black Summer. Before I gave evidence, the director of science for wildlife explained that koalas started ‘popping up’ in the Blue Mountains during the State Mine fire of 2013. Since then, they have found koalas everywhere – a young, growing population.

I showed the inquiry photos of a young male koala south of Eden, where the National Parks and Wildlife Service claims they are extinct. I tried to explain that Aboriginal burning maintained healthy and safe forests with very low densities of koalas living unseen in home ranges of ~100 hectares and containing thousands of trees. They have big noses to sniff out the soft young shoots that are rare in healthy mature forests. Strong limbs carry them on their nightly quest for fresh browse.

Frequent mild burning recycles nutrients from litter and cured grasses, maintaining healthy soils and roots and trees as well as delicate and diverse groundlayers supporting a variety of small animals. My photos showed the koala barely visible above a dense explosive scrub layer in the canopy of a small, sick tree. I saw him as he crossed the highway and disappeared. I stopped, heard him crashing through the scrub and litter and grunted at him. He shinnied up the tree to check me out from above.

THE FACT of the mater is that there are many more koalas over a much wider area than when Europeans arrived. They are an irruptive forest species which outstrips its resources and invades woodland areas where it didn’t live naturally. This is clearly evident in the history of the subpopulation near Bega.

Europeans occupied the Bega Valley from 1830 and didn’t see any koalas. Aboriginal burning was disrupted and dense young forests sprang up in the foothills. Koalas bred up on the abundance of soft young shoots. Europeans established pastures which changed soils and affected the roots of paddock trees. As the trees gradually declined, they constantly resprouted soft young shoots. Koalas from the foothills invaded the valleys by the 1860s, increased to plague proportions by 1880 and, as a consequence, suffered malnutrition and disease.

Europeans shot them and sold their furs. Dingoes increased markedly between 1880 and 1890 with the benefit of such easy prey. Numbers of koalas plummeted when leaves frizzled during the Federation Drought, and they suffered epidemic disease from 1905 until they disappeared in 1909. Dingoes declined again as koala numbers crashed. Koalas persisted at natural very low densities in the surrounding forests. Similar processes occurred throughout the koala’s range.

By 1934, as per the mep reproduced below, koalas were supposedly extinct in South Australia, mainland Victoria and New South Wales. 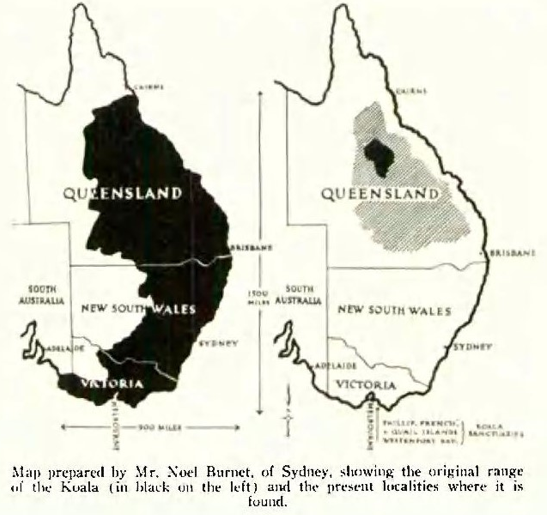 However, a 1949 mail-out survey turned up 109 koala sightings across NSW. In 1966, Professor A.J. Marshall, from Monash University, wrote that “few Australians have ever seen a wild koala”. Ten years later, “the most significant outcome” from a symposium at Taronga Zoo was “unanimous agreement [of 43 experts] that the koala is no longer an endangered species” and featured “large, growing populations”. By 1992, the NSW government was again listing the koala as a vulnerable species when the population was actually irrupting through most of its range.

The supposedly “last-known koalas on NSW far south coast”, as the ABC would have it, were virtually invisible in 1980. There are only four records of koalas in the Biamanga-Murrah area between 1920 and 1987. No koalas were found that same year during complete searches of 36 high-intensity timber-harvesting coupes amounting to 400 hectares. Much of what is now the new koala park was also burnt by high intensity wildfire in 1980. No koalas were found by National Parks and Wildlife Service (NPWS) surveys in the area between 1979 and 1984.

By 1997, koalas were irrupting in the dense young regrowth forest. A regional playback survey led by Forestry Commission and timber workers achieved ten times the rate of detections at Biamanga-Murrah compared to the rest of the region. Forestry conducted pre-logging and post-logging surveys showing that koalas continued to use logged coupes. The recent ABC story quoted former NPWS Threatened Species Officer Chris Allen, an anti-logging activist with Tantawangalo Catchment Protection Association before joining NPWS, as saying

In 1998, the NSW and Commonwealth governments committed millions of tons from these forests to the woodchipper and sawmill, without knowing about the koalas here.

The fact is that NPWS chose to ‘protect’ other areas at Tantawangalo and Bermagui-Murrah for koalas under the Regional Forest Agreement. What is the new koala park was to remain available to supply sustainable timber resources. But in 2014, NPWS/Office of Environment and Heritage didn’t consider at least 40 records of koalas in the south and west of the region. They incorrectly announced that koalas had disappeared by 1996, except at Biamanga-Murrah. They further stated that the transfer of state forest at Tantawangalo to national park came “too late for conserving the koala population”.

NPWS published a model supposedly showing the regional koala population to be extinct. Although Mr. Allen and OEH had reported finding koala faecal pellets at Tantawangalo in 2010, they reported years later that none had been found. They cited an unpublished, undated internal report to explain two different versions of results from the same faecal pellet surveys in 2010. They argued in a scientific paper, published by Wildlife Research, that a sighting of a koala in 2013 at Tantawangalo didn’t prove that koalas were still there!

The new Biamanga-Murrah koala park was established by NSW in apparent contravention of the Regional Forest Agreement with the Commonwealth. The park was designated as a flora reserve under the Forestry Act but placed under control of NPWS. Sustainable, renewable timber resources were locked up, ready to burn the next time the extreme northwesterly weather reaches the coast in a severe fire season.

By 2017, research using effective survey technology had established that koalas on the north coast were five time more abundant than previously reported and no longer associated with young forests. The same technology showed that koalas at Biamanga-Murrah are equally abundant and obviously increasing.

Koalas are not a vulnerable or endangered species, but there is multi-million dollar multinational industry exploiting their cute and cuddly appearance whilst peddling propaganda about their imminent extinction to raise funds, supposedly for wildlife conservation. 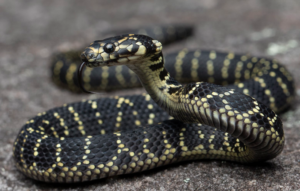 They say that koalas are a flagship species which can help to conserve others not so cute, such as the truly endangered broad-headed snake. Fact is, where koalas are irrupting, the truly endangered species are declining. The snake is extinct in national parks around Sydney and declining in Morton National Park further south, because scrub growth without mild fire shades out its basking habitat of bare rock, and high intensity fires burn down its cooling habitat of hollow trees.

Koalas are suffering disease, dog attacks and vehicle collisions because they are in plagues and re-invading territory that is not natural habitat. Reported catastrophic declines at Pilliga-Liverpool Plains and the Koala Coast were crashes of unsustainably dense sub-populations during the Millennium Drought.

The evidence is there, the conclusions inescapable. Yet, somehow, it makes no difference.