Getting the Vapours Over ‘Green’ Hydrogen 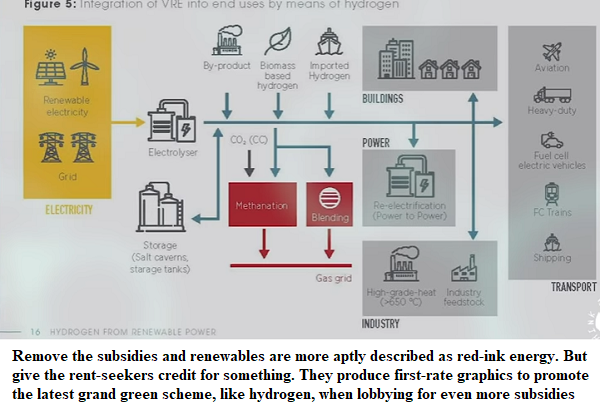 Hydrogen power is now all the rage it seems.  And with Andrew Forrest pushing it, it may eventually find a place among all the other peripheral energy sources with which we’re currently encumbering ourselves.   I have not yet had a chance to delve into the pros and cons of hydrogen as a source of mains power, but I understand that its extraction is not without its problems.  There are two sources, green and blue.  From the website of Petrofac, which describes itself as ‘a leading energy services company that helps our clients meet the world’s evolving energy needs’:

Blue hydrogen is when natural gas is split into hydrogen and CO2 either by Steam Methane Reforming (SMR) or Auto Thermal Reforming (ATR), but the CO2 is captured and then stored. As the greenhouse gasses are captured, this mitigates the environmental impacts on the planet.

…Green hydrogen is hydrogen produced by splitting water by electrolysis. This produces only hydrogen and oxygen. We can use the hydrogen and vent the oxygen to the atmosphere with no negative impact.

But if we look at extracting hydrogen from water there is a paradox.   To get hydrogen from water we separate it into its two fundamental components: two atoms of hydrogen and one atom of oxygen.  That takes a certain amount of energy.  When we burn hydrogen to obtain energy, we get water as a by-product – two atoms of hydrogen combined with one of oxygen.  Does the amount of energy generated by the burning of hydrogen exceed the amount used to produce the hydrogen?  The law of conservation of energy would suggest not.

This sounds to me rather like Snowy Hydro II, in which the system itself uses more energy than it produces and the only way it pays is that the input side of the equation is subsidised by purportedly cheap renewables.  The theory being that we make the hydrogen when the sun is shining and the wind is blowing and store it to provide baseload power. I’m sure Alan Moran can address the technical and economic issues of this proposal better than I. But we won’t be storing all the hydrogen to generate electricity. A large proportion of it will be consumed all day, every day in propelling the electric vehicles so beloved of Bill Shorten.

I recently heard a story on Their ABC extolling hydrogen power EVs.  Apparently, one set a new world record of some 1300 kilometres on a single tank.  Pretty impressive.  Part of the performance is due to the fact that the hydrogen tank and its contents is much lighter than the conventional batteries currently being used in electric vehicles.  The hydrogen in the ABC’s cited example is burnt to charge a single battery.  And, of course, the longer you drive the lighter you become.  Sounds pretty good.  But there is one glitch that occurs to me.  What about the exhaust?  According to Cars Guide:

Hydrogen stored in the hydrogen fuel tank reacts with oxygen in the fuel-cell stack and produces electrical energy, heat and water. The heat and water goes out the exhaust pipe as water vapour – completely harmless, as opposed to the carbon dioxide that’s released by cars with internal-combustion engines – and the electricity either goes straight to the electric-hydrogen motor or to a battery that stores the electricity for when the vehicle requires it.

Water vapor is known to be Earth’s most abundant greenhouse gas, but the extent of its contribution to global warming has been debated. Using recent NASA satellite data, researchers have estimated more precisely than ever the heat-trapping effect of water in the air, validating the role of the gas as a critical component of climate change.

Andrew Dessler and colleagues from Texas A&M University in College Station confirmed that the heat-amplifying effect of water vapor is potent enough to double the climate warming caused by increased levels of carbon dioxide in the atmosphere.

Do we know how much water vapour will be released into the atmosphere as a result of millions of hydrogen powered EVs going on 1300km trips? And how much of that solar and wind power, which would otherwise be  producing electricity just to keep our lights on, will be diverted to making hydrogen? Just asking.

20 thoughts on “Getting the Vapours Over ‘Green’ Hydrogen”

The Taking of Ayers Rock

I’m Dreaming of a Green Christmas