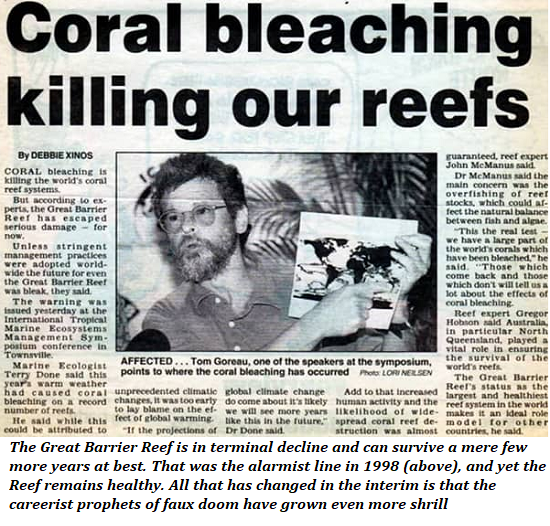 Every year for well over half a century “experts” have declared the Great Barrier Reef is facing dire threats and even immanent destruction.  Despite several million visitors to the Reef being enchanted by its beauty and wonder they have seen and a 100 per cent track record of failed prophesies by Reef alarmists, the mainstream news media continue to report every latest “threat” with unquestioning credulity.  This dire publicity has sustained a local industry generating a flow of well over $100 million of taxpayer money each year devoted to finding, promoting, and researching those purported threats while the recipients of that taxpayer largesse pretend to “manage” the 350,000 square kilometres of virtually pristine, unpolluted, and unexploited ocean that comprises the GBR.

However, the global virus epidemic has almost totally usurped the attention of the news media and cut off the flow of public attention and concern vital to the ongoing government funding on which the reef salvation industry depends.  A similar, though somewhat more modest, impact has also affected the climate change movement. The response in both camps has been to ratchet up the alarm from a generalised “existential threat” to an imminent “emergency”. Still, to the extent that the media has focused a bit of attention on things other than the pandemic, the hyped threats regarding the GBR and climate change have predictably continued to be accorded the usual unquestioning credibility of authority with no sound evidence ever being presented.

The uncomfortable, irrefutable truth is that the threats to the GBR are all entirely hypothetical.  Dressed up with estimates and assumptions garnished with impressive looking graphs, tables, and formulas plus claims about outputs from “cutting edge” computer modelling, it is all pretty impressive. The lack of actual empirical evidence of the threats and the unverified, unvalidated, and inaccessible nature of the modelling never seems to be questioned.

The current “dire threats” to the Reef involve coral bleaching, attributed to climate change and declining water quality said to be a consequence of farming and grazing. The real-world evidence presents a quite different picture.

Ongoing research elsewhere is finding that evidence of bleaching events is common in coral skeletons going back hundreds of years and rapid recovery is also the normal outcome.  The frequency and severity of such events varies in different localities with no statistically significant trend of increase or decrease over time.

Although inshore water quality is claimed to be declining on the GBR no evidence of increasing turbidity, nutrients or pesticides has been demonstrated and the levels which have been reported are well within natural limits for turbidity and nutrients and far below any toxic levels for the minute traces of pesticides detected near river mouths where, in reality, the fresh water naturally discharged in rainy weather can occasionally be genuinely lethal to nearby reefs.

By definition, a barrier reef is situated well offshore of a coast and a reef immediately off the shore is a fringing reef. However, the Great Barrier Reef National Park extends from the shore to 5 or 10 miles beyond the outermost reefs into the open ocean and even past the outer edge of the continental shelf. The nearshore patches of coral and fringing reefs along the coast are small and scattered.  This is a fringe environment for corals, with large stretches of the coastal sea floor covered in sand, mud, or seagrass and is unsuitable for corals.  These inshore reefs make up only about 1 per cent of the reefs in the GBR park.  Where corals can grow inshore they are subject to frequent devastation by natural extremes of temperature, floods and storms. This is not the Great Barrier Reef.

In recent years the attention of the Reef alarmists has been drawn to the frequent devastation occurring on these nearshore reefs and it has been attributed to declining water quality which they blame on farming and grazing activity.  These are now being heavily subjected to new restrictions and demands claimed to be necessary to “save the Barrier Reef”.  That no actual evidence of any decline in water quality or of any harmful level of nutrients, agrichemicals, or siltation attributable to farming and grazing has been demonstrated is not even considered.

One could go on for another half-century continuing to debate the myriad details of all this; but a much easier and more conclusive approach might be to just have a look at the actual condition of some prime inner reefs.

Between the towns of Cairns and Innisfail, near the middle of the GBR, there is a stretch of coast about 50km in length and drained by two rivers, the Russell and the Mulgrave, which join just before entering the sea. This catchment area is extensively farmed.  Directly offshore, about 10km out from the river mouth, is a group of small rocky islets known as the Frankland Islands which are surrounded by extensive fringing reefs.  Normally they are far enough out to be surrounded by moderately clear inshore waters of the GBR lagoon, although wet season floods occasionally do push river discharges out to these reefs.

However, it should also be noted that such flood plumes, though extensive, only last a few days at most and are in fact just on the top metre or less at the ocean surface with normal lagoon water beneath. It is only near river mouths that the fresh water, which is lethal to most marine life, extends deeper before being pushed to the surface by the denser sea water. Overall, the condition of these reefs should be indicative of the general condition of inshore water quality adjacent to the economically developed areas of the GBR.

So, what do we find here?

It happens that I have a friend, a retired surgeon from Cairns who is one of the few full-time residents in the tiny settlement of Russell Heads, accessible only by boat at the mouth of the river. Dr. Mike Mansfield grew up in the area and is an enthusiastic recreational fisherman.  He is also a long-time conservationist, going back to the era when it was driven by a concern for the natural world and before it was subsumed by environmentalism into a platform for virtue signalling by urbanites who prefer to live where nature has been annihilated. Mike suggested I should have a look at the corals around the Franklin Islands, recently taking me out to see for myself. 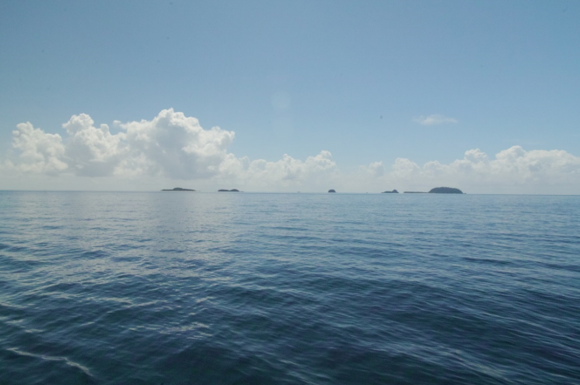 Above are the Frankland Islands rising over the horizon, and up close (below) the largest of them. 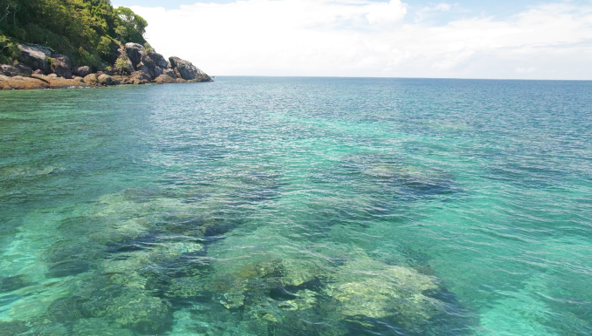 Numerous large old heads of massive Porites corals are conspicuous. The bald tops of the large heads in shallower water have been repopulated by a variety of younger corals (below). 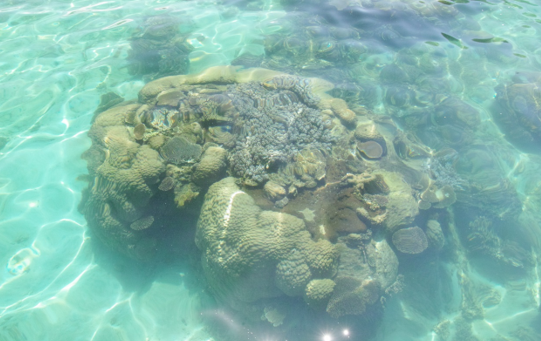 An underwater view makes clear the two-metre height of some of these massive coral colonies (below). 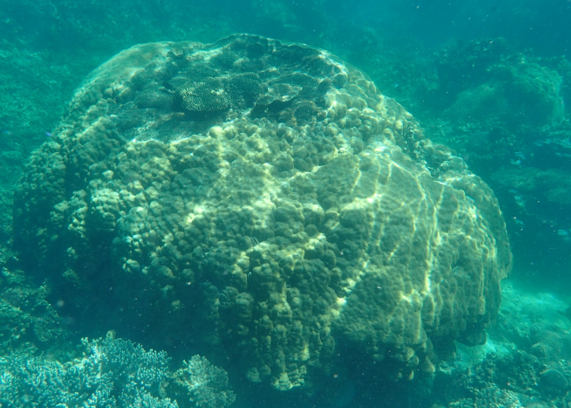 Between the large coral heads are extensive areas densely covered in small, faster growing and more fragile species which are subject to occasional devastation from storms. That many of these fragments continue to live and to grow (below), creating dense beds as seen here attests to a very healthy water quality. 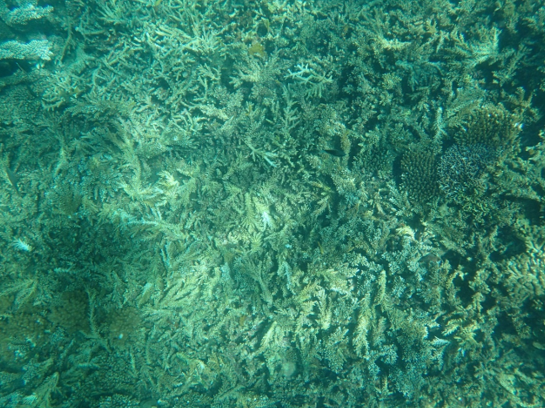 The oldest and largest corals are a living logbook. As much as five metres across, they grow at a rate of about 1cm per year on all sides, meaning they are between 120 and 150 years old.  The larger ones in shallower water have reached a height where their tops are exposed at the lowest low tides; and, if it rains when they are exposed, the polyps die, leaving them bald on top. Small colonies of various other corals have grown in these bald patches, but their time is limited to a few years before rain on an extreme low tide occurs again. In slightly deeper water the large coral heads are healthy on top.

So, what does it mean to find a vibrantly healthy reef area not far offshore of where a major river catchment empties into the GBR lagoon? For a start, it is important to understand that all of the rivers along the GBR coast are highly seasonal, with little or no flow into the lagoon except for occasional brief episodes of flooding which persist only a few days at a time.  Even then, this is highly erratic  — several such events in some years and only one or none in others.  Major floods severe enough to kill corals on reefs within a kilometre or two of a river mouth are uncommon and normally occur only on a decadal to multidecadal frequency.

The numerous large old coral heads around the Frankland Islands are testimony to the ongoing health of these reefs for at least the past century, and the abundance of small young colonies of more fragile species attests to the healthy condition of current day water quality.

That this is not some inexplicable exception surrounded by widespread devastation; but, is in fact the general condition of the GBR as a whole can also be confirmed. Prior to the virus pandemic a rising tide of doom-crying eco-catastrophism news about the GBR had begun to have a noticeable effect in declining tourism.

Unlike the academic “reef experts” (who may spend a couple of weeks on the reef, and usually in a different place, each year) the reef tourism operators go the same places almost every day and are acutely aware of the ongoing healthy condition of their locations.   To counter the fake news damaging their business they have created a website featuring a spectrum of reports, images and videos showing the luxuriant condition of the reefs visitors can expect to see wherever they might go on the GBR.  More pictoral refutations of alarmism can be found here at Great Barrier Reef Today

As to the rivers and the farming, defamed as a threat to the Reef, no actual evidence of such pollution is ever presented. It is all based on hypothetical assumption and unverified, unvalidated computer modelling. The best summary of actual evidence for river water quality in the region published in a peer reviewed scientific journal is Robert M. Carter’s paper,  Great News For The Great Barrier Reef: Tully River Water Quality

This paper reviews the available data regarding nutrient contents in the Tully River, north Queensland, which is cited as the best (available) evidence for human-related changes in nutrient export from (GBR) catchments [1]. It is shown that the claim of human-related nutrient enrichment in the Tully River, and regionally, is without substance. No detectable trends in GBR water quality have occurred since systematic measurements were first started in the 1980s – Carter (2006).

This remains true today and the use of farm chemicals in the region has in fact declined.

In regard to the water quality of the Russell and Mulgrave Rivers, perhaps the best indication may be the inhabitants who actually live in it and get their food directly from its water by filtering it.  These are the oysters, and they are abundant and healthy.

So, where does all this leave us?

By far, the greatest threat to the wonderful prosperity of Australia is not climate change, terrorism, COVID or any of the other fears stoked by careerists and an unquestioning media.  It is simply the ongoing cumulative effect of an ever-increasing bureaucratic morass of restraints and demands confronting every productive activity and personal freedom itself.

Money is best understood as a call on resources, and misdirecting some hundred million dollars of national resources into pretending to “manage” the GBR and “save” it from an endless litany of dubious  “threats” is but one relatively modest example. If we cannot soon recognise and effectively address this malignant proliferation of hypothetical solutions to imaginary problems the prosperity we have come to accept as normal may prove to be as distressingly short-lived.

A marine biologist, Walter Starck is a frequent contributor

Can we really take the ocean’s temperature?