Absurdity Puts Its Skates On 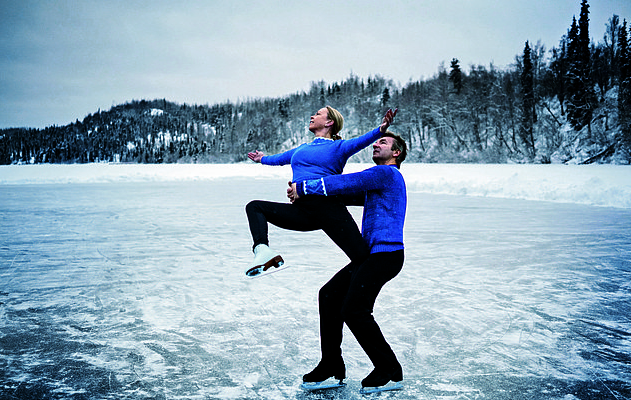 Have you seen Torvill and Dean – Skating on Thin Ice?  I had the dubious pleasure of watching it the other night and seeing two highly talented celebrities lend their skills to the global warming/climate change/climate crisis bandwagon in a travel extravaganza, narrated by Stephen Fry, showcasing Alaska and highlighting its purportedly doubtful future as a land of unmelted ice and snow.

The scenery is magnificent but the plot line is particularly clunky.  It goes like this:  two former world and Olympic champion ice dancers, in the twilight of their career, decide, after having been confined to indoor ice rinks for 45 years, they would love to dance their iconic Bolero routine in a state of nature.  No, not that sort of ‘state of nature’, although Jayne Torvill, at 63, is in remarkably good shape and could probably pull it off, and Christopher Dean looks pretty trim too. The duo’s quest was to dance on an ice lake in Alaska before the climate cataclysm melts them all.  That would hardly seem such a difficult project that it would require an hour of television to preface a three-minute performance.  After all, Alaska is one of the coldest places on earth and dotted with frozen lakes in winter.

But not so.  It seems the search for suitable ice took them across the length and breadth of Alaska.  Early in the journey they are shown skating effortlessly across the very large Lake Bonnie, but it seems the ice was not quite suitable for the purpose of dancing as it had a certain unwanted ‘texture’.  Their guide, Brad, told them that this lake interconnected with others to form a network that allowed him to skate for miles but that, unfortunately due to climate change (of course), some of the lakes weren’t freezing over as they should.  So, it was off on the hunt for an ice rink-size piece of lake with a suitable surface.  It turns out this was a daunting undertaking.  At times I almost despaired of then succeeding.  The easy option of Anchorage failed to offer a suitable venue because of unusually warm weather.   Jayne remarked that it was almost like parts of England.  Steven Fry, invoking images of pale-skinned Alaskans sporting themselves in summer attire and a moose taking refuge under a lawn sprinkler, solemnly intoned that ‘this long-term trend of rising temperatures suggests, not just exceptional weather, but … climate change’. This was in November 2020, which most readers will be aware was a particularly severe winter in the Northern Hemisphere.  That intrigued me so I checked the statistics.

The average high and low temperatures in Anchorage in November are -2C to -8C.  The Accuweather site tells us that in November last year, the average high was -3C and the average low was -10.5C.  There was a bit of variation but, overall, it was not an unusually warm November.  But that is not the real reason they could not find anywhere close to Anchorage to skate.  It seems, in order for lake ice to be safely skated, it must be subjected to temperatures well below 0C for a period which could extend into a couple of weeks.  I suspect that sites close to Anchorage, and there are some, would not normally be skateable in November.

To fill in time while their scout, Brad, searched for suitable ice, they tried their hand at ice hockey, which was followed by an interview with twenty-year weather presenter Tracy, who told them to find suitable ice they would have to go north to Fairbanks.  So, they embarked on the train under the friendly guidance of conductor George who obligingly stopped the train at three separate locations he thought might provide suitable ice but two of them actually turned out to be flowing streams and the third, a lake covered with snow, a patch of which was quickly cleared with a shovel, upon which Chris did a few turns for the edification of the other passengers who patiently waited while this charade was acted out. Chris politely explained that this wasn’t quite what they were after and wondered if George had actually seen ice skating.  A good chuckle was had by all at this amusing cameo.

Finally, they arrived at Fairbanks and narrator Stephen Fry obligingly informed us that if Anchorage was short of ice, the problem here was that there was plenty of ice but it was covered in snow. So now it was off to a dog mushing adventure in which they enjoyed a ride in a sled.  Of course, one of the local maidens, a professional musher, gave the obligatory climate change narrative, pointing out that due to climate change some rivers were not freezing over and they have had to change their racing routes.

Next a trip to Goldstream Lake, where ‘trapped in the frozen ice’, Fry tells us, ‘is a clue to all our futures’.  That sounds portentous, I thought.  He goes on to say that the lake was ‘for thousands of years, permafrost’.  Now of course it is emitting methane and we had the edifying spectacle of Chris thrusting a spear into the ice to release the methane which was duly ignited with a blow torch.  Great fun!  Fry neglected to tell us at what point in the last thousand years Goldstream Lake ceased being permafrost and became the fly-fishing site that it is today.  Photographic evidence suggests it wasn’t in the last fifty or so years.

Still no news from Brad on his search, so it was off to the town of North Pole where they met Councillor Santa Claus and visited the Ice Museum at Chena Hot Springs. The frustrated duo then embark on a helicopter ride to a glacier.  On the way Chris remarks: ‘There’s some irony in this – that we are flying in a helicopter to see a glacier and we’re talking about climate change, but we will be offsetting it’.  He didn’t say how, but good on you, Chris, I thought. But then I was prompted to wonder how much energy it takes to maintain an ice rink. Turns out it could be as much as 2,000,000 KwH per year.  If we accept that approximately 70% of electric worldwide is generated by fossil fuels, I estimate that this one ice rink would cause the emission of 700 tons of CO2 per year.  So, Chris’s climate debt after 45 years, even allowing for the fact that he doesn’t use the rink all the time and that he’s not the only one using it, must by now be pretty substantial.  And, of course, it would have to include a percentage of the debt accumulated by every kid he’s inspired to take up this planet-ravaging sport.  I wonder how he’s offsetting that?

Anyway, deposited safely on the glacier, they have a great time communing with the ice and, eventually, find a small ice-rink size patch of clear ice upon which they can perform a simple routine.  Unfortunately, although as deep in nature as you could possibly get, the ice is too lumpy for serious ice dancing.  A small patch of ice in the middle of a constantly moving glacier has lumps in it?  Who’d have thought?

Now back in Anchorage, the couple meet up with an Inuit climate activist from the town of Shishmaref on the island of Sarichef, in the Chuchki Sea.  It is suffering major impacts from the effects of climate change, he tells them. The two particular problems are that sea ice which buffers the shoreline, and helps protect it from storms, is melting earlier and that melting permafrost underneath the town is causing erosion.  There is no doubt that this is a major problem for the local residents but says nothing about what is causing the melting.  There is a proposal to move the village to the mainland but it is notable that relocation of the village, because if this erosion problem, was proposed as early as 1975.

Finally, we get good news from Brad.  They meet in a cafe where he tells them he has been looking all over Central Southern Alaska and has found a lake that might prove suitable.  ‘One lake in all of Alaska!’ they exclaim in amazement.  OMG, the power of climate change is unstoppable, is the unspoken thought.  Jayne and Chris do, however, give voice to their concerns on the drive to Weiner Lake.  ‘As a parent, I worry what the future holds for our kids’, Chris tells Jayne.

The lake is, of course, by now covered with snow but a herculean effort by the team until well into the night, shovelling snow and smoothing the ice with a butane powered heater, yields the pair a beautiful ice-rinks size area upon which, next morning, they duly fulfil their dream and entertain us with a flawless (at least to my eyes) performance of Bolero.

Weiner Lake is not a lot further from Anchorage than Bonnie Lake, so I wondered why they couldn’t have applied the blowtorch to Bonnie Lake on day two, to remove the unwanted texture, and got the job over and done with in a few days.  Actually, you and I both know why.

Apart from the fact that Torvill and Dean have still got it as far as ice dancing is concerned and have now got it as far as climate change is concerned, my overwhelming impression of the show was that I saw a hell of a lot of snow and ice.  Rather reminded me of Professor Chris Turney and his ship of fools. Remember them? They set sail for the Antarctic to observe the ice that wasn’t there and became firmly stuck in it.

Early on in the show, about when the pair boarded the train to Fairbanks, I said to my wife, ‘This is a joke’.  It’s not, of course, it’s very powerful propaganda.

6 thoughts on “Absurdity Puts Its Skates On”

Reichsfuehrers of the Climate Con Job