The Warning in Mount Warning’s Closure

Until the ascent was closed, visitor numbers at Mount Warning had been growing for some time, so the NSW National Parks and Wildlife Service (NPWS), honouring the bureaucratic ideal, felt compelled to shut it down. Prior to 2019, annual visitation was around 100,000, with most intent on doing the summit walk and accessing those remarkable views of the Tweed Valley and coast (above, at dawn). The summit walk is a bucket list item for many and deservedly so. It’s a remarkable experience, a crown jewel of the natural world and our north coast.

Despite the increase in visitor numbers, the trail and lookouts have been grossly neglected and require the restoration of what should be basic and routine maintenance, plus additional repairs to ensure facilities  remain in a serviceable state. The park’s current condition is a disgrace, an 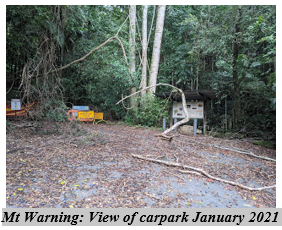 insult to the many volunteers who have invested love and sweat caring for the trail since it was completed in 1909. Were the NPWS capable of embarrassment, its scandalous stewardship of Mt Warning would see faces turn darkest vermilion, Environment Minister Matt Kean’s the deepest red of all.

What are the values of a minister and an organisation that would allow this to happen? Here we have what many would regard as one of the premier experiences of nature anywhere in the world. Yet those specifically tasked with managing it on our behalf are not only wilfully blind to its needs, they are actively seeking to close it down. Sadly our politicians, again starting from the top with Minister Kean, are allowing this to happen.

Were it run with pride, either by government or privately with an entry fee, you might see improvements to the car parking area, the track surface, regular maintenance, better toilets and more rubbish bins. There would be improvements to the summit lookouts to accommodate more visitors, bearing in mind there would be limits on their numbers at peak times (through a ticketing system that might feature offerings along the lines of a ‘sunrise walk premium ticket’). At the base, and likely stocking a range of Wollumbin souvenirs (hopefully made by locals, not  Chinese slave labourers), a coffee shop would be a positive addition.  The drystone walls and stairs built by volunteers in the early 1900s would be showcased, cleaned up a plaque installed to honour their efforts. Privately run tours would focus on rock climbing or abseiling, overnight camping, additional walks, mountain bike trails and more. The area has huge potential as an eco-adventure park — and it could all be achieved without diminishing the natural treasure that Mount Warning is.

This wonderful vision has no chance of seeing the light of day because the place is controlled by ashen-faced, lard-arsed bureaucrats whose main interest, it seems, aside from seeing the place closed, is to make management as easy as possible for themselves. Forget the palaver about “cultural reasons” for ending access. The goal here is to eliminate as many of those pesky visitors as possible, with the ultimate objective being to remove them altogether. It is as if the NPWS pen-pushers are taking their inspiration from the Yes, Minister episode in which Sir Humphrey explains why a hospital with no patients represents the acme of efficiency.

All this may seem farcical but denying Australians access to Mt Warning’s wonders is the aim of the NPWS, and likely at other parks as well. Other park bureaucracies in Australia appear to have similar goals — just look at what Parks Victoria is doing in the Grampians to discourage rock climbers. Look at what the ban on climbing Ayers Rock has done to visitor numbers.

In bureaucratspeak, what is being perpetrated against Mt Warning is “demarketing”. According to Southern Cross University’s Betty Weiler et al:

The NSW National Parks and Wildlife Service (NPWS), the agency responsible for managing Wollumbin National Park, is actively looking for ways to reduce visitor numbers to the summit, including judicious use of demarketing approaches to achieve this goal. Demarketing involves the adaptation of marketing theory and principles for the purposes of managing consumer behaviour, usually with the aim of decreasing and thus reducing the negative consequences of consumption.

… As noted earlier the park management agency (NSW NPWS) no longer promotes the summit experience and it has also passively discouraged visitation by lack of action on access, parking and commercial operations (noting that most parking options are not within park boundaries and thus outside of NPWS jurisdiction).

So, rather than doing the hard yards and petitioning the government for funding appropriate to the level required to manage the park responsibly, NSW’s Parks authorities conceal their intent beneath layer upon layer of bulldust. It is instructive to compare and contrast the information NPWS once provided on its webpage with what it has to say today. In 1998, in the infancy of the internet, Wollumbin National Park got a short and glowing description, as I discovered by trawling the internet archive available via Wayback Machine. Back then then it was lauded as “a fantastic walk” with “dazzling views”. It’s a simple, honest description.

In 2021 the message from NPWS brings to mind a Taliban guide to the Bamiyan Buddhas. There is no mention whatsoever of the extraordinary summit views. Indeed, what the NPWS’ rated a “fantastic walk” in 1998 is now depicted as a threat to healthy and safety, hence the purported need for it to be “closed due to significant safety issues”. Here let me report on my recent and highly unauthorised visit in January to the park and summit, where I found that even without the climbing chain, which NPWS has removed in the cause of demarketing, the ascent is as safe as other Grade 5 bushwalks in NSW that are currently open (at least for now). Here is how the NPWS warns off visitors. The climb, it states

How long can it be before we see the NPWS desk jockeys apply the demarketing treatment to other walks they manage. The website message intended to entice tourists to NSW currently reads like this:

Applying the NPWS demarketing treatment, it will come as no surprise to see it rewritten thus:

With its hazard ridden National Parks, funnel-web infested vineyards and beaches notorious for shark attacks, don’t even think about coming to NSW.

The Mt Warning National Park opened in 1929 and was dedicated for public recreation and as a sanctuary for wildlife  and flora. Speaking at the opening ceremony at the summit local Alderman A. B. Black said

…the day was one upon which they could all look back as a day on which good work had been done for Australia. He urged the boys and girls to remember that the park was theirs, and that each could be a trustee in his or her own little way.

The park was a memorial of the beauty of Nature and of the beautiful way in which God had blessed the Tweed and the people of Australia.

How dare the current managers insult, demean and disparage the wonderful sentiments expressed over a hundred years ago with their charade of caring for a treasure of breathtaking beauty that belongs not to them but to all the people of Australia.

Forget Minister Kean, we need some adults to step in and take responsibility. The park and the people of NSW deserve better.

NOTE: If you want to see what might be possible, and what a government-run National Parks service is capable of, then look up Zion National Park in Utah.

How Green Zealots Take Over Councils