No Gusts, No Glory 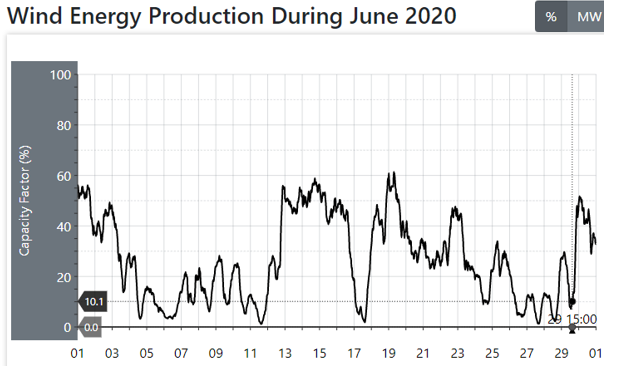 Imagine a massive irrigation project to make the deserts bloom with a gigantic network of headworks, dams, irrigation channels and pumping stations to encourage farmers to move in and reap a bountiful harvest of food and fibre from a vast expanse of well-watered countryside. The food will be cheaper too! After all, the water and the land are free.

But there’s is a problem. With the burgeoning infrastructure well advanced, very visible and much bally-hooed by an eagerly unquestioning media it turns out that there isn’t enough water much of the time and the freshly planted seedlings die. The people will not starve because food is still being produced from the farmland that was there before the irrigation scheme started. But now that food is costing twice as much.

Tragically this is not a hypothetical scenario because it applies to the Wind Power Project that was launched to achieve the (upwardly mobile) Renewable Energy Target.

There are frequent and prolonged “wind droughts” that we can measure using the output  from some 70 wind farms and over 2000 turbines across South Eastern Australia, all connected to the grid of the National Energy Market and monitored by the Australian Energy Market Operator.

The chart atop this post shows the percentage of the installed capacity of the system that was delivered hour by hour over the month.  The line drawn at 10 per cent indicates the periods when the supply was a tenth or less of the 7.8 Gigawatts of installed capacity.

The reason for talking about choke points is to drive home the fact that the critical indicator of the wind supply that we need to monitor is the low points, not the high points, not the total installed capacity and  not the average delivery.

What has happened here?

The “failed irrigation scheme” scenario suggests that ‘someone has blundered‘, as Tennyson famously wrote in The Charge of the Light Brigade. Was information on the frequency and duration of wind droughts available before the  government decided to back wind power and RE at large with subsidies and mandates to use power from intermittent sources?

Still, regardless of this discovery, all the Australian states are pressing on with ambitious plans to put more resources into the windpower equivalents of irrigation headworks, dams, channels and pumping stations.

Why in Australia, of all places?

Australia is leading the world in the rush to “clean energy” but this is a serious mistake for two other reasons in addition to the problem of wind droughts. First, Australia is an island. Practically every other industrialized country in the world has neighbours to provide power when wind and solar power are in short supply.  European countries can turn to France for nuclear energy, the Scandinavian states for hydro, Poland for coal and Russia for gas. Every kind of power feeds into the North American grid, but in Australia we are on our own.

Elon Musk created a media sensation when he installed a big Tesla battery in South Australia in record time. The big battery has been hailed as a great contribution to the green transition but it is important to realise how small it is compared with the demand of the grid.

It is a remarkable piece of technology, occupying a hectare of space and carrying a price tag of $60 million. It is attached to the Hornsdale No 3 windfarm (100MW rated capacity) and it stores 109 megawat Hours (MWh) of power. That means it can maintain a flow of 100MW from the farm for a little over an hour after the wind stops.

By comparison, the SA grid requires a flow ranging from 1000Mw to 2000MW depending on the time of day. So if the wind stops for an hour the grid needs at least 1000MWh.  How far does 109MWh support the grid in that situation?

Pumped Hydro is the other great hope for storage and the showpiece is Snowy 2.0 that is planned to deliver 2000MW of power continuously, matching a large coal-fired power station such as Bayswater in NSW. In the real world this offers no more  hope than big batteries. For a start, Snowy 2.0 is not a primary generator because  the power that flows from it will come originally from a fleet of  solar and wind farms. It is designed to regulate the lumpy RE input and deliver a steady supply. Unfortunately, between 30 per cent and 40 per cent of the original power is lost in the pumping and pipe resistance. The projected cost is enormous, far beyond the original estimate and it may never be built due to the expensive, unforeseen problems in the construction and the damage to the national park.

And if Snowy 2.0 is completed, along with the extra wind turbines to go with it, just 2,000MW of our existing 20,000MW of coal-fired capacity will be replaced. All we need is a few more mountain ranges with reliable rainfall — nine of them, to be precise — to replace the other 18GW of coal power.

In perhaps more urgent need of replacement is a political class as useless as the renewable energy it champions.