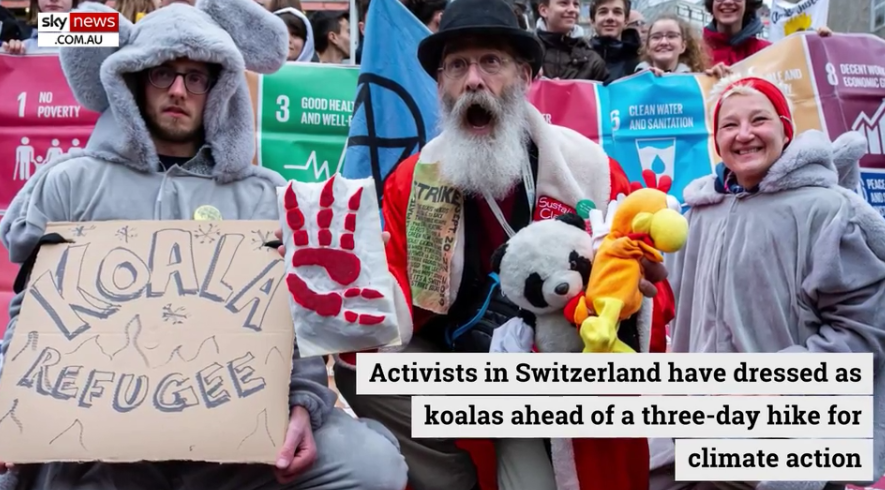 Here is a question for an authority on etiquette, someone like that late arbiter of the beau monde Sheila Scotter, stately, poised, every social grace at her fingertips. What is the correct reaction when friends overseas bombard you with email links to rants in leftist newspapers blaming our recent bushfires on “global warming”? Reply with a courteous note of thanks for the enlightenment intended? Respond with reasoned argument? A waste of time; you  might as well argue with a flat-earther or a feminist. Write back and tell them to stop this nuisance since we have already had as much climate nonsense from our own media over the last few months to last a lifetime?

It is a dilemma, and one that gives every indication of continuing long after the fire season. The horrifying destruction has not only attracted a level of overseas attention far beyond any such disasters here in the past, more even than worse fires with much greater loss of life, but it has given the media and officialdom the opportunity to whip up public perception of danger on an epic scale, so that even hundreds of kilometres from the fires one encountered normally sane people acting as though they were in the war, getting round in face masks like Londoners staggering through the Blitz. Climate evangelists will not willingly let go of such an opportunity to spruik their message. We can expect lots more of the same.

One doesn’t wish to be cynical, but these fires have been a gift to the Marxist fantasists who manipulate the international climate conspiracy for their own ideological ends and the useful idiots who parrot their apocalyptic predictions in the media and elsewhere. So many of their earlier prophecies have not worked out according to the script, what with polar bears proliferating rather than on their way to extinction, metropolitan dams nicely filled instead of dry, typhoons diminishing in frequency – in short a dearth of disasters demonstrable as warming-related.

Then suddenly here was real disaster, in a time of drought, ergo a clear case of the climate getting its own back on us for our unremitting abuse of the planet, with spectacular untameable flames that the catastrophists could point to and say, “Look, this is what not reducing carbon emissions leads to. We told you so.” Normally the international media couldn’t care less about what happens in Australia – try finding any Australian news in the press in Italy or Canada – but the fires have changed all that, because Australia just happened to be the place where climate alarmists could at long last assert that here, made visible and immediate in the eyes of the world, was the terrifying result of ignoring their warnings. (They tried it with the Brazilian fires last year but for some reason without the same impact.) The media, ever cooperative with prophets of climate doom, went into overdrive to make sure that this time no one, anywhere, could possibly miss the message. Hence the emailed prognostications of further doom from friends abroad (with at times implied reproach for one’s own less than wholehearted acceptance of the alarmist thesis).

In Sheila’s unavoidable absence I decided that for the time being the best thing to do was nothing. Reasoned argument – especially the point that these fires burnt with unprecedented ferocity partly because of lunatic Green policies that prohibit traditional fire prevention practices, policies dreamt up by ignorant urban-dwellers – wouldn’t get me anywhere, even if I were a scientist and in possession of incontrovertible proof. It would be like arguing with a flat-earther, or a feminist. Besides, these are friendships of long standing that I don’t want to lose, and one has heard so much about friends rent asunder over Trump or Brexit. At the same time it can be chastening to have the degree to which your friends understand you revealed by the choice of article they send. One recommended a piece from the Guardian, a paper I would have thought he knew from immemorial discussions that I never willingly read because it is both unreliable and irredeemably sunk in prejudiced leftishness.

Another was pushing a piece from the New York Times, entitled, in the voice of sweet reason and moderation that publication is renowned for, “Australia is Committing Climate Suicide” (“As record fires rage, the country’s leaders seem intent on sending it to its doom”). It was difficult to judge which was the more feverish: the Guardian piece, a jeremiad against Australia’s alleged disproportionate numbers of “climate deniers” written by an “energy and climate science communicator” in Norway (it might as well have been by Greta’s father next door in Sweden, who apparently has been dictating her petulant little tweets) or the New York Times’s contribution, complete with snipe at Scott Morrison, composed a bit nearer the scene of its subject, in Tasmania, by Richard Flanagan, described as a novelist. His gripping style is evident from the start.

Australia today is ground zero (Ground Zero! Where nearly 3000 died!) for the climate catastrophe. Its glorious Great Barrier Reef is dying, its world-heritage rain forests are burning, its giant kelp forests have largely vanished, numerous towns have run out of water or are about to, and now the vast continent is burning on a scale never before seen.

Of course, Richard’s efforts to foment panic (the Barrier Reef is quite healthy, according to the federal environment minister; the towns hadn’t run out of water and didn’t, and anyway that’s a cyclical drought problem, far from new, and so on) are wasted if you don’t buy the climate-caused-the-fires spiel. And it’s astonishing that any reasonable individual can, given the climate alarmists’ record of inaccuracy. Look around you. Are the waves at the beach any higher? Is the water creeping further up the sand any more than you might expect from natural erosion (or receding, come to that, since erosion can work both ways)? Is it really hotter, with higher temperatures for longer, than you remember? Are storms worse, rain more rare?

Climate soothsayers do not publicise their errors of prediction, and the mainstream media, loyally, declines to hold them to account, so we tend to forget just how wrong they can be. As a reminder, here’s a vintage piece unearthed by British journalist Daniel Hannan from – once again – the Guardian, which clearly has a venerable tradition of climate hyperbole, since this example was published in 1999. The writer, one Jamie Wilson, these days the Guardian’s head of international news, warned his readers that if they didn’t get their climate act together

Spain will be ridden with malaria, the eastern Mediterranean will be as hot as the Sahara desert, flash floods will swamp parts of the American coastline and there will be almost no snow in the Alps.

This is the doomsday scenario painted in a new report on the effects of global warming on 10 of the planet’s most popular tourist destinations in the next century.

The study, commissioned by the World Wild Fund for Nature, found that profitable tourist destinations could be turned into “holiday horror stories”.

Horror stories indeed, but fiction. Just so much sound and fury; tales told by idiots, signifying nothing. The “new report” referred to, called Climate change and its impacts on tourism, was the work of – who else? – dodgy scientists at the University of East Anglia’s climatic research unit, already at it ten years before they were caught out skewing the data to make climate change more scary to the public.

Jamie gives the impression of lingering long and lovingly over his catalogue of catastrophe:

Winter tourism will be affected in the Alps and other European skiing destinations from the impact of less snowfall and shorter skiing seasons.

Safari holidays in east and southern Africa may also be affected as droughts and changes in temperature alter the distribution of wildlife.

And just when is this curse to come upon the world? Surprise, surprise, this year.

By 2020, visitors to the Costa del Sol could risk contracting malaria as global warming brings more frequent heatwaves, making the country a suitable habitat for malaria-bearing mosquitoes, while increases in summer temperatures to more than 40C (104F) could make parts of Turkey and Greece no-go areas in July and August.

A few enquiries elicit the reassurance that the Costa del Sol is still tolerably malaria-free, the eastern Mediterranean is still receiving vast numbers of tourists and skiing resorts in Europe this (northern) winter are crowded as usual with everywhere else either doing fine or looking forward to a bumper season.

The East Anglia data-tinkerers even spared a pre-bushfires thought for Australia.

The report says that a decline in cloud cover over Australia will increase exposure to the sun’s harmful rays, increasing the risk of sunburn and skin cancer.

It can’t increase exposure to the rays if you don’t go out in them. Anyway, whatever happened to hats and slip, slop, slap?

This prompts the thought that possibly, to return to a point of etiquette, Miss Scotter might not have approved of the practice of appearing in public semi-naked except for smearings of creams and lotions, any more than she would sanction today’s habit of disfiguring oneself like a savage with tattoos. But as an exercise in tact I hope she would give her imprimatur to the answer I have devised to my original question: by all means send your links and attachments, but put them aside for a decade or so first to see whether events will have borne them out.

8 thoughts on “The Flame Blame Game”

When Liberals Gussy Up in Green Drag