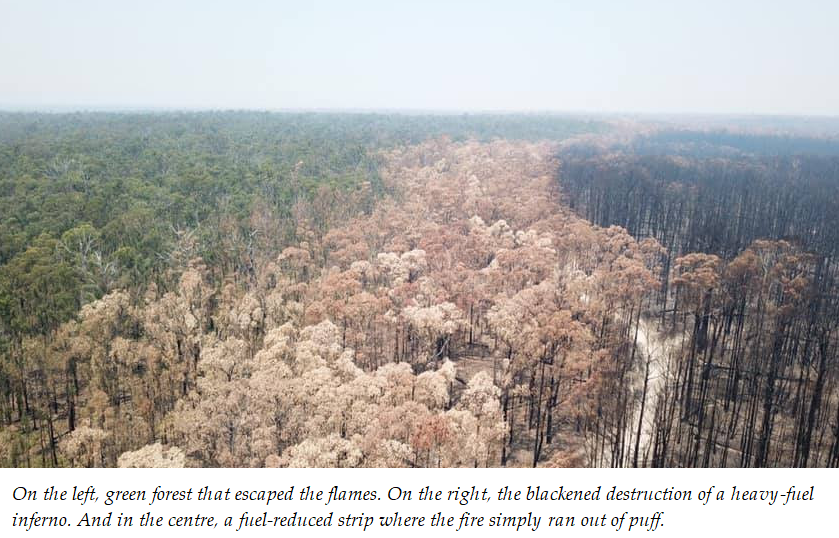 Considerable publicity has been given to an article by Byron Lamont and Tianhua He titled ‘Why prescribed burns don’t stop wildfires’. The authors are academics from Curtin University in Western Australia, the former a botanist and the latter a molecular biologist. They argue against the use of fuel reduction burning in bushfire management,  informing readers of Nine’s online news sites that it does not stop bushfires. Here is the nub of their claim:

It may seem counter-intuitive but the longer old-growth forests remain fire-free, the less combustible they become. The thicker canopy creates more shade, the undergrowth becomes thinner and less vigorous – and hence there is less fuel for fires.

What the article exposes is the authors’ lack of experience and operational understanding of fire behaviour. They have not got the faintest appreciation of how a prescribed burning program works, or how bushfires are controlled. Their baseless opinions, if given any credibility, would give rise to dangerous fire management policies, a continuation of the cycle of devastating bushfires in Australia, and to further loss of lives and beautiful forests.

The title of their article is a clue to the duo’s utter lack of understanding. Fuel reduction burning is not designed to “stop wildfires”. The purpose is to make them easier, safer and cheaper to control. Experienced land managers, firefighters, and bushfire scientists are in no doubt about this. The scientific, experiential and historical evidence all demonstrate that prescribed burning, done properly, is highly effective at mitigating the bushfire threat, and assists with the control of fires even under severe weather conditions.

Identifying the flaws in the academics’ argument takes only a few seconds. Firstly, Professor Lamont and Dr He ignore fire science. Reducing fuel loads and simplifying fuel structures by regular burning reduces the speed of a bushfire, its intensity, the size of the flames and its ember and spotting potential. All of this makes bushfires easier to put out and less damaging. In mature forests, crown fires cannot be sustained if the surface and near-surface fuels are at low levels as a result of regular fuel-reduction burning.

Professor Lamont and Dr He make the extraordinary assertion that long-unburnt forest fuels are of low flammability and therefore of no significant threat to communities. This is not only demonstrably untrue, it is dangerously wrong.

For example, in long-unburnt karri forest, much of the live, green understorey dies and becomes dry fuel on the forest floor after about 25-30 years. Bushfires are most likely to occur well before that time. Dead scrub, together with accumulated dead leaves, twigs and bark can be a metre or more deep, with total fuel loads of up to 50 tonnes per hectare.

We have studied actual fuel measurements in forests all over Australia and never once have we found a situation where the forests become non-flammable in time. The reverse is the case.

Second, Professor Lamont and Dr He ignore the real-world experience of generations of land managers and firefighters. We know of hundreds of examples where prescribed burning has ‘saved the day’. Hot fires ran into areas of low fuel and the resulting reduced fire behaviour enabled firefighters to gain the upper hand. Conversely, we can cite numerous recent examples where a lack of prescribed burning has resulted in unstoppable fires and considerable losses.

Ask any firefighter if they would rather fight a bushfire in four-year-old fuels or in forty-year-old fuels? We know what the answer will be, but academics like Professor Lamont and Dr He disdain the experience of bushmen and experienced firefighters, seemingly preferring computer models developed on a green and leafy campus. In doing so they reject the experience of real-world Australians over the past 200 years.

Third, Professor Lamont and Dr He seem never to have studied bushfire history. There are almost 60 years of historical data from the forests of south-west WA, and this shows unequivocally that when the area of prescribed burning trends down, the area burnt by bushfire trends up. There is a simple explanation: bushfires are more difficult to put out in heavy fuels. The area burnt by wildfire escalates rapidly when the area of prescribed burning in a region falls below about 8 per cent per annum.

Finally, Professor Lamont and Dr He have no understanding of the strategic planning involved in a prescribed burning program. To be effective, the burning must be strategic. The fuel reduction cells need to be large enough to ensure a sufficient area for the spread of a bushfire to be slowed and controlled. Burns must be bounded by roads or tracks to enable rapid access by firefighters and the edges to be mopped up.

Burning must be done to appropriate standards of fuel removal and fire intensity. Prescribed burns that are too patchy, too small or too narrow may not slow a bushfire, and in some forests, burns that are too hot can stimulate the regeneration of dense scrub.

If the authorities were to take any notice of the assertions by Professor Lamont and Dr He and curtail the fuel reduction program, the result in WA would be identical to that currently occurring in NSW – in other words, death, massive destruction, and heartbreak. Our advice to these two tenants i9n academia’s ivory tower is to get some actual fire experience in the bush, spend time on the back of a fire truck or the end of a hose, and then let’s see what they think about the value of fuel reduction in assisting with bushfire control.

Dr Neil Burrows has 42 years experience as a bushfire scientist, fire investigator, fire policy advisor and fire behaviour analyst in incident management teams. Rick Sneeuwjagt has 50 years experience in bushfire research and management at district, regional, state and national levels. The above article is an edited version of a column originally published at the Bushfire Volunteers website