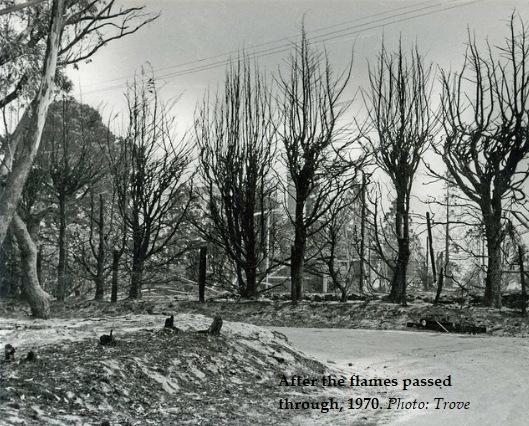 Prime Minister Scott Morrison recently visited what is left of the NSW town of Cobargo, where he was roundly abused by bush ferals. That barrage of obscenity delighted the accompanying media hacks, who amplified a few locals’ vitriol by parroting the Labor-Greens line that the Prime Minister was somehow to blame as a consequence of his evidencing insufficient concern about “climate change”. The fact that forest management and fire fighting is a state responsibility rated barely a mention in news coverage.

What also wasn’t reported was one of the great Australian tragedies — the deliberate destruction during the decade after about 1985 of the forestry profession and the state forestry agencies with their experienced and dedicated staff.

State forests were converted to national parks. Instead of tough, experienced operators like those described in Terry Beath’s first-person account below, fire was turned over to park rangers and ecologists, few of whom had any bushfire know-how. Firefighting became the job mostly of volunteers. Worse than that, the “vollies” (whose courage and dedication cannot be questioned) found themselves fighting forest fires burning in heavy fuels.

In other words, being asked to do the impossible.

Below you will find an account of another fire that descended on Cobargo and was repelled.

I cannot see any chance of any state governments reinstating professional forest management as it once was. But the parks and wildlife agencies could be reformed, and required to adopt policies and management plans protecting the parks (and neighboring communities) from being ravaged by fires. A tried and tested model exists, and there are still a few of us around who remember it.          –Roger Underwood

A Night in the Life of a Sub-district Forester

JUST a couple of years out of university and still a young and rapidly-learning forester, I found fire suppression exciting but mostly nerve-wracking. Some of the memories have now faded, but there is one night that is firmly in my memory. It was the occasion, back in 1972, when it was up to me to decide whether or not to light up a backburn along more than five kilometres of hastily pushed-through fire trail in behind Cobargo on the NSW South Coast. I was part of the team trying to contain three large fires burning in our district at that time, and this one was mine.

“Will I, won’t I? What if the weather report isn’t right? They say they don’t ‘expect’ winds tomorrow down here; but they are often wrong. What if the backburn gets away with a north-wester behind it? It would take it straight through Cobargo township; and I’ve got limited resources as we’ve got three different fire operations underway; Dave (my boss) and the boys have got their hands full elsewhere, and Eden also has problems so they can’t spare anything”.

All these questions and others were running through my mind as I weighed up the best thing to do.

We’d spent two days trying to get in close and keep the fire small, but the country was rough and inaccessible, so while keeping part of my crew nibbling at the edges, the rest of us worked with a small dozer and a grader trying to put in a break along the main ridge in front of the fire. This would allow us to get tankers in to help with a backburn. Behind the machines, the crew were using McLeod rake-hoes to clear around stringy barks on the fire side of our break. We didn’t want them ignited by the back burn and sending embers across the trail. Smaller bushes were also knocked over with brush-hooks or axes to reduce fuel heights near the fire trail to as to reduce flame height and intensity.

The night seemed calm enough, just a slight breeze. I drove the rough new trail for the second time with Tony and Tommy, my two foremen. They were experienced firefighters, but in the end it was my call. I marshalled the whole team (about ten, with their Bedford heavy tanker and three slip-on units) for a final briefing. Everyone had a cup of tea and sandwich while I radioed the office to check for any changes to the weather forecast. It had cooled down, but that didn’t mean I didn’t have a bit of a shake-up and a dry mouth.

Then, with heart in mouth, I asked Tony and Tommy if they had the back-burning torches and fuel ready. They did. Tony mixed the fuel we were to use. Kerosene was the prescribed fuel for drip torches, but the boys told me it was a pain in the arse as it meant too slow a light-up on a long job at night. About 25 per cent standard petrol was added to the kero, and the mix was duly loaded up.

I gave the go-ahead, saying “We’re starting on the eastern side, here we go, keep an eye out for the jump-overs! Tony, you’re away!” And off he went, hanging off his vehicle, door open, torch dripping rocket fuel and steadily igniting the edge of the trail. No turning back now. The burn was slow to get away as it burned into the wind and towards the approaching fire. Patrolling the fire trail we were in the eye-stinging smoke the whole time. A few of the blokes used their handkerchiefs as face masks.

However, it seemed to be behaving reasonably well, so Tony accelerated ahead of us. As he moved on, the crew fell in behind, patrolling the line like the well-disciplined firefighters they were. Tommy was resplendent in his canary-yellow Land Rover, supervising the patrol.

It was then down to watch-and-chase, seeking jump-overs and destroying them. It went well; there were several jump-overs, but we were quickly onto them. Rake-hoes and water are a great combination – but it is hard, uncomfortable work, and you are in constant, eye-watering smoke.

After a couple of hours I received a report that a large, partly-hollowed stringybark about fifteen metres in from the trail had a fire up its pipe and was cascading sparks and embers across the break.

Tony was experienced, but sometimes a bit wild. First he ordered up the Bedford tanker as its main pump had a Holden six-cylinder motor and could squirt higher than our little slip-on units. They tried to wet the tree down, but it was obviously going to be a major problem. Tony then grabbed a chainsaw, told everyone else to get to buggery, but to keep spraying up high. Then he disappeared into the smoke and started the extremely dangerous task of felling a three-legged buttress with a fire up its belly.

We held our breaths as he sawed away in the smoke, showered by falling embers and dripping charcoal-tainted water. I was probably more nervous than when deciding to start the backburn, and when the old mongrel tree finally went down we were onto it like a mob of bees onto a bulldozer operator who had just disturbed their nest. Another problem fixed.

By midnight things were quietening down, so I halved the crew and sent half home for a six hour break, the rest of us remaining to enjoy the smoke and cool night air as we patrolled and caught any spot fires.

Have you ever seen a bushfire at night? It’s amazing how many burning embers you can see flying around, streaming across your breaks, and is quite spectacular. Fortunately most don’t ignite anything otherwise the job would be impossible.

The boys gathered after a mini-break, partly refreshed but still ready to go. After a quick tour and final briefing of the night crew I headed home for a few hours rest to prepare me for whatever the afternoon presented.

The backburn was a success, and the next day the fire burned itself out. I hadn’t burned Cobargo township to the ground. Tony hadn’t blown us up with his rocket fuel, or been killed by a widow-maker from that mongrel tree. All that remained was two days of clearing the fine black dust from my nose and the smell of smoke that seemed to permeate my entire being.

I was so proud of my men. Bill O’Shea’s Bermagui pub seemed like the ideal place to wash the smoke and tiredness away. There we ended up, and did just that.

ETS or another GST?

The ‘Broad Church’ and its Termites