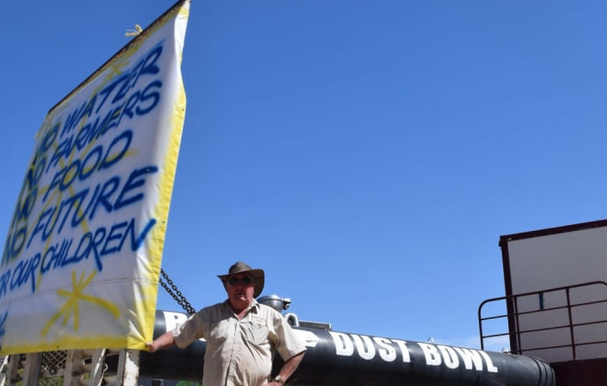 Earlier this week some 3,000 irrigators and their supporters rallied in Canberra against government policy on Murray-Darling irrigation and management.  With the  cacophony of dozens of semi-trailers’ blaring horns, it was certainly noisy. Ominously for the National Party, their representatives were treated with considerable hostility, particular anger being directed at water Minister David Littleproud. Enduring the jeers, the Nationals would have been especially dismayed at the warm welcome for Pauline Hanson and Malcolm Roberts.

The current drought has exacerbated a contrived water shortage that government policy has engineered in the Murray. Having set a cap on water extractions in 1999 — roughly a third of the average flow — the productive uses of this “working river” have been gradually reduced.  As a supplier of a vital agricultural input to a formerly barren area that grew to supply 40 per cent of the nation’s farm produce, the river has been de-rated.  At a cost of $13 billion, some 20 per cent of the flow has been diverted to “environmental” use. This has caused a five- to ten-fold increase in the price and forced thousands of farms out of business.

The farmers’ travails fundamentally result from the actions of Canberra governments, which have seized control of the system. Policies were developed by Malcolm Turnbull as environment and water minister in 2007, and he subsequently supported policies championed by the Rudd government’s water minister, environmental activist Tony Burke.

This is in addition to the water already ‘wasted to create and sustain artificial fresh-water lakes at the Murray mouth, that squandered water could have increased irrigation supplies by 20 per cent.  Once the cap on water extractions for irrigation was agreed, the better use of the water used for creating artificial freshwater lakes at the Murray mouth could have been considered.  But environmental activists, led by the Wentworth Group, were in the ascendant, supported by media readily conned into believing irrigation was bleeding the land of its nutrients and destroying the environment, a myth exacerbated and compounded by the global warming fabrication and ongoing hysteria. Turnbull was and remains a natural supporter of such fashionable themes, pregnant as they are with the need for government controls.

The current destructive policies in reducing farmers’ water supply have driven up prices, with existential adverse impacts on more marginal farming such as dairy. But a feature of the 2007 Water Act was to divorce farms’ land and water assets, facilitating the trading of water rights on permanent and annual bases.

This has led to “speculators” buying the water rights for on-sale.  Such actions bring about a more efficient usage of the water, but populists are inclined to blame their adversities on middlemen — and this is the case with water in the Murray Darling Basin.  The formal divorce of water and land property rights under the Water Act has expedited the re-allocation of water to where it is most valuable, especially in almond plantations in the south.  This has also led to a transmission problem in getting sufficient supplies to new owners, a process that was poorly managed by the Basin Authority, causing massive fish deaths even as forests were flooded.

The solution to restore and build upon the MDB’s pre-2007 prosperity is to return the 20 per cent of the water taken from irrigation and seek further expansions by examining changes to the water flushed down the river to create those artificial lakes at the Murray mouth.

But there is every possibility the outcome will be a further reversal of efficiency. In this respect the besieged Minister Littleproud is seeking to offer restraints on trading saying water is “a source of all life, and the evolution of this market may have taken us to a point that isn’t in the national interest.”  He wants a review of inter-state water sharing arrangements. The National Farmers Federation, keen to restore a fractured relationship with the farmers, is also arguing for a re-allocation of the supplies between the states.  Similarly, NSW wants such a review but this is opposed by South Australia, which has for a century enjoyed a larger share than its size and flow contribution merits.

More constructively, Barnaby Joyce, seeking a political resurrection, is discussing pulling back the environmental flows.  But the danger is that, aside from improving the transmission arrangements that caused the excessive flow transfers through the crucial Barmah Choke, all we will see is the present environmental flows endorsed, and readied for further increases, together with taxpayer money to buy out some of South Australia’s allocation.