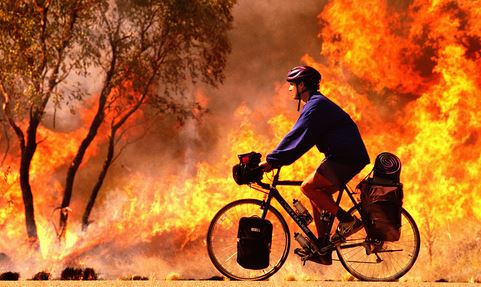 Victoria is the vanguard of states in major struggles over the control and use of public lands.  These comprise around 35 per cent of the state, the majority of which is in parks and reserves that aim to minimise human impact. Such areas have long been seen as under-managed and infested with exotic flora and fauna. They are increasingly recognised as perilous host to ferocious and destructive fires.

The rest of the public land is state forest, traditionally available for forestry, grazing, mining and a whole range of leisure activities such car rallies, hunting, horse riding, camping and dog walking, none of which are generally permitted in National Parks.

Two developments are changing the nature of Victoria’s public lands. The first is increasing restrictions on the activities allowed in the state forests. Over the past 30 years governments have progressively constrained the use of the forests for timber harvesting and grazing.  Grazing has been all but eliminated and only 6 per cent of Victoria’s public forests are available for timber production, the annual harvesting area having been reduced from 25,000 hectares 40 years ago to just 3,000 hectares today.  Last week, the Andrews government announced a 2030 phase-out of all timber-getting in the state forests.

The second change is the conversion of state forest to national park and other conservation reserve categories.  This not only imposes restrictions on use but is also an essential step to converting the land to Aboriginal title, which unlike Native title, grants beneficial-use and veto rights over the activities and intentions of others.  Even within the remaining state forest, the government is moving to enhance designated Aboriginal groups’ influence by granting them controls over exploration licences.

To effect the transfer the title of the land to National Parks or similar classifications, the government funds the Victorian Environmental Assessment Council (VEAC), an environmental bureaucracy comprised largely of former eco-activists, to sequentially investigate regional areas. Under the guise of community engagement, VEAC acts largely at the behest of environmental activists and Aboriginal groups (see, for example, the latest annual report).  The latter are paid to rediscover long-dormant attachments to the area under investigation and, with the prospect of title and financial support for management, are quite naturally all in favour of a change.

VEAC also hires economic consultants, who over the course of several investigations have demonstrated a skill for divining how much people supposedly value land being redesignated as being exclusively for conservation. In their most recent investigation, applying an alchemistic methodology called “contingent valuation” VEAC’s consultants have estimated that the Victorian public would be willing to pay $247 million in order to convert 60,000 hectares of state forest in the Victorian Goldfields (the Central West) into National Park.

The valuation ($4600 per hectare) of restraining public use of public land is not based on some marginal change to land use.  It would be equally applicable to the whole of the state. Its logic means people would be willing to sterilise all of the 3,100,00 hectares of state forest from commercial and most leisure uses and consider themselves to be $14 billion better off as a result!  It would mean that, if half the state’s agricultural land were to be surrendered to non-uses, we, the people, would be better off! In addition, the consultants place a trivial value on the loss from preventing car rallies, hunting, horse riding and camping. They do so with little evidence of usages.

In the case of forestry, there has been a steady, politically-driven erosion of the area permitted to be harvested.  The Regional Forest Agreements at the turn of the century were supposed to have settled the conservation/harvesting split, but harvesting has since been reduced by three quarters.  The latest proposals envisage further reductions on the road to the total embargo.

VEAC’s consultants also argue against mining and prospecting and claim that future mineral discoveries are well-nigh impossible. This view about minerals is remarkable since the Geological Survey of Victoria estimates that half the state’s gold is yet to be found, and the area has hosted much mineral production in the past.  In relatively recent times, two major gold mines have been opened near the area – one of which, Fosterville, actually has the second-richest gold concentrations of any mine in the world and is presently producing at over one billion dollars per annum.  Moreover, entrepreneurs risking their own money take a different view to VEAC – expenditure in the 42 exploration licenses current in the area is around $9 million a year. A recent discovery in the area of a nugget worth $160,000 by an amateur prospector is further evidence of the region’s prospectivity. Uncovering any further hidden wealth would be foreclosed by reclassifying the land as National Park which VEAC have recommended.

So, we have a double whammy.  First, policies are being pursued to banish commercial and much leisure-use activities that have proven to be perfectly compatible with forest conservation.  Secondly, requiring the cessation of commercial forestry also means eliminating many of the roads, and thereby heavy machinery, essential to fight fires. It would be hard to devise a more destructive set of policies.

Several hundred regional forest workers have held a rally outside Parliament House to protest the new measures that will bring needless and counterproductive job losses.  Coalition MPs showed their solidarity, but with green philosophies dominating the bureaucracy and a state government  determined to court inner-city votes, the march to transform Victoria into an unproductive tinderbox continues apace.

Tricks of the climate trade