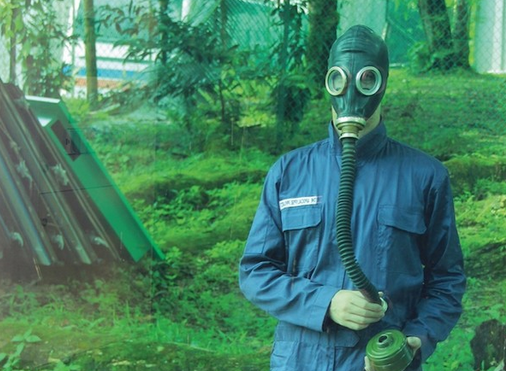 Few things beat the fun of lathering up under a hot shower. But how can any decent person forget  the  climate emergency beyond the shower screen? So here’s what you can do personally to save the planet: lather up with soap made from human poo.

Melbourne this month is enjoying an exhibition by artist Catherine Sarah Young (pictured above inside her gas mask) called the Sewer Soaperie, demonstrating how to turn raw sewage into luxury soaps.

She hopes the project will “raise awareness on the fatbergs [congealed muck] clogging sewer systems around the world, and how this will worsen flooding brought about by the more intense storms of the Anthropocene[1] … As the global climate crisis intensifies, could this be a solution to a more sustainable future?”

The exhibitors do warn you wash with their poo-soap at your own risk. If you’re timid, just stand back and sniff, inhaling aromas claimed as somewhere between cookies and cooked chook.

I was invited to visit the Sewer Soaperie by Melbourne University’s iconic Sustainable Society Institute  (MSSI), which claims in its latest newsletter that the show “mixes art and science to find creative solutions to our throwaway culture.”

“I was Pres of Academic Board, but finished my term over 2 years ago.  But I am still on the MSSI Advisory Board. And yes I would use poo soap – could you explain further! Cheers Rachel.”

So I briefed her about my encyclopaedic research on MSSI’s anti-capitalism and authoritarian yearnings, and feel somehow that Rachel and I have bonded. The Sewer Soaperie should courier her a complimentary pack of poo soap.

I like her better anyway than her astronomy colleague Brian Schmidt,  Nobelist and Vice-Chancellor of the very-woke ANU. On global warming, Brian is not the sharpest knife in the drawer. His view is that global warming (about 1degC so far since 1850) is as bad as nuclear war, and that the only threat worse than both is Donald Trump.[2] Actually, in 1976 I interviewed a woman in Hiroshima who as a schoolgirl was clearing rubble in the city when the bomb dropped. She survived, 20,000 other schoolgirls didn’t.[3] I don’t think she’d equate her experience with today’s global warming.

I mentioned to Rachel Webster yet another new book by Sustainable Society lecturer  Dr Sam Alexander. This time he’s with co-author Dr Rupert Read, who spouts philosophy at the University of East Anglia, of Climategate fame. The book  is cheerily titled This Civilisation is Finished.[4]

The pair seem to be My Little Pony fans, and want to return us to horseback:  “You cannot pre-figuratively re-centre local life onto walking, cycling, and horse-riding while elected politicians continue to worship the automobile.” However the book contains  darker green menaces from Rupert, such as

#  “It is just-about conceivable that this civilisation might survive by adopting an extremely disciplined eco-fascism.”

# “… Cuba or Costa Rica, two of the very few countries in the world today that it might possibly be argued are managing to achieve both ecological sustainability and some measure of economic justice.”

Read even has a kind word for Unabomber Ted Kaczynski’s theses. He describes Kaczynski, whose 16 bombings  murdered three and mutilated 23, as

…the uncompromising political thinker …who makes the discomforting and difficult-to-refute argument (in his Manifesto)  that socialism is the leading edge of the disastrous doctrines of ‘progress’ and ‘growth’,”  i.e. that socialism is not radical enough. It is only via a footnote by Read that we learn, “Obviously I don’t agree with his methods; I have always been a practitioner of strict non-violence, most recently in Extinction Rebellion.

Some of our universities are adopting the Robert French report’s urgings towards freedom of speech and open inquiry on campus. But in Read/Alexander book, Read actually boasts of inspiring the BBC last year to implement draconian censoring of any warming-sceptic views.[5]

Apologies, I have drifted from my topic of artist Catherine Sarah Young and her poo-soap. Heralded by an art magazine as one the world’s top ten “Future Greats”,  she also runs The Apocalypse Project, exploring the climate crisis and – surprisingly –  Climate Change Couture, or “Haute fashion for a hotter planet”.  The couture “draws on the disciplines of design and fashion to produce artworks in the form of wearable costumes that speak about what humans might have to do to adapt to climate change.”

Apocalypse-wear is certainly a new field for the hordes of otherwise-unemployable climate students in search of higher degrees. I didn’t intend to mess with Catherine or mention her readings in “Poetry Brothels”in Barcelona and New York. That was partly because she’s entitled to some artistic licence but mainly because she’s a second-degree taekwondo black belt.

However, she has a nasty habit of recruiting kids to her climate shenanigans. One project exhorted 13-year-old Austrian kids to write nasty letters to “science denialists”. The brief: “Why does it matter to you if people think climate change is not real, for example? How might you try to convince a climate change denier otherwise? How can you be persuasive without being patronizing?”

The fruits of her project are  Greta Thunberg-style missives from kids to “deniers” about the usual fictitious memes of dying polar bears and melting ice-caps (Arctic: stable for past half-decade, Antarctic: not melting at all). “Dear Denier of the Climate Change” begins one youngster, providing a comic strip of penguins on melting icebergs. “People who like snow and winter will be sad because real winters will become rare. Think of a world without winter snow and penguins” and so on in ignorant babble.

But if you think the artist’s poo soap is gross, imagine a Japanese scientist reformulating  human poo from Tokyo sewers into edible steak. A two minute video of Dr Mitsuyuki Ikeda  doing the exercise at Okayama Laboratory caught  the media’s attention a decade ago, getting headlines in The Guardian, the Daily Mail, LA Weekly and incidentally, in world-leading sceptic blog wattsupwiththat and another blog the other day which I shrink from naming.

Mitsuyuki in white lab coat explains with microscope and blackboard diagrams how he  extracts proteins from the poo, turns it red using food coloring and injects a boost of flavor with soy. The equipment includes an exploder and enhancer. The resulting meat is 63 per cent protein, 25 per cent carbs, 3 per cent lipids and 9 per cent minerals. The whole exercise jibes well with the United Nations’ climate maniacs’ fatwa against steak-eaters.

The media all relied on the YouTube and nobody got around to interviewing or even googling Mitsuyuki. The YouTube clip had oddities like a fridge label reading (in English), “SHIT BURGER” and outdoor signage in Chinese rather than  Japanese.

In other words it was a hoax.

Strangely, a Mitsuyuki Ikeda did exist, worked for UNESCO and looks like the lab-coated gent in the video. The UNESCO guy never responded to queries and there’s a suspicion  he did the prank video in his student days in the 1990s. Even more strangely, his name Mitsuyuki Ikeda can be rendered in English as Meat So Yukky I Kid Ya. So make sense of all that. Another media (and sceptic) fail.

[1] There is no evidence for this statement. One IPCC report even said global warming could either increase or reduce weather extremes.

[2]  Schmidt:  “So I will be honest. Donald Trump is a different type of risk, but one that I think even transcends nuclear war and climate change as being a higher, more immediate threat. And because he will lead to many, many problems, nuclear war being one of them. As I said, I see him as the potential to destroy US democracy as we know it.”  In the light of the attempted CIA/FBI coup against Trump, Schmidt’s fulminations are ironic.

[5] Wikipedia: “In June 2018, Read triggered a BBC policy shift by publicly refusing to debate a climate change denier.[7] This lead to new policy that meant the BBC would no longer present climate change deniers‘ views as a counterbalance to scientific standpoints.[8]

When are we going to wake up?