Lunacy as the New Orthodoxy 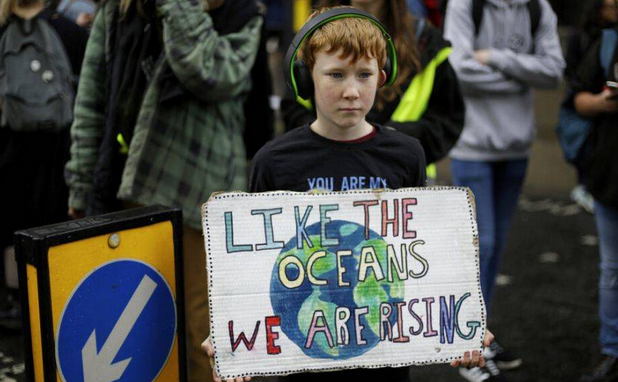 I recall listening to the late Professor Bob Carter a number of years ago saying that he thought the tide was turning. Effectively, that the climate scam was in process of being undone. Far from it in Australia; very far from it in the UK.

One of the things I notice in England, at least among the media and political class, is that all debate about the reality of man-made climate change is kaput. It’s yesterday’s debate. Whereas in Australia believers still think they have a job to do to convince those remaining pesky sceptics, here the job is done.

Sure alarmists like David Attenborough keep on trying to scare people into doing more about it but the “it” itself — upcoming, man-driven, climate catastrophe — is part of the furniture. This is why commentator after commentator is at pains to ensure, when criticising the disruptive activities of the latest eco hysterics, Extinction Rebellion (XR), that the audience knows they are terribly sympathetic to the cause.

XR is a well organised predominantly white middle-class movement; causing havoc in London by blocking roads and bridges. Its repertoire included parking a pink boat in the middle of Oxford Circus. Nick Ferrari of the Sunday Express calls it a “middle-class temper tantrum.” Lots of people are annoyed by its tactics; however, significantly, no one seems to doubt the justice of its cause.

London’s Mayor Sadiq Kahn is sympathetic. For this he came under fire from the police who have to deal with people playing dead on the streets. But Kahn is in crowded company.

Boris Johnson, while lambasting the activities of XR, said this: “They are right to sound the alarm about all manner of man-made pollution, including CO2.” Here is Bryony Gordon in The Daily Telegraph writing about XR: “…if they want more people to be sympathetic to their entirely noble cause…” David Rose, in the Sunday version of the same paper, sensibly buckets Attenborough’s tendentious and fiction-strewn documentary Climate Change: The Facts – featuring sixteen-year-old climate pin-up girl Greta Thunberg. Yet he notes, “Let me be clear: I am not a ‘denier’. Global warming and climate change are real, in large measure caused by humans.”

I saw one of the lady activists and a government minster, Lord Something-or-other, being interviewed on the BBC. His Lordship had obviously not failed to have his oestrogen injection that morning. Here was genuflection personified; a man whose demeanour towards the obdurate activist was positively fawning. He could not possibly have agreed more with her alarm about the peril that we are facing; while abjectly pleading his case that the government was taking action.

Get the picture? Well, the real picture is worse. Critical reasoning faculties have disappeared. Akin to Australia’s position, the UK’s emissions are a tiny fraction of global emissions: about one percent. So, as per Australia, nothing the UK can do will matter.

Apparently we (the world) have only twelve years to take the necessary action. Correction, Attenborough says that we have only ten years or we face “irreversible changes to the natural world and the collapse of societies.” But, unaccountably, he says there’s hope. How so, with China and India spewing out increasing amounts of CO2? Only dolts believe in man-made runaway warming and yet can’t see how utterly hopeless is the situation. We have dolts blocking London streets and others applauding their cause.

Attenborough accompanied by XR protestors need to get themselves on a wind-powered sailboat to China. Once there Attenborough needs to preach climate Armageddon while the protestors create mayhem in the streets of Beijing. It might work? Personally, I would be prepared to make a small donation to help cover the expenses of their trip.

Critical reasoning hasn’t entirely disappeared. There are letter writers to brighten the gloom. Here’s one from Peter Sharp of Essex that I liked:

An Extinction Rebellion protester said on television that she would not have children until climate change is fully dealt with. This is a commitment that all of these activists could usefully embrace, as an alternative to disrupting the lives and livelihoods of ordinary people. Benefits would be gained on a number of levels.

A final reflection on climate madness: I saw a report that cow breeding was being investigated to try to produce cows which belched less methane. Belch, by the way, is what cows do; very little in comparison comes out the other end. So the rude word is thankfully rendered redundant. I have an agricultural scientist friend to thank for this insight into the bodily function of bovines. However that is not to my point.

Trying to breed a stock of low-belching cows to replace the current dyspeptic lot will take forever, I would think. And, if XR and Attenborough et al are right, we simply don’t have the time. Mass worldwide slaughter and veganism is the answer and we better get on with it.

12 thoughts on “Lunacy as the New Orthodoxy”

For Those Who Would Be King