In mid-September I snorkelled on the Great Barrier Reef, as I have done many times before.  The first site was at Low Isles, a coral cay about 15km off Port Douglas.  I was snorkelling off the beach in shallow water.  Immediately on entering the water I was shocked at how cold it was.  Within about twenty minutes I was shivering and my thumbs were beginning to turn numb.

I have snorkelled at this sit a number of times before and it has always been warm, at times almost uncomfortably so.  Two days later I snorkelled on the outer reef at the Agincourt Reef.  Same story.  I put on a wetsuit but that provided little relief from the cold.  Shivering and numb thumbs within about twenty minutes. I was told by the boat crew that the water temperature was 24C and, indeed, a later check with the BoM website confirmed this.

Now I have been scuba diving and snorkelling for 45 years, up and down the East coast of Australia.  I am normally comfortable to dive, in a wetsuit, at 18C.  Admittedly, I am now 69 and feel the cold more than I used to, but I am quite comfortable walking around my home town at 20C in a T shirt and shorts.  There is no way that water on the GBR was 24C.

Here is a chart, from the BoM, showing the SST in the Coral Sea a few days ago: 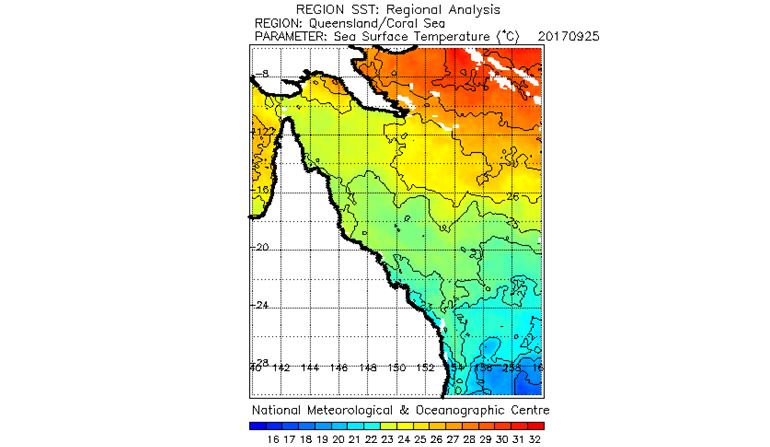 You will see immediately that there is a mismatch between the colour legend and the isotherms shown on the chart.  The area bounded by the 24C and 25C isotherms should be a bright yellow.  That may or may not have any significance but it got me wondering how these chart are derived.

Obviously the raw data comes from satellites, but how does the BoM derive such linearly complex isothermic boundaries?  What homogenization is carried out?  How is averaging done – presumably by some form of grid square?  Shown is a very large swathe of ocean that purports to be 24C and others at 25C and 26C.  That is a gross granularity, yet the BoM can produce a Sea Surface Temperature anomaly graph for the Coral Sea that shows granularity of less than 0.1C.  Moreover, they could do this over a time period well before satellite measurements, a time when sea surface temperatures were routinely measured by taking buckets of water from the ocean.

This graph is highly alarmist in that it purports to show a dramatic warming in the Coral Sea but it contains no caveats e.g. pointing out that the data collection methodology has changed dramatically over the period shown and that data for the earlier period is questionable to say the least.  Nor does it show uncertainty.

I’m not sure where I’m going with this other than to suggest that, like much of the BoM’s climate related product, published sea surface temperature records are likely to be very dodgy.  Are they, for example, arbitrarily adjusting inconveniently low temperatures upwards as they did at Goulburn and Thredbo? It is an unsettling thing to conclude that a government agency, nominally pledged to provide taxpayers with impartial and strictly clinical data, can no longer be trusted.

I accept that the Coral Sea has undergone recent warming.  I did observe the effects of significant coral bleaching at Low Isles since my last visit there in 2013, but then, if there were to be bleaching, Low Isles is a most likely site. I also accept that my observation is subjective and anecdotal, not empirical.  Nonetheless I am convinced that the recorded sea surface temperature for the Coral Sea in September 2017 is highly suspect, which makes me wonder how much more of the temporal and spatial record is similarly affected.

In an alternative universe where the BoM had an untarnished reputation for rigorous and transparent stewardship of climate data, I might think nothing of this. However, we all know that the BoM has responded to regular exposes of dodgy practices in processing the land temperature data by closing ranks and, protected by spineless ministers, has hidden behind supposedly independent reviews, none of which have included on their panels the likes of Jennifer Marohasy, who identified the problems in the first place.