The King Canutes of Climate Science

When climate scientists have a choice to peddle facts or forecasts, they go for forecasts every time. Especially on sea level rises. Let  me explain. Tim Flannery’s Climate Council, ruminating last year on supposed CO2-caused sea rise, was keen to crank up the scariness. So it included a couple of art photos in its report “Counting the Costs” on our allegedly fast-rising oceans.

One pic shows a frolicking humpback whale, with the remains of a dual lane highway visible below the waves. The other photo shows an old coot (about my vintage) slumped in his lounge chair, which is floating in the sea. Alongside  bobs an empty chair, with a dinghy is anchored nearby. I think the elderly gentleman must have loaded the armchairs and his vintage wife onto the dinghy to escape the sea pouring through his front door, but the wife fell overboard and that’s why he looks so sad.[i]

The Council report was lead-authored by Canberra’s Will Steffen, my second-favorite catastrophist (I’m loyal to Melbourne’s David Karoly, who seems to think the Hazelwood power station could be charged with murder).[ii] Meanwhile, it’s all so exciting!  “Coastal flooding is the sleeping giant,” Steffen says, not once but three times. “Globally, one estimate puts these costs at $US 1 trillion by 2050, while others estimate that costs could rise to over 9% of global GDP annually. This is a scenario for economic collapse.” 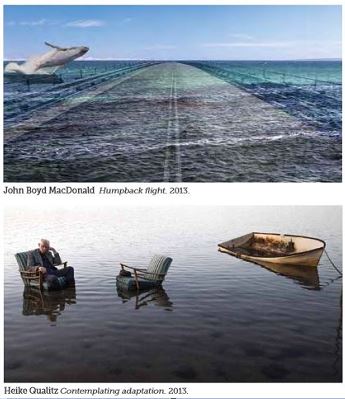 If you’re interested, the 9% of GDP figure equals about $US7.5 trillion per year, five times Australia’s current output.

The report ramps up to “peak scary” by creating a multiplying factor of 10,000-plus, for the combined impacts of sea rise and extreme weather. I’m not making this up, it  says,

“Table 2 shows the multiplying factors and impacts for Australian cities in 2100 based on the BAU  [Business As Usual emissions]  pathway. This shows that Sydney, Bundaberg and Hobart would experience today’s 1-in-100-year flooding event every day or so by the end of this century. Even  in Adelaide (the least vulnerable city shown in Table 2), today’s 1-in-100-year flooding event would occur every year or so by 2100.”  (P6. My emphasis)

I’m not a fan of Adelaide anyway, but when I book Virgin for  Sydney in 2100, remind me to take a  raincoat.

The Council and CSIRO’s prescription for saving the planet would be more plausible if they could master simple arithmetic. The report, as finalized, says 0.2% to 4.6% of the global population at 2100 will be flooded annually, equal to 1.4m-32.2m people (P42).

Well who’d have thought  that the global  population in 2100  would be only 700 million?  In this Climate Council report titled “Counting the Costs”, it would help if the authors and reviewers[iv] could count.

The study also bigs up the sea-rise peril from the claimed melting Greenland and Antarctic ice sheets:

All well and good, “settled science” etc., blah blah blah, except that last month a study by the US National Aeronautics & Space Administration (NASA) found that the Antarctic as a whole was gaining, not losing, mass.[v] NASA announced,

The research challenges the conclusions of other studies, including the Intergovernmental Panel on Climate Change’s (IPCC) 2013 report, which says that Antarctica is overall losing land ice.

“The implications of this study devastate climate alarmism:

Anyway, I stumbled the other day  across a user-friendly website for actual sea-level data (no forecasting or homogenising involved). It’s not one of those sceptic sites, like joannenova.com.au, but from NOAA,  America’s  National Oceanic & Atmospheric Administration. NOAA tracks sea-level movements around the globe via tide gauges.

Try starting with the NOAA sea data for Sydney (Fort Denison) and Fremantle.

The Sydney data go all the way back to 1886. The reference point is a plug in the northern wall of the Department of Lands Building in Bridge Street. There are other plugs in the stone wall on Fort Denison and Mrs Macquarie’s Point.

So tiny? Some mistake, surely! Let’s check the Sydney numbers against those for Fremantle, 4000km to the west. In this case, the reference point is a little brass plate set in concrete below a cover plate at the inshore corner of ‘A berth’ landing. From 1897 to 2010, the average annual rise at Fremantle was 1.54mm, or 15.4cm  or a mere 6 inches per century.

So head north to Bundaberg and Townsville, and all you get is 5.8cm and 14.8cm per century, respectively,  a few inches and half a foot. Criss-cross to t’other side, Port Hedland (21.8cm/century) and Carnarvon (28.9cm/century). That’s a bit higher, but we’re still only talking of barely a foot in 100 years.

Over to NZ then, let’s spread our sample.  Same boring story, 12-23cm per century. So head  for those drowning Pacific isles, Tuvalu and Kiribati. Tuvalu gets an average annual rise (since 1977) of 3.74mm or 37cm a century: 15 inches. This rate  could become  a problem in 30-50 years if the islanders maintain their high  birth rate and continue degrading their environment. Even so, the island chain’s surface area is growing, not drowning.[vi]

But here’s Kiribati: a mere 6cm per century, a few inches. Then there’s the Cook Islands (15cm per century or half a foot), Palau just a tad higher, and the Marshall Islands, higher again at 36cm, or 14in.. But those statue-building descendants on Easter Island can relax: their vast Pacific Ocean surrounds are rising at a mere 3.3cm per century, or  not quite  2 inches in a 100 years.

Numbers like this spoil the narrative of our coastal-catastrophes-to-come. The Steffen crowd at the Council are satisfied with nothing less than a 1.1 metre sea rise by 2100, and devote a whole page of diagrams to what 1.1 metres will do to poor Australia. “Close to 250,000 homes at risk!” says one of Steffen’s excited labels. And kiss goodbye to 120 ports, 5 power stations, 75 hospitals,  44 sewage plants etc etc.

Tide gauges? Steffen recoils at the idea that the past century’s actual sea rises in our region are a reasonable guide to 21st century sea rise. The non-alarming  tide-gauge data haven’t been “adjusted”, he says, to allow for El Ninos, ice sheet behaviours (rightly or wrongly measured), atmospheric pressure, and all the other wonderful stuff that only climate scientists know how to do (Just trust them, OK?). When they do perform their  “adjusting”,  behold! The Australian tide-gauge readings rise up to meet the purported global averages.[vii]

The most useful estimates of future sea-level rise (i.e. the rise several decades or more hence) come from climate projections provided by computer models rather than from simple extrapolation of recent observations.  P9. [My emphasis].

There ares some caveats about the models that go unmentioned in Steffen’s report.  There’s been no global warming for 18 years and 9 months; the IPCC acknowledges that 111 of its 114 model runs have been running too hot[viii]; and with every year this century the gap between the models’ hot forecasts and actual global temperatures has widened. The long warming halt may be followed by more warming, or a new phase of ocean or quiet-sun-driven cooling. No one knows. Whatever, the IPCC climate forecasts for 2100 have already been done-in by climate realities.

But wait, what about the looming year 2450? Even under a conservative CO2 emissions scenario, Steffen foresees a 2m sea rise by 2450. He probably has a scientific sea-level ‘clock’ on his bedside table. Twist the CO2 knob and it shows the global temperature rise. This rise rotates a third cogwheel that shows global sea level rise for however many centuries ahead you like. QED, quite easily done, as my maths teacher used to say. Pass the Nobel Prize.

The  Council forecasts of 1 metre-plus sea rise were always just  computer doodling, but with real-world implications. Several Australian States have written the    circa 1m rise by 2100  into planning codes, as many home buyers, builders and renovators have painfully discovered. Should there be anyone beset by uncertainty at such long-range prophecies, Steffen whistles up psychologist  Stefan Lewandowsky, who earned a tinfoil hat for his mind-reading study while at UWA two years ago: “NASA faked the moon landing—Therefore (Climate) Science is a Hoax.” Lewandowsky’s  publisher, Frontiers, chose to formally retract his follow-up 2014 paper, “Recursive fury: Conspiracist ideation”,  citing legal  grounds.[ix]

We conclude that any appeal to uncertainty compels a stronger, rather than weaker, concern about unabated warming than in the absence of uncertainty.

That zinger could be parsed as “The more dubious that  climate science gets, the more we should spend trillions on it, starting at Paris next month.” #

Tony Thomas blogs at No BS Here, I Hope

[i]   Photographer Heike Qualitz, in her own arty  annotation, writes: “In our fast moving contemporary society it is not surprising the subtle shifts beyond our own front doors go by unnoticed – perhaps until they no longer can be ignored…Adaptation implies the need to accommodate an inevitable and impending change, but it also indicates resilience, a quality of our species that is steeped in hope. However, our deep interconnection with the trillions of life forms we breathe in and around raises questions. Will they too be able to join us on the journey of adaptation?” Will they indeed?

[ii] The other two authors were John Hunter and Lesley Hughes, congrats to both.

iii]  “We thank CSIRO for reviewing the accuracy and relevance of the science underpinning the report.” (Preface).

[v] Not to mention that Antarctic sea ice is at record levels for the satellite era http://www.abc.net.au/news/2015-05-12/antarctic-sea-ice-record-coverage-causes-problems-for-supply/6464178

[vi] “23 of 27 atoll islands across Kiribati, Tuvalu and the Federated States of Micronesia either ­increased in area or remained stable over recent decades”. http://pacificpolicy.org/2015/05/so-far-most-atolls-winning-the-sea-level-rise-battle/

This would be well under a foot per century, but isn’t adjusted for land movements.

[ix]  Frontiers said, “ Specifically, the article categorizes the behaviour of identifiable individuals within the context of psychopathological characteristics.”

7 thoughts on “The King Canutes of Climate Science”

Turnbull Will Always Have Paris

MEMO: To the Minister for warmism and paranoia