The University of Western Australia’s magnificent Winthrop Hall is dedicated to Socrates. Now there was a courageous chap. He knew the difference between aurum philosophicum and aurum vulgi – between genuine and pseudo-knowledge – and was prepared to say so. This is clearly a skill in short supply on campus, judging by the extraordinary events of last week surrounding the dismissal of Bjorn Lomborg before he had even reported for work.

Victor Wager’s 1932 al fresco statue of the philosopher (above) on the north side of the hall bears the inscription that he “sought truth always by the path of open discussion and free enquiry. May his spirit preside here at all times.”  Fat chance of that path remaining open after the inferno of intolerance that last week saw the banishment of the Danish climate “contrarian”.

“I’m struggling to understand why anyone would say they do not want to see a centre [his proposed Consensus Centre in the UWA Business School] that involves some of the world’s top economists and several Nobel laureates,” Lomborg reportedly said.

In 399BCE, Socrates was forced to drink hemlock for the crime of impiety. He was executed for, inter alia, “failing to acknowledge the gods that the city acknowledges”. While such an offence no longer exists, any lack of politically-correct respect for something considered sacred in the Academy (or government) – such as failing to prostrate oneself before the new gods (and goddesses) of climate catastrophism and environmentalism — can land one in very hot water indeed. Lomberg and a stunned public discovered asmuch last Friday.

In 2015, the UWA Vice-Chancellor Paul Johnson was forced to eat humble pie, despite having considered it “appropriate for Doctor Lomborg to be associated with UWA.”

“I understand there are strong views on this issue. However, I believe that a man who has worked with many Nobel Laureate economists, has been named one of Time magazine’s most influential people, and has published with Cambridge University Press meets the criteria of being made an Adjunct Professor – an honorary position that carries no salary.”

“Despite all this, there remains strong opposition to the Centre. Whilst I respect the right of staff to express their views on this matter, as all universities should be places for open and honest sharing and discussion of ideas, in this case, it has placed the University in a difficult position.”

Yet by acquiescing to the ‘anti-climate science’ and ‘Lomborg’s views are dangerous’ rhetoric of a bunch of self-appointed thought olice defending their antipodean version of ‘academic integrity’, the UWA Senate has allowed them to trash (again) its growing reputation as an international Centre of Excellence while – ironically – claiming their actions ‘protect’ it.

The Senate presumably would argue it had no choice, given the lack of ‘co-operation of a wide range of people across many fields’ that emerged within the university. Some external observers, however, have another perspective.

Strange to relate, just before the frenzied crowd began dancing on the ashes of Doctor Lomborg’s proposed Consensus Centre, a ghostly emanation turned up uninvited, breast bared and finger raised, all the better to wipe the taste of bitter hemlock from those spectral lips. Facing down an incensed UWA Student Guild, assorted ideologues, petitioners, et cetera, they would have burnt at the stake the legendary visitor and any other ‘climate contrarian they could lay their alarmist hands on if such antics were not prohibited by UWA by-laws regulating usage of inflammable materials on campus. Socrates ghost, appearing ex nihilo in the Sunken Garden, made an eloquent, unprecedented and unnoticed apology to the University. In medialand, folk were too preoccupied by the university’s back-flip and Friday night footy to notice anything supernatural before the bars closed.

The Greek contrarian started off with a sigh tinged with amusement, as if to say what silly children we can be. The remainder of his address is reproduced below 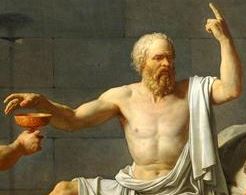 “Friends of truth, you have requested that my spirit preside here at all times,” he began. “You have honoured me – and my method– in the past, so it is right and proper that I should return from time to time. After all, was I not the inspiration for your “seek wisdom” motto?”

“Do the residents of this hallowed place still have their ducks in a row? Or are they intent instead on scoring a row of ducks – such as the Lewandowsky affair and ostracism (ostrakismos) of Doctor Lomborg?

“I do not know what effect Doctor Lomborg’s accusers have had on you, but for my own part I was almost carried away by them – their arguments were so convincing. On the other hand, scarcely a word of what they said was true.

“But what you shall hear from me will be a straightforward speech in the first words that occur to me, confident as I am in the justice of his cause. It would hardly be suitable for a man of my age to address you in the artificial language of a schoolboy orator or climate-change sophist.

“In my opinion, Doctor Lomborg’s opponents are thoroughly selfish bullies. They have brought this action against him, – not because of a genuine commitment to the pursuit of truth in the manner I described two thousand four hundred and fourteen years ago, but out of sheer wanton aggressiveness and inflated self-assertion.

“What I told my executioners then I repeat this evening, for it applies also in this nasty case.

“I told them that as soon as I am dead – and as soon as news of Doctor Lomborg’s expulsion is in the public domain — vengeance shall fall upon you with a punishment far more painful than your killing of me. You have brought about my death in the belief that through it you will be delivered from submitting your conduct to criticism, but I say the result will be just the opposite. You will have more critics, that the result will be just the opposite.

“Here is the truth of the matter. The best and easiest way is not to stop the mouths of others, but to make yourselves as good as you can. This was my last message to those who voted for my condemnation, but it is unlikely to be the last to those involved in Doctor Lomborg’s expulsion from this place.”

Disclosure Statement: A graduate of the University of Western Australia and two other universities, the author does not work for, consult to, own shares in or receive funding from any company or organisation that would benefit from this article. His work includes No Room at Nature’s Mighty Feast – Reflections on the Growth of Humankind, The Aztec solution to climate change and The Devil’s Dictionary of Climate Change.

Climate Science: Have Stats, Will Doctor