Of all the evils which the Environmentalists have foisted on the world, there seems little doubt that the campaign to replace petrol and diesel with “bio-fuels”, eg ethanol, made from cereal crops such as maize and wheat, or from sugar made from cane and beet, tops the list.

The transfer of arable land from food crops to ethanol crops in the US tripled food prices in Mexico a few years ago and nearly brought down the government. The corn (maize) which is the major cereal crop in the Mid-West was sold for ethanol production instead of exporting to Mexico and other developing countries in South America.

Food is a very large component of the budget of a person who lives in a poor country. In Australia increases in food prices have little budgetary impact on most Australians.

The political upheavals in Egypt now spreading to the rest of the Arab world have enabled some commentators to make the point that the recent threefold increase in the price of food, particularly grains such as maize and wheat, have been a significant factor in generating massive discontents throughout the Middle East.

Here is a summary of the global situation from Matt Ridley’s The Rational Optimist (p 240) published last year.

Together with drought in Australia and more meat eating in China, this was the key factor in that helped push word food supply below food demand in 2008 and cause food riots all over the world. Between 2004 and 2007 the world maize harvest increased by 51 million tonnes, but 50 million tonnes went into ethanol, leaving nothing to meet the increase of demand for all other uses of thirty-three million tonnes: hence the price rose.

Although the ethanol scam has been most pronounced in the US, we in Australia have a problem which has received little attention from the media. It all began when the Howard Government agreed to subsidize ethanol production for automobile use (as an additive to petrol).

John Howard was always susceptible to the pleas of rent-seekers, and the renewable energy scam, which he legitimised in 1997, has cost Australians close to a billion dollars annually and is now threatening us with the collapse of the electricity supply industry. This was his most grievous folly. But the ethanol scam which now costs Australians nearly M $200 annually, also threatens to grow into something much worse.

The successful rent-seeker was Dick Honan, “Mr Ethanol”. His company is Manildra. Howard swallowed the ethanol scam, hook, line and sinker, and pushed the scheme through the cabinet against the vehement opposition of both the Treasurer (Peter Costello) and the Finance Minister (Nick Minchin).

Howard’s support for Dick Honan and his brand of snake oil developed from the late 90s on. It was strongly supported by Joanna Gash, MP for Gilmore (on the NSW South Coast) in whose electorate Manildra’s plant is located. The National Party, especially those representing the sugar seats in Queensland, saw ethanol as the saviour of the sugar industry, and were influential in getting the scam accepted by Cabinet.

The Green rationale for ethanol is that it reduces emissions of carbon dioxide from fossil fuels and thus contributes to saving the planet from rising temperatures. But it takes approximately 1.3 litres of diesel to produce 1 litre of ethanol, so we have more anthropogenic CO2 in the atmosphere than would otherwise be the case. Nevertheless, the rents keep flowing to the successful rent-seekers, and they in turn keep up the supply of funds to the political parties (today the ALP) to ensure the continuing grace and favour of the government.

The extent of the favours and subsidies which have helped to make Dick Honan a rich man, began with capital grants (nearly $100 M), and freedom from the excise on petrol (38 cents/litre). For an annual production of 85 Million litres (2006-7) this came to M$32 p.a. Petrol distributors had to incur capital costs of installing extra tanks through the distribution chain, but I have never seen any estimates of these costs.

This table shows that the subsidy has grown from M$32 four years ago to M$183 today: 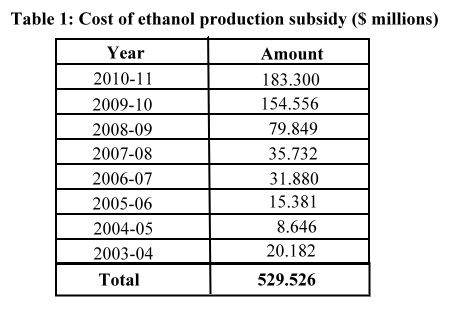 It was originally proposed that the excise free status which made ethanol competitive with petrol would be phased out, beginning this year. But the rates of excise to apply from now on to ethanol have just been published and because it will be very difficult for ethanol to survive on an excise of 12.5 cents (cf 38 cents for petrol) we can predict that by 2015 comes around that rate will be reduced.

There has been very little comment in the Australian media on this outrageous example of rent-seeking. In the US there is a major row under way and it is reasonable to predict that despite the clout which the corn and sugar states exercise in Washington, the impact of rising world food prices and the consequences to date will make their position difficult to sustain.

The ethanol scam is an outstanding example of the application of Green fantasy to the real world. And once it has been legislated into existence it is very difficult to undo the damage.

Ray Evans is Secretary of the Lavoisier Group