I am a climate sceptic. I admit it. Phew! Luckily for me I no longer regard myself as an economist otherwise, according to John Quiggin, I would be bereft of professional credibility. I just dabble these days.

John Quiggin: “To the best of my knowledge there is not a single economist in Australia with any professional credibility who denies the reality of global warming or the need for a global policy response.”

For the sake of the argument let us assume that Quiggin is right and that all economists of any professional credibility believe in man-made global warming. Is this of any significance? No, it isn’t. Some people believe in flying saucers because there have been so many sightings. Each new fanciful sighting reinforces their belief. Each economist believing in “man-made” global warming is like a flying saucer sighting. It should add nothing to our confidence in man-made global warming because economists bring nothing of value to the table on that particular subject. It has as much persuasive power as everyone at the local golf club believing in the eventual viability of cold fusion.

John Quiggin: “Economists have enough expertise with time series to distinguish a genuine upward trend from a random fluctuation.”

As I have said I don’t claim to be doing economics these days but I too can distinguish an upward trend if it hits me in the face. In this case, global temperatures, on the graphs that I have seen, have been trending upwards since the end of the little ice age. To imply that this, of itself, is evidence of man-made global warming, caused through the emission of carbon dioxide is, of course, amateurish at best and disingenuous at worst. The question that has to be asked is whether that trend is linear throughout, which would point to causes other than man-made ones, or whether recent movements have been significantly above trend, which might be circumstantial evidence of man’s complicity.

John Reid, the editor of Science Heresy, drew my attention to a recent paper (2009) by Syun-Ichi Akasofu, International Arctic Research Center at the University of Alaska: “Two Natural Components of the Recent Climate Change”. Akasofu who, right or wrong, probably knows a thing or two about climate that Quiggin and Garnaut and other credible economists don’t know, suggests that recent climate change (over the last 140 years or so) may be the result of two factors: the recovery from the little ice age and “multi-decadal oscillation”. I am not sure what the second of these factors means but that is beside the point. The point is the graphs of temperature that Akasofu provides which, to my eyes, are linear enough to challenge the view that something untoward has happened since the late 1970s. 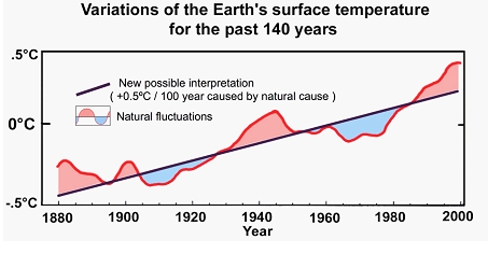 It looks to me that the upward movement between 1910 and 1945 could as easily have been interpreted as man-made global warming as the recent upward movement to 2000; just, in fact, as the decline post 1945 was viewed as the possible onset of global cooling.

Akasofu suggests that the levelling of temperatures since 2000 could be a sign that we are entering a multi-decadal downturn. Observations that temperatures appear to have stopped rising isn’t cherry picking data as Quiggin suggests. It is an attempt to put temperature changes into a broader historical context. The only cherry picking of note is the kind which takes data from the late 1970s out of that broader historical context.

If economists like Quiggin can spot a trend from random fluctuations, as he claims, then they ought to understand the dangers of reaching conclusions from only a subset of time series data. At the very least they need to explain that they have taken the broader data set into their calculations so that we will not form the view that they are out to do a snow job (if the warmists will pardon the expression) on us non-economists.