Apocalypse fatigue: Reduced interest in current or potential environmental problems due to frequent dire warnings about those problems.

A new pandemic is sweeping the planet. A rogue form of climatitis, it is more virulent than Trundle-Mann’s dyscalculia, Pitfall’s paradigmnesia, Robyn’s rancoria, Steffenowsky’s thermomania, Flannery’s fever and the delirium typical of advanced cases of Gaia nervosa. Medical experts have a name for it: apocalypse fatigue syndrome, AFS.

Climate alarmists fear AFS more than their direst predictions, with good reason. There is no effective cure. Concoctions of Chinese herbs have been tried in some countries, but with ambiguous results and high patient mortality.

In the West, universities, royal societies, centres of excellence and departments of climate change are desperately seeking an AFS antidote. It is a challenging task, according to those familiar with their work.

With input from media gurus, social psychologists and armchair alarmists, they are hoping to reverse public indifference. Launching a new (Mark II) series of disturbing eco-images and videos – “mind bombs” – apparently is one plan.

MBs strive to transform complex issues into powerful emotional images. The most effective create irrational fear about the future, anxieties about retribution by Nature (Gaia), and quasi-religious feelings of guilt and redemption.

Mark I MBs were Al Gore’s convenient polar bears “stranded” on an ice flow and destructive hurricanes; media images of “greenhouse gases” (predominantly steam) belching out of “dirty” coal-fired power stations; and at least one government’s Yes Minister attempt to mislead by branding carbon dioxide as a black and sooty carbon “pollutant”.

One strategy is to link the Earth’s fate explicitly with that of the young. Innocent and vulnerable children (with an obligatory cuddly toy) were big stars of the MB I series.

The opening film at the United Nations 2009 COP-15 Copenhagen Climate Conference is a classic in the genre. A concerned young girl clutches a white (polar) teddy bear. She goes on a nightmarish journey through a world of eco-mayhem and environmental catastrophe, including an (apparently climate-induced) earthquake. The climax comes when she asks viewers to “please help the world”.

Background voices warn of “hundreds of millions of climate refugees” and chastise those who “still doubt the human influence on this predicted catastrophe.” The 4 minute 14 second MB ends with what some psycho-analysts would describe as an infantile fantasy: “We have the power to save the world. Now.” 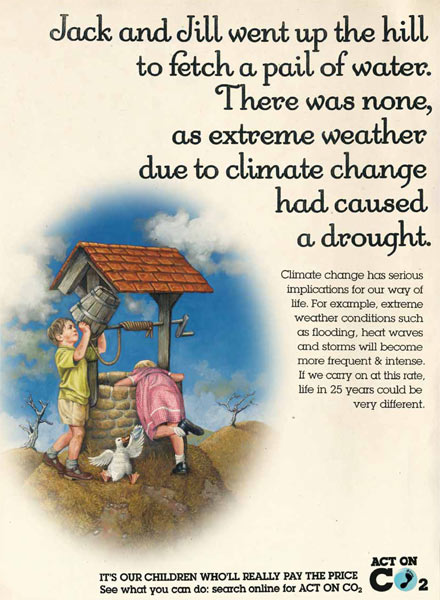 Other examples appeared in a $10 million media campaign by the UK Department of Energy and Climate Change in late 2009. It comprised a TV ad, four press ads and two billboard posters. About 1,000 complaints were made to the Advertising Standards Authority and communications regulator, Ofcom, denouncing most of it as misleading, scaremongering and distressing. Many argued the TV ad broke broadcast bans on political advertising.

The ASA later ruled two of DECC’s – It’s our children who’ll really pay the price -press ads, which used nursery rhymes to push climate change alarmism, were in breach of the advertising code. The language used to indicate how storms, flooding and heat-waves would increase “should have been phrased more tentatively”. Yet images of UK flooding and a drought were declared “not in themselves … exaggerated or misleading”.

The DECC 1 minute 10 second TV ad, surprisingly, was allowed to run. In it, a little girl grows more and more fearful as her dad reads a bedtime story about climate horrors that could be inflicted on families (and household pets) by a scary carbon (not carbon dioxide) emitting monster.

The Australian government is keen on MBs too. It has spent over $15 million on ad campaigns designed to convince the public to share its alarmist ideology. Young adults were the target of its 2010 Shout Out for Climate Change project, presumably because focus group research suggested they were the most receptive demographic.

Bomb design is a dangerous business. A new MB can explode in your face. This is what happened to 10:10, a UK-based environmental group, last October.

Its video showed authority figures (teacher, CEO, soccer coach) literally blowing up anyone in their groups who expressed doubt about the logic of reducing carbon emissions. After a storm of public protest, 10:10 was forced to withdraw it.

Eugenie Harvey, 10:10’s UK director, later issued a public apology for the 3 minute 59 second implosion. “At 10:10 we’re all about trying new and creative ways of getting people to take action on climate change,” she wrote. “Unfortunately in this instance we missed the mark. Oh well, we live and learn.”

MBs can be words and phrases. Climate change is now a powerful MB. Almost a synonym for God, or at least His eco-archetype, Gaia, it is all powerful, present everywhere, and just as incomprehensible.

The “war on carbon” is a popular political MB. Is this kind of combat rhetoric effective? Britain’s first Green MP, Caroline Lucas, thinks so. She recently called for a revival of the country’s Second World War spirit to help it meet carbon emissions targets. “We need to mobilise as a nation in a way we haven’t seen since 1945″, she said. People then were willing to put up with so much deprivation “because they knew there was no alternative”.

Earth System Science is for some an MB prototype with promise. Others see it as further evidence of science’s infatuation with computer modelling. With echoes of The Limits to Growth, a 1972 report for The Club of Rome’s Project on the Predicament of Mankind, ESS recasts our “predicament” with climate change as the villain. Its promoters, like high priests of a future Ecotopia, intend to identify “behaviours incompatible with long term societal aspirations on this finite planet” and presumably try to correct them.

Concern about how to deal with AFS is spreading. US science teacher, Greg Craven, almost became a casualty of his own MB last December at an American Geophysical Union Fall Meeting. His speech was on why America was not listening (to climate alarmists) and what should be done about it:

You have done an abhorrent job at communicating climate change to the public so far. Because what you’ve been giving them up to now, as a scientist, is information. And with the terrifying divergence between public opinion and scientific opinion in the last few years, with public opinion in the U.S. plummeting over the last several years, that strategy clearly is not working. So it is time for a radical change in tactics”. [Applause.]

‘So what’s the key to better communication when you have already done the 3,000 page reports, the 50 page glossies, the televised adverts, posters in schools, coloring-in competitions, brochures, feature length documentaries, and interviews on every current affairs program in the Western World? The answer: scream louder.

But will a new wave of screaming Mark II MBs change the public mood or derail what Craven described (incorrectly) as a “ruthless denial machine”? It seems unlikely. The current situation is not due, as some claim, to “poor communication”. AFS is the inevitable outcome of strident folk pushing doom-and-gloom scenarios for too many years. The public has had enough. It has had enough of shouting out for climate change, of moralising lectures about carbon footprints, of convoluted mind games posing as genuine explanation, of dodgy projections masquerading as predictions, and contrived (or genuine) climate hysteria.

It is rightly more concerned about real and current (not distant) natural (not allegedly anthropogenic) disasters, like the recent floods in north-eastern Australia and record-breaking cold weather in the northern hemisphere. Emotion about future threats no longer works, except with – religious and climate – fundamentalists. So the proposed screaming Mark II MB will be obsolete soon too.

Meanwhile, international agencies seem to be pursuing more Orwellian tactics, under the guise of developing a “new scientific language” as part of the orthodoxy’s continuing attempt to alarm us. Hamburg’s Climate Service Center and the US National Research Council are setting up groups to “communicate climate data better.” The CSIRO is apparently proposing a “national research charter” to “better coordinate” communication of its perspective.

The IPCC also wants “a more careful language”. According to Spiegel Online’s Alex Bojanowski, it recently sent scientists a code of conduct on journalist interaction. They should avoid using words such as “risk” and “uncertainty” in interviews “to prevent misunderstandings – and to keep from doing the climate protection movement any further damage.”

This could be difficult. A recent critique of the IPCC’s evaluation of evidence and treatment of uncertainty by the InterAcademy Council noted (page 35, chapter 3) that “assigning probabilities to imprecise statements is not an appropriate way to characterize uncertainty. If the confidence scale is used in this way, conclusions will likely be stated so vaguely as to make them impossible to refute, and therefore statements of ‘very high confidence’ will have little substantive value.”

The public, as Ted Nordhaus & Michael Schellenberger noted in a 2009 article, “may not know climate science very well, but they are not going to be muscled into accepting apocalyptic visions about our planetary future – or embracing calls to radically transform “our way of life” – just because environmentalists or climate scientists tell them they must.”

The jury is still out, but recent polls suggest another alarmist blitz would be counter-productive. It would entrench the growing perception there is something very wrong with official climate change discourse. Oh well, as the 10:10 director said, “we live and (hopefully) learn.”

Michael Kile is the author of Alice’s Adventures in Warmerland. He is working on a self-help guide, Climate Change Semantics – Clever ways to impress your friends and confuse your enemies.