Muddle on the Murray

Murray-Darling Basin – Where to now?

Certainty, certainty all we want is certainty. That is the plea heard so often from those pressing to have a price on carbon that would supposedly lead to decisions to invest by energy producers but who are now facing the reality that the Gillard government won’t make a decision until end 2011 after the three committees of inquiry have reported.

And now irrigators who access the Murray-Darling Basin water supply needed to sustain their farms face a similar uncertainty about the reduction needed in water usage to protect the river system. During the election Water Minister Tony Burke assured us the Murray-Darling Basin Authority was independent and Prime Minister Gillard stated “we will implement the authority plan”.

The initial report (stated to be only a “guide”) is from an Authority whose board members were appointed by previous Climate Change Minister Wong in May last year, whose chief executive previously ran the South Australian department of water, land and biodiversity conservation and which has a staff of 300. The outrage from irrigators about the basis used for the proposed very extensive cut-backs meant any idea of accepting the Authority’s position quickly disappeared. Regional development minister Crean was immediately forced to save the day by indicating that “it was never going to be a decision for the authority … the government has to put out a plan and it will do that”.

The Authority itself also responded quickly by announcing it would produce a report on the economic and social effects (how could it have forgotten to do that?) and, equally quickly, the government asked independent Tony Windsor to head an inquiry to check the human costs. Windsor’s initial comment was that he did not expect a resolution to the process in this electoral term, ending in 2013.

So now we have a return to the Rudd government’s predilection for reviews and consequent increased uncertainties for private sector investors and businesses and farmers generally. The Prime Minister will need to reconcile this with her recent speech about the need to press ahead with economic reforms.

But what about the basis on which the water cut-backs are proposed for irrigators? Here is where a fundamental problem arises.

According to its web site, the Authority is an integral element of the federal government program Water for the Future which has four priorities – “tackling climate change, supporting healthy rivers, using water wisely and securing our water supplies”. No direct mention here of farmers or food supplies and, as former Productivity Commissioner Judith Sloan has pointed out, “when it comes to guiding the determination of sustainable diversion limits (SDLs), the environment has primacy, with residual flows available to other users” and “the SDLs over-allocate water to the environment and under-allocate water to irrigators”.

This suggests a strong case exists for reviewing (Yes, another review!) the basis on which the Authority operates. There is no scientific basis for giving priority to the environment in water withdrawals: history shows that the Basin has been subject to severer periods of drought than in the recent past.

Importantly also, there is a need to re-assess the possible effects of climate change. Hitherto the perceived wisdom has been that as temperatures rise there will be a reduction in rainfall. Analysis of annual rainfall data in the Basin since 1900 shows a dominant random behaviour of rainfall with a slight (statistically insignificant) increase in annual rainfall but certainly no significant fall while the temperature increased in the twentieth century. What does emerge, however, is a definite seasonal relationship showing the hotter summer months (November-February) produced statistically significant increases in rainfall with no significant change for the rest of the year. In short such evidence as is available suggests that as it gets warmer it also gets wetter.

This suggests that the SDLs should be set on the basis that, accepting possible future increase in temperatures suggested in Intergovernmental Panel on Climate Change reports, this would be very likely to result in higher rainfall. Moreover, as the graph shows, the trend in rainfall in 2010 suggests there is reason to be optimistic about the immediate future. 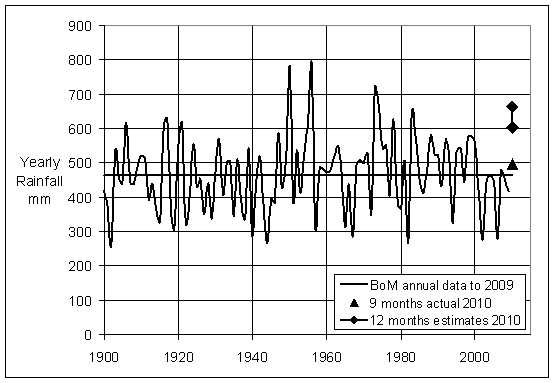 Des Moore is Director, Institute for Private Enterprise. Tom Quirk is a physicist

Scandal between the covers

The fine art of scaring children