Shelley Gare’s Quadrant essay “Death by Silence in the Writers’ Combat Zone” and her online audio conversation with Keith Windschuttle told me that the Totschweigentaktik, this same “tactic” – to use the English word – is as used by other groups wishing to push a particular agenda.

When first seeing the word and having studied German at school many years ago, I reached for my German-English dictionary to find its origins.

Although the translation of the verb “totschweigen” is given as “to be silent, to hush up,” and hence to “ignore,” it describes, as in the literary world, the tactics used to prevent the person targeted from expressing his or her opinion and to kill their book and reputation.

This immediately took my line of thinking to the methods used by the alarmist Anthropogenic Global Warming (AWG) people to prevent those who reach different conclusions – often called Sceptics – having any say in the matter or having their work published. The Climategate files revealed how they operated and the methods used, confirming the suspicions of many who came into conflict with them. Again showing up the closed minds of many who try to gain political control at many levels.

In her article, Shelley Gare make reference to “a famous maxim which is sometimes attributed to the American philosopher William James, and I’ve also seen a version attributed to Mahatma Gandhi. It describes how unwelcome ideas, and their proponents, are treated: ‘First they ignore you; then they mock you; then they attack you viciously. Finally they say, oh we knew that all along.’" 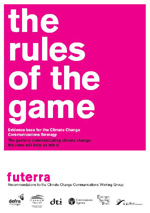 On its last page is this quotation from Mahatma Gandhi:

With a slightly different twist at the end, those wishing to change society’s thinking about or attitude to some challenge or perceived problem are using this plan of action. Other publications from the same source can be found here.

Over a period of two decades this controlling group of climate scientists sought to and manipulated the publication of scientific papers in certain journals, extending this technique to the peer review process of papers submitted for publication and to the reviews in journals of books about climate, climate change and similar topics. Some such reviewers just claimed that the approach in the paper or book to the subject or hypothesis was wrong, “full stop,” without giving a valid reason or recommended rejection for quite minor reasons. Another part of their game plan is to accuse climate sceptics of putting out “misinformation,” without explanation.

So instead of embracing this diversity of knowledge of the independent climate researchers, thanking them for their experience – no-one knows everything about everything – and using that knowledge to improve their own understanding, their calculations and their models, these power-brokers of climate science instead ignore, fob off, ridicule, threaten, and ultimately black-ball those who dare to question the logic and methods that they used.  Do not be confused: I am here including those scientists within their own establishments, not just the independent “sceptics” whom they dismiss out of hand.

During the early years of the Internet, communication was mainly between members of academic establishments. Towards the end of the 1990s, computer and internet system speeds increased, usage opened up to individual and commercial users. Around the turn of the century a number of the independent individuals and groups began to question the pronouncements of the IPCC and the internet allowed rapid discussion and examination of the alarmist AWG theories. By the middle of this decade climate change alarmism became political and is still difficult to counter with many of the scientific world unable or unwilling to exam the physical basis of climate change and its history as told in the geological record.

Strangely several attempts at debates with the AWG protagonists have evaporated, the proponents having run away from a fight. Thanks to the Internet and digital publishing, a large volume of literature, books and scientific papers are now exposing the deceits of the “official” story.