The 4th Heartland International Conference on Climate Change was held between May 16-18 last week in the Heartland Institute’s home city of Chicago. Previous meetings have been held in New York and Washington, and all have been highly successful. But as conference participant and Euro-MP Roger Helmer pointed out, the Heartland-4 conference marks a turning point, because of the emergence at the meeting of a rapidly maturing counter-consensus on the still topical (if increasingly tiresome to voters) issue of alarmist global warming. 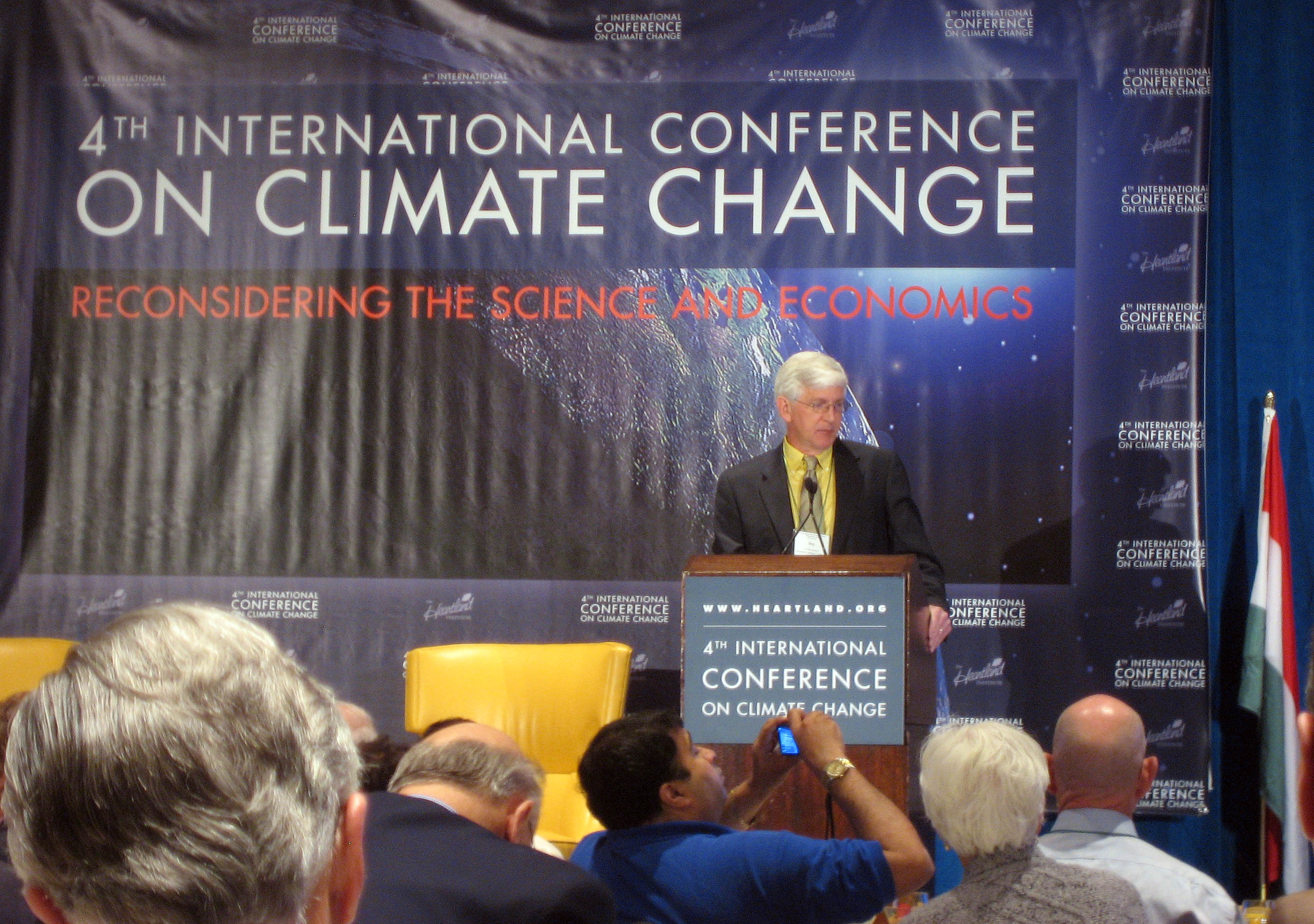 More than 700 scientists, social scientists, policy advisers and others attended the conference. Following the path blazed by independent Australian senator Steve Fielding in 2009, which resulted in his exercising a decisive vote against the ETS in the Senate, this year two serving politicians attended from the antipodes; they were Liberal Senator Cory Bernardi from South Australia and ACT climate change spokesman from New Zealand, John Boscawen, who were joined by a number of US politicians and ex-politicians. Also in attendance was former New Zealand Minister for Science, Barry Brill, the author of a devastating recent expose of the unreliability of the claimed NZ historical  temperature record.

As for previous Heartland conferences, audio and video versions of the presentations are now accruing on the web, here. In addition, numerous commentaries and articles that discuss the papers that were delivered, and their significance, are appearing also on many other web sites – a comprehensive list being provided by Marc Morano at his site ClimateDepot. Rather, then, than attempting a summary in the limited space available here, which could only be partial and influenced by the particular selection of talks that I was able to attend, I encourage readers to refer to these (and especially to the original) sources.

It goes without saying that not all participants in the conference were in agreement as to the precise nature of any climate-related problem, let alone on any necessary solutions. Nonetheless, what participants did seem to agree on is that there is little empirical evidence in support of the public alarm about dangerous, human-caused global warming; that the same alarm has been greatly overstated; and that much of the unjustifiable overstatement comes from a political agency – to whit the UN’s Intergovernmental Panel on Climate Change (IPCC) and its zealous coterie of scientific supporters.

Sure, carbon dioxide is a minor greenhouse gas, and, sure again, a gentle warming occurred over the last part of the 20th century. But hey, climate change happens naturally, both warmings and coolings; second, there is no substantive evidence that the late 20th century warming had a human causation; third, there has been no substantial further warming since 1998 despite a 5% increase in atmospheric carbon dioxide; and, fourth, there is increasingly strong evidence that negative (cooling) feedbacks are a dominant response of the climate system to increased greenhouse gas, as elaborated in papers at Heartland-4 by Dick Lindzen, Roy Spencer and Willis Eschenbach amongst others.

The four Heartland conferences have had a number of features in common, of which perhaps the most surprising has been the general failure of the mainstream press to attend and report on the matters discussed, and this despite the pedigree academic credentials of many of the persons presenting papers. But don’t take my word for the capabilities of the scientists and social scientists concerned: rather, check for yourself by watching some of the plenary and other addresses that have been filmed and made readily available by Pajamas TV.

One interesting exception to the press boycott was the BBC, who sent along their senior environmental reporter, Roger Harrabin. In contrast, nary a glimpse was sighted of any reporters from the Australian Broadcasting Corporation, and I am informed that the conference has passed almost entirely unnoticed in the Australian press. Given the Labor government’s repeated attempts to introduce carbon dioxide taxation in pursuit of the goal of “stopping global warming” (a policy now deferred until 2013), it is surprising indeed that the Australian media exhibited no interest in a major international conference at which copious evidence was provided that global warming is no longer a threat (if ever it was), and that global cooling may well be underway. Robyn Williams, Tony Jones and the Kerry O’Brien team, where were you?

One explanation for this determined lack of media interest may be the relentless politicisation to which the science of climate change has been subjected. Despite a prevailing conservative atmosphere, it is a matter of fact that attendees at Heartland-4 included persons from the far left to the far right of the political spectrum, with many doubtless representative of the swinging middle also. One might comment that, similarly, attendees at the many regular IPCC-related conferences throughout the world exude an air of left-wing rat-baggery, despite which the world media queue up to give them clamorous coverage. Thus in many people’s minds the IPCC angels and their media supporters are seen as left wing zealots floating on fluffy clouds, whereas the rationalist, independent scientists who are critical of IPCC policy advice appear as right wing deniers who represent the forces of darkness. That such shallow and inaccurate demonisations are prevalent in the public debate is perhaps the major reason why sensible calls for an alternative, prudent, adaptive approach to climate change (part of what Roger Helmer has called the “counter consensus”) – have yet to be heeded.

In contrast to IPCC events, then, and probably because the Heartland Institute makes no secret of being a libertarian organization, the Chicago conference appears to have been dismissed in advance by many media outlets as representing the views of a few, extreme, right-wing “climate deniers”. This is so to the degree that some scientists (and especially those many supporters of the IPCC view who were invited to participate) are reported to have declined to attend the conference because to do so would have resulted in their reputations being tainted by association. Those many independent scientists who did participate in the presentations and vigorous discussions at Heartland-4 were doubtless amused by this silly notion. Indeed, it can be laid to rest by noting the comments of one of the rare scientists present who acknowledged his sympathy to the views of the IPCC, namely Scott Denning from Colorado State University; Dr Denning commented at the closing plenary session that:

I want to thank you very much for inviting me to this conference. I have to say that I’ve learned a lot here. It was very gracious of [Heartland Institute Senior Fellow] James [Taylor] and of the organizers to bring me here. And I actually feel that it’s really too bad that more of my colleagues from the [IPCC] scientific community didn’t attend and haven’t in the past, and I hope that we can remedy that in the future.

One of the most concerning things about the global warming debate, which came up time and again in informal discussions at the Heartland-4 conference, is the degree to which young people today are being given a misleading and unbalanced education in environmental matters in general, and on climate change in particular. The following comment, which was posted as part of a recent online discussion of climate change books at Amazon UK, provides an all too typical example:

Recently, I attended a meeting at York University on this subject, and was interested to see that several students there, when confronted by the overwhelming scientific case for CO2 not being responsible for global warming, simply said "I cannot accept that." When asked why not, they replied along the lines that the newspapers and politicians all agree, so what have scientists to do with it. I was astounded!

It is therefore pleasant to be able to close this article by reporting on the active and intelligent involvement of two quite different groups of young people in the Heartland-4 conference. The first group comprised some lucky senior secondary school pupils from Wisconsin (The Potter’s School) who had been brought along by their energetic teacher Adele Weeks to be exposed to the wide range of views on climate change that were on show. At the same time, and while at the conference, Adele taught an external chemistry class over the internet, thereby setting two stellar examples of good teaching that other teachers should be encouraged to emulate. 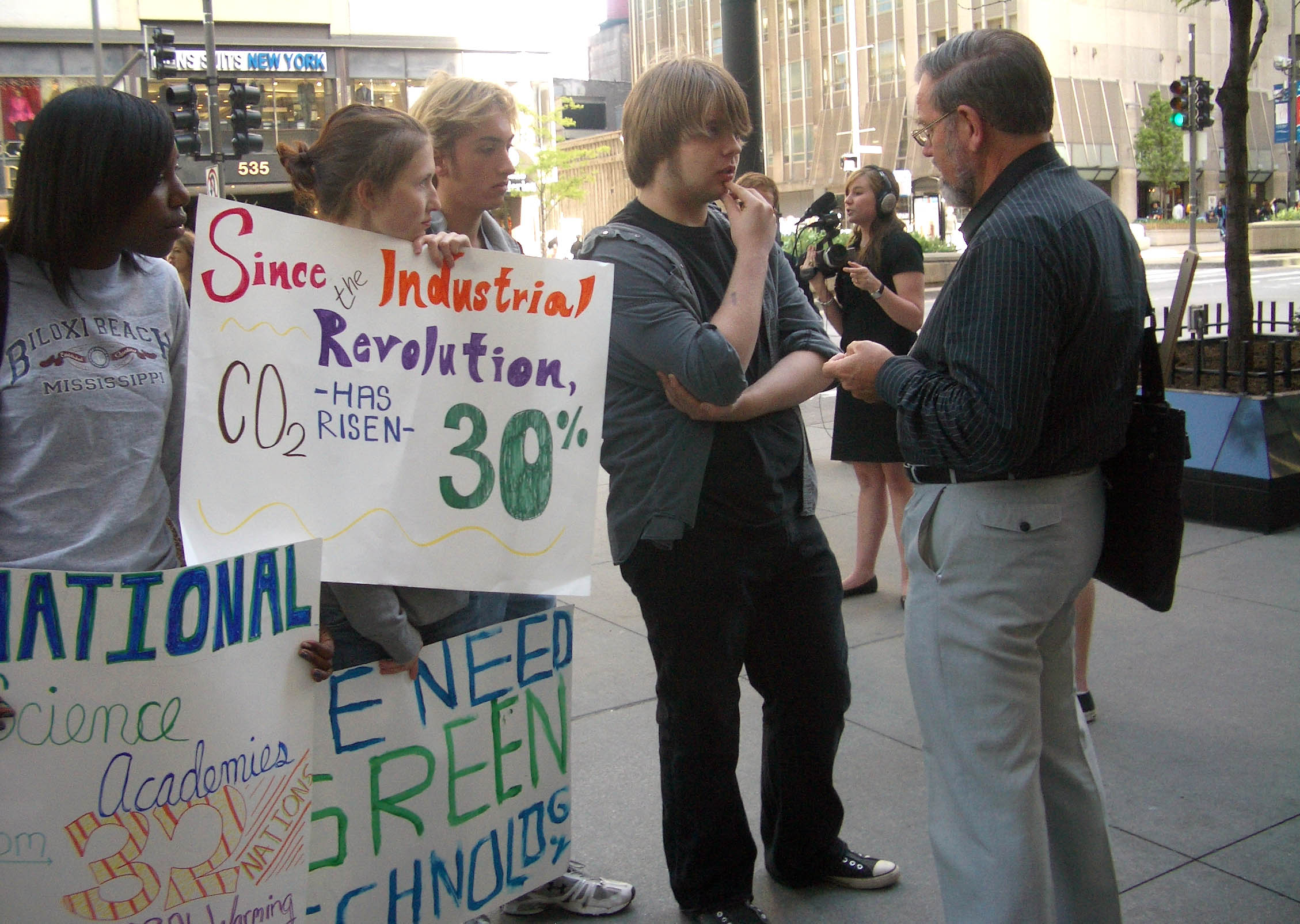 The second group of young persons (pictured above) were to be found on the pavement of busy Michigan Avenue, outside the conference hotel’s front door. There, attached to various banners and signs, they were chanting vociferous slogans against the conference demons that their imaginations told them were inside the hotel – all the while being goaded or organized by two busy, older cameramen from major environmental organisations. Not, at first sight, promising material for rational discourse. Happily, however, and as is generally the case for most young people, when approached politely and firmly, and engaged in discussion, they became almost eager participants in their own de-propagandization.

One day soon, the majority of the world’s young people are going to wake up too to the way that they have been deceived about climate change, and come to understand that the high extra taxes and charges that they are going to contribute towards “stopping global warming” will result in precisely no climatic effect and no environmental benefit. Those who hosted and attended the Heartland-4 climate conference should be proud of the part that they are playing in alerting all citizens, the young included, to the need for prudence, caution and balance in the climate debate – all of which are needed in advance of any further large public expenditure on this environmental cause célèbre.