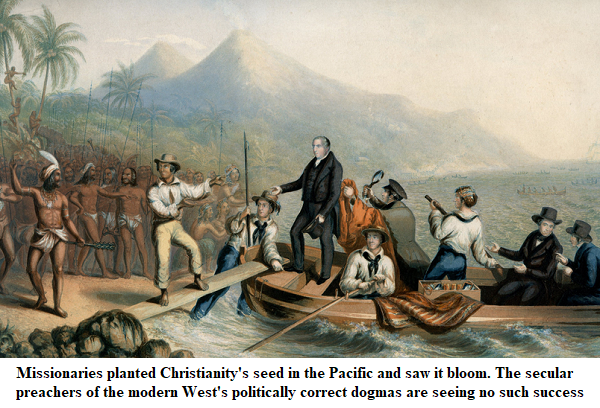 Here’s a strange fact. Marxism, which is atheistic and derides religion as “the opium of the people” seems to be no obstacle to the communist Chinese striking up relationships with countries in the Pacific where, to continue the metaphor, the opium is consumed more enthusiastically than probably anywhere else in the world. In other words with countries that are devoutly Christian.

Beijing’s expansionists are currently hoping to enter into various “collaborative” agreements with ten Pacific nations, and thought they had two in the bag, These were with 92 per cent-Christian Solomon Islands and 98 per cent-Christian Samoa. These countries are now playing hard to get, though the reason is certainly not the irreconcilability of their religion with China’s official atheism. It’s more likely to be on account of pressure from the US and Canberra and promises of more Australian cash to, effectively, “outbid” Beijing. Undaunted, the latter, in the person of their foreign minister Wang Yi, who has been making a stately progress around the Pacific, remain ready to negotiate. China sees things in the long term.

Leaving aside that we can hardly complain about Chinese influence in other countries when we ourselves have leased the port of Darwin to Beijing, could it be that we have become used to taking the nations of the South Pacific for granted? Have we been regarding the region as our own backyard and ourselves, with a lesser contribution from New Zealand, as its sole benefactors for so long that we were unprepared for the intrusion of the Chinese? Have we simply assumed that, although the colonial era is long gone, independent small nations in the Pacific would always look to us as the regional “leader” and to our vast aid program as their economic lifelines, never imagining a Marxist dictatorship could have any appeal to countries formed, if not always governed, according to the principles of Western democracy?

Western democracy was not our only shared value. Until recently there was Christianity. That was when Australia would still have described itself as a Christian country. The suddenness with which we have thrown that out the window and adopted instead all the badges of Western secularism – hatred of our history, the new anti-white racism, prejudice against the family, education for ignorance, abortion as easy as going to the dentist, gay and lesbian marriage, “trans” mania and an official subservience to the cult of the LGBT etc. string of initials – means that this profound change in our national identity may not yet have registered in those Christian Pacific countries where it is still imagined that we are much the same as them in our beliefs and values.

But we are not, and nowhere is the change more starkly apparent than among the élite of our nation, a caste which of course includes our diplomatic representatives. No doubt there are still some practising Christians among them, but by and large our foreign service is as secularised as the rest of our ruling class. And it shows when they are dealing with nations and cultures that are still unashamedly Christian.

In an article published by independent policy think tank the Lowy Institute, Anna Gibert, an international development adviser with wide experience in Vanuatu, Fiji and Tonga, describes Australia’s bilateral relations with Pacific nations as “stunted without an appreciation of the primacy of Christian belief in the lives of many Pacific Islanders.” Arguing for a “reset of Australia’s relationship with Pacific island countries”, she believes we cannot expect to understand the people with whom we are dealing without understanding their religion. “For secular Australians,” she writes,

Christianity is often disdained as contrary to all that is progressive, intellectually credible, and culturally appealing. Yet for many Pacific Islanders, a shared Christian belief and conviction in the spiritual dimensions of existence … are a defining factor in the strength of relationships and personal trust.

She notes that sometimes there is outright hostility on the part of Australian representatives.

I have been in social and work gatherings where such beliefs are openly mocked and decried as backward and deluded, and where no concern has been given as to whether Pacific islanders are present.

Chinese Marxists might share the “backward and deluded” viewpoint but they would never be tactless enough to say so openly.

It is instructive to compare patronising Australian bureaucratic attitudes to Pacific islanders’ religion to the slavish reverence accorded by the same bureaucratic establishment to Aboriginal myths and superstitions. And of course our new Foreign Minister, Penny Wong, has promised that “first nations” wisdom will henceforth guide our overseas policy. It will be fascinating to see how that translates into action.

In the field of international “aid” the problem is sometimes not simply a failure to appreciate the importance of religion in Pacific life but an arrogant assumption of the superiority of secular culture. For all the cant preached by Western relativists about all cultures being of equal value, modern bien-pensants are as confident as any past colonialist or missionary that theirs alone is the true culture of enlightenment and progress.

Why otherwise are Western aid organisations, including those sponsored by the Australian government, so assiduous in seeking to impose on countries they are “aiding” the secular West’s obsessions with “diversity” “inclusion”, “gender balance” and women’s “empowerment”? This all comes as part of the package, so that you wonder whether the aid such entities ostensibly dispense is not the Trojan horse by which these progressivist notions are to be insinuated into cultures that still believe in traditional marriage and Christianity and the other conventions instilled in them by an earlier generation of colonialists, but which are sneered at and condemned in the contemporary West.

The crusade against “climate change” is another obsession we have exported. This is propagated with great zeal by various Australian entities in the Pacific. Its most recent manifestation was the spectacle of Penny Wong in Fiji spouting clouds of verbal vapour about the “climate emergency” – an emission of foreign ministerial hot air that must have contributed a few degrees to local warming. Perhaps under Ms Wong’s new Aboriginal-inspired foreign policy she will have the bone pointed at any Pacific nations that are backward in setting their climate house in order.

Not that she’ll find many. The lure of lavish Western “compensation” for the supposed ravages of climate change has induced Pacific national politicians to profess keen belief in the doomsday narrative put about by enviro-alarmists, especially regarding sea levels. After all, Pacific nations are poor; you can’t blame them for wanting the money. Which is why in principle they have no qualms about accepting Chinese communist munificence either, whether we in Australia like it or not.

With more evident respect for the religious sensibilities of Pacific islanders perhaps we could out-manoeuvre Beijing. Or as Anna Gibert puts it, “it would serve our relationship-building interests to try and understand better, and respect, the deepest values of those with whom we seek to engage.”