The Dire Lesson of Rome’s Rise and Decline 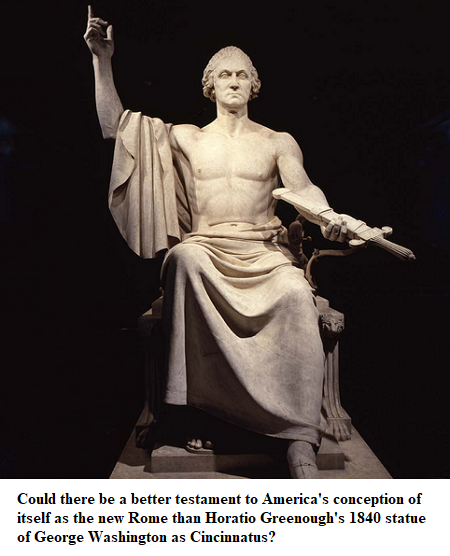 For nearly 250 years Western societies have been fascinated by two inter-related events, one located in the distant past, and the other in the apparently increasingly close future: the fall of the Roman Empire with its causes and consequences; and apocalyptic expectations about the dire fate of America and of Western Civilization more generally.

A recent Australian article by Tom Switzer well illustrates this concern (“Nixon warned of US decline 50 years ago”, The Australian,  paywalled). He quotes a 1971 speech in which President Nixon draws this parallel and argues that “the great civilisations of the past, as they have become wealthy, as they have lost their will to live, to improve, they then become subject to decadence that eventually destroys the civilisation,” and he laments: “The United States is now reaching that period.” Reflecting on the half century that has passed, and especially on the collapse of the Soviet Union, Switzer observes: “Today China is rising, Russia is resurgent and the US is again [as it was in 1971] consumed by division and self-doubt. Will the US disprove the forecasts of decline again, or was Nixon ahead of his time.”

In fact, Nixon was giving voice to a perennial concern, one that goes back to at least 1776. Indeed, there is a degree of inevitability about the association of Rome with America, with the implication that the known fate of one might inform us about the likely fate of the other. Indeed, so close are the two narratives entwined in American culture that this has become a political factor in itself.

This association arises partly from the co-incidence that Edward Gibbon began to publish his monumental History of the Decline and Fall of the Roman Empire (1776-1789) in the same year that the United States Declaration of Independence was adopted by the Second Continental Congress. The educated elite of the thirteen colonies had embraced an inspiring vision of Roman history, according to which a simple, hardy community had held fast to the virtues of family life, sober conduct and self-discipline, and had consequently built a great society. They enjoyed also a good knowledge of Classical authors and references to Plutarch, Livy, Cicero, Sallust, Tacitus, and their works abounded in colonial literature, especially those works that contrasted a corrupt and oppressive present with a noble past characterized by virtue, simplicity, patriotism, integrity, justice and liberty.

The Founding Fathers knew they were acting as midwives at the birth of a titanic new force in the history of civilisation, and they knew well what was at stake.  Consequently, the dire fate of Rome was discussed frequently in the constitutional debates in Philadelphia, strengthening, for example, the case of those who argued for federalism instead of the centralized system that was taken to have fatally weakened Rome. The educated elite were also steeped in a notion of civic virtue derived from Rome and epitomized by George Washington’s ‘Rules of Civility’, and by his example as a contemporary Cincinnatus – the citizen-soldier who led the republic to military victory before downing arms and returning to his simple life on the land, resisting the temptation to usurp the power of the republic.

The study of Classical history had other vital lessons. For example, in his Defense of the Constitution of Government of the United States of America (1787), John Adams examined the governmental systems of twelve ancient democratic republics, three ancient aristocratic republics, and three ancient monarchical republics, finding them inferior to that adopted by the new American republic. Cato the Younger was seen as a hero of republican liberty against those who would tyrannize the people, while Cicero suggested the pivotal principle that republics must be based on a system of checks and balances to prevent the abuse of power. Consequently, as Russell Kirk concludes in The Roots of American Order, the “Roman concept of law and obligation, as variously expressed by Polybius and Livy and Virgil and Cicero and the Stoics, passed into American Political thought and jurisprudence, and is permanently embedded in the American Constitution”.

In the theatre, Joseph Addison’s Cato: A Tragedy became one of the most popular plays in eighteenth century America. Based on the last days of Cato the Younger, it deals with such themes as liberty vs. tyranny, republicanism vs. monarchism, and the duty of the individual to hold fast to his beliefs even under the threat of death. It was well known to the Founding Fathers, and was even performed for the Continental Army at Valley Forge. It gave rise to such iconic declarations as Nathan Hale’s “I only regret that I have but one life to give for my country”, and Patrick Henry’s “Give me liberty or give me death”. After independence, Washington, D.C. duly acquired its own Capital Hill named after Rome’s Capitoline Hill, while the Jefferson Memorial (below) was a scaled-down version of the Pantheon, Union Station derived much from the Baths of Diocletian, the Washington Monument recalled Trajan’s Column and many other obelisks of ancient Rome, colonnaded federal buildings abounded, and even Goose Creek off the Potomac was renamed after the Tiber. 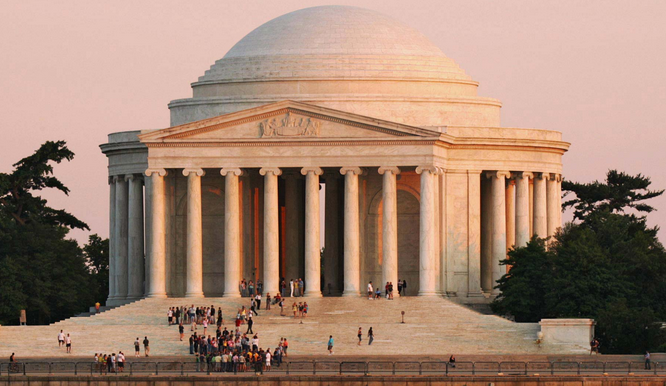 Conversely, Americans have always had misgivings about Rome and what it might portend for their own young country as it continued its continental expansion and pursued its ‘manifest destiny’ on the global stage. These fears found expression in one of the greatest and most popular works of American art, Thomas Cole’s five-part series of paintings, The Course of Empire (1834-36, reproduced below). This monumental historical panorama attracted huge crowds and gave brilliant visual expression to a popular enthusiasm for pastoral agrarianism as the ideal state of human civilisation, and the corresponding fear that the path of empire would lead inevitably to excessive centralization, urbanism, corruption and decay. 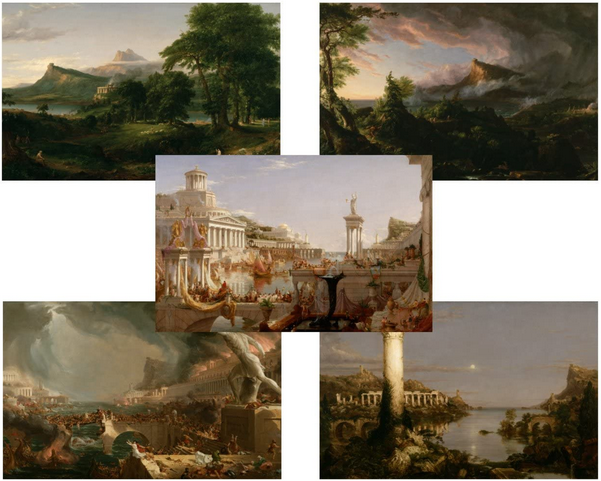 After depicting an Arcadian scene of pastoral tranquillity, Cole, in his third work, The Course of the Empire – The Consummation, imagines a future American imperial metropolis that is indistinguishable from a great Roman city. The next work however, The Course of Empire – Destruction, depicts its fate. In a scene inspired by the Vandals’ sack of Rome in 455, an enemy fleet and hordes of barbarian warriors lay waste to the city and all her people, raping, pillaging, and destroying every aspect of civilization; even the sky is being consumed by a dark, stormy vortex. Finally, in The Course of Empire – Desolation, we see the meagre fruits of imperial ambition, as the once grand buildings are swallowed up by the returning wilderness.

As Cole’s gigantic masterpieces demonstrate, concerns about the implications of empire recur throughout American history. Indeed, “the anxiety he expressed … is a very American one, and would raise its head at intervals right down to [the present]: the fear that this culture, so new, so full of shine and strength, could be swept away in one catastrophic eye-blink”, as Robert Hughes put it in American Visions: The Epic History of Art in America.  And, crucially, the threat was not external military might but internal moral weakness, with the “seed of apocalypse … planted right in the heart of the American democratic experience”.

As these examples illustrate the fear of internal betrayal and collapse has been present in American history since the early years of the Republic and is embedded in the nation’s cultural DNA. It is this perennial concern to which Nixon gave expression, as Switzer reminds us. This is a timely warning as America, divided to a degree unprecedented since the Civil War, faces an increasingly bellicose China and Russia. Given Australia’s precarious relationship with China we have a vital interest in how this great historical and cultural tension resolves itself: will America drag itself out of the mire of the Cultural Wars, Identity Politics, and deep internal subversion, or will she succumb, as did Rome, to the relentless onslaughts of barbarism and allow the world to slip into another Dark Age?