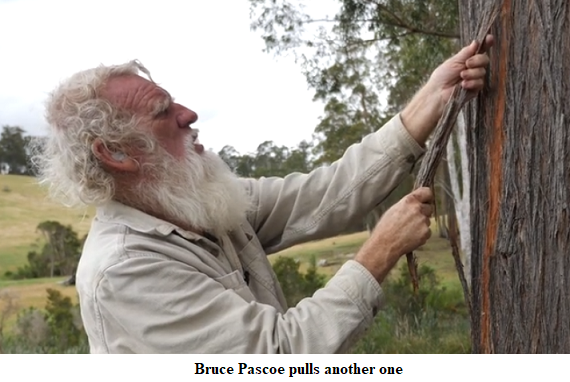 I sometimes wonder if I’m becoming a tad obsessive about Bruce Pascoe, but let me observe in my defence that he is like a mouth ulcer – you just can’t leave it alone. My father once had a mouth ulcer that didn’t go away and, when he finally consulted his doctor, was diagnosed with a cancer that took away half his jaw.   So, while it’s tempting to think of Pascoe as a mere irritant, I worry that he is a symptom of a wider cancer spreading through our society.  I’m talking about the corruption of truth — and rope-making too.

I’ll bet you didn’t know the Aboriginal people could make rope well before 1788.  Well, courtesy of ABC Education, your primary school children and grandchildren will be better informed than you, thanks to Professor of Indigenous Agriculture, Yuin, Burnurong and Tasmanian man Bruce Pascoe.

In a less-than-riveting four-minute segment, which can be watched here,  Professor Bruce imparts the ancient wisdom of the ‘old people’ by taking a strip of bark from a stringy bark tree while noting that those he claims as ancestors would have used the moist bark from closer to the trunk, something Bruce refuses to do because no tree should be damaged for a mere demonstration. It seems the technique is to separate the bark into two strips and wind each around the other.  But if that seems a bit complicated, Bruce tells us there was an ancient formula and proceeds to lay it on with a trowel.

For example, an Aborigine on the east coast of NSW would point the two strips to the north and then fold one towards the mountains and the next towards the sea and so on.  Do you think you’ve got that?  He doesn’t explain

the method used in Central Australia, but I’m sure Pascoe could invent one upon request.  He goes on to note that explorer Thomas Mitchell was impressed that Aboriginal fishing made from such ropes were almost indistinguishable from European nets, even to the knots used.  So, according to Pascoe’s logic (used, for example, in the cases of government and bread-making) this would make the Aboriginal people the inventors of ropes and knots.

In another episode, also part of the Aboriginal Ingenuity series, the Professor covers language and plants. There’s not a lot about plants – lettuce gets a mention as does murnong and the bulbine lily, and language also gets very short shrift.  Bruce confesses that he doesn’t know the names of indigenous plants except for murnong.  So, he is relying on the kids to look them up online, or to ask their elders.  It might take them 20 minutes or six months but however long it takes ‘that person has made an incredible contribution to their culture, if they can find that word’. Apparently  he has so much work on his bark trencher that he ‘needs the young people to become inquisitive about their culture’.  So as far as language is concerned, we learned another name for murnong – naramah – and that’s it.  Still, it only occupies two minutes.   We can’t ask too much of the overstressed ABC budget.

The ABC Education History series of video clips comprises 42 episodes, 22 relating to Aboriginal issues and culture, the other 20 looking at what we might call mainstream history.  They include four episodes based on the ludicrous ‘Back in Time for Dinner’ series hosted by Annabel Crabb, which I reviewed here.  There is one titled ‘Identity, Racism and Connection’ and a couple of lifestyle pieces (growing up in the 1900s and school in the 1940s).  One on asylum seekers, one on women’s lib and another on tales from around the world.  I count only eight to cover serious topics such Federation, Parliament House, the First Fleet, the gold rush, and so on.

I understand education ministers are about to review the draft new national curriculum.  I don’t hold out a great deal of hope they will be either willing or able to stem the tide of woke history’s revisionism, but their efforts will not be helped by the ABC’s unaccountable foray into the classroom, which appears to lack any semblance of quality control. The prominence given to Bruce Pascoe’s faux history is the proof.

Silence When There Should Be Screaming

Who is an Aborigine?