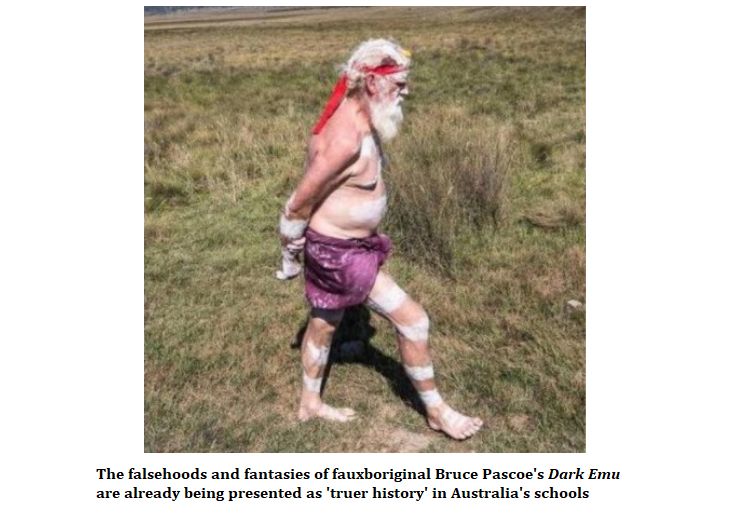 Bruce Pascoe began his plenary talk, Imagining Climate Adaptation Summit, on April 19, 2021, by claiming he is a Yuin, Bunorong and Tasmanian man on Bungala country (Port Lincoln), and praising the “professional thinkers” of academia.

What follows is the content of that Port Lincoln address, which the alleged men and women of science in the audience lapped up as if it was holy writ.

Bruce pascoer in his own words: Of course our people say we have always been here and this is a conversation our country can usefully have in future. Let’s say it’s 120k. A lot of archaeologists and anthropologists and politicians argue of course, journalists too,  this is exaggeration, I am gilding the Aboriginal lily.

When I first went to school I was told Aboriginal people were here 5k years; then when  finished school on King Island 10k, by the time I crossed the strait to Mornington High, 20k, by the time finished high school 40k through carbon dating.

University people thought it could be even older. Last year of course  we were told cave in NT had shown people living 65k years ago

We cant expect our politicians to start using dates like that, but the trajectory showing us we have a lot of science backing up  the old age of Aboriginal people this country.

It is interesting it takes in periods of climate change desertification, glaciation and tells us Aborignal people survived with language intact, that is indication of Aboriginal people staying exactly where they were. There was certainly movement of people from Bass St north and south. We have a story the whale told us how to leave Bass Strait — but we took our languages with us, those languages merged with other languages.

It is yet to be engaged by the academic community,  we are searching for the language of Bass strait, we believe with can trace that language amongst people who had to leave Bass Strait, languages merged with other languages, that is a hugely important  indication of diplomacy, diplomacy that should be manna for the world, for people to leave one country and enter country of their cousins without warfare and with language intact is indication that humans can cooperate. It is not absolutely necessary for us to go to war, we should be able to conduct ourselves to meet adversity, such as climate change, and can do so without another group losing … in our adversarial political system, adversarial economic system and social media system we presume we have to fight each other.

Aborignal life is telling us it is not the case — we can cooperate — ‘human’ has proven that  she can cooperate with other humans. I should have said he, in the past it would be he who has chosen war or peace. Evidence of Aboriginal people  having chosen peace — evidence, because they are still here…

…this is an unusual circumstance, as is the top northwest corner of Australia with massive land loss, massive human drift inward towards interior, these are disturbances which Aboriginal people survived and with languages and culture intact.

It shows us we can do this, we can’t do it without our contemporary political and eco systems changing,  I believe we can meet the challenge of climate change by doing very simple things. One is to stop ploughing land and growing perennial crops which will sequester carbon and hold soil. One of our contributions to climate change is our abuse of soil — the idea you can continue ploughing light soils, soils release carbon into atmosphere. Two summers ago, just before big fires, we ploughed land around Brewarnna and half NSW to produce  cotton, a very thirsty crop in process,  our soil/air  ended up in New Zealand! This process, as farmer or as minister for agriculture, ought to be anathema. We should not allow it to happen, to continue allowing it means we don’t understand  this country.

How did Aboriginal Australia organise itself as a political system so abuse of this kind couldn’t be tolerated?

Aboriginal people believe earth is our mother. The British adversarial system and eco system, which is profit at all costs, means we can  in ways which indicate to people from outer space ‘these people despise  their grandchildren, they don’t care what our planet looks like in another generation’s time. They don’t care what they do to the country as long as they make a profit and they get huge ugly houses, huge ugly  cars … We can do it better than that and Aboriginal Australia has shown humans can operate in better way … I am advocating for change in agricultural methods  in country.

…. I am suggesting we eat roos instead of cattle and sheep, which are incredibly destructive of soil. I personally bought  a lamb roast because I know how to cook it. I have sage and  herbs  from the garden,  making it beautiful. I also eat ‘roo. People argue against use of ‘roo, saying they are beautiful [and it’s a]  very soulful sight of a female ‘roo nurturing,  young both asleep in the sun in my front yard. Beautiful …  really warms the heart. It is not disturbing to think at some stage I will shoot  young male ‘roo illegally to get meat. Young roo is only as beautiful  as young lamb — they’re still animals, I have no compunction killing roos same as lamb. ‘Roo is better in our country, soft-footed  animals so  much better for soil….

Is it asking us to become communist? We have to cooperate. If we can think of accounting systems that will allow us to bank in Bahamas legally and have that to protect our ecosystem, or some people’s ecosystem, we should be able to shoot ‘roos over very wide range of country and have the dividend from sale roo be shared equitably among relevant farmers of  prvite ownership. The only thing difficult would be that fences have gone and we’ll manage land in different way. I don’t see that sharing the dividend of country is a descent into communism,  I see it as asking us to cooperate.

Our  farmers have shown they can pull down fences when big tractors were invented , drive by GPS, the only efficient way to drive them 24 hours day: you pull down fences and drive straight lines until you reach the end of that section, maybe  already crossing state border …  then you turn 90deg and get going another three or four days and turn around, this is a way for farmers to harvest over huge areas. They divide [the harvest] amongst them [and] we should not allow some of our right-wing politicans to say it is  communism and socialism. It is a co-op because we don’t despise our grandchildren. We sensibly start looking at those things that would allow us to continue as species. In the book Sapiens we told if sapiens last another 1000 years it will be almost miracle. That is shocking thing to anticipate.

For our descendents can we reverse that, can this animal which is us,  Sapiens, continue,  or do we allow our own grumpy nature to undermine our very existence?

It is worthwhile for us to have a go at cooperation. Aboriginal people have proven that system is capable of working for the human species. To look at Aboriginal life with disdain or charity, as Australia has done, is really anti-intellectual point of view. I am not pretending Aboriginal people were all good and all wise; what I am insisting on is to look at longevity of Aboriginal cultural advance and see stability, cultural political economic stability, and see that is good model for the human race.

Right-wing politicians will say Aboriginal people didn’t invent the wheel. No, we didn’t — harnessing the wheel to a ‘roo will be terribly unsuccessful. Aboriginal people probably anticipated that. Mentions of wheel created so much in Western life and destroyed so much. The wheel also was hooked to canon, and it launches  satellites into space — now destroying outer space. We should not allow people to dismiss Aboriginal life out of hand because of some comparison with Western life, which is destroying planet…

I can’t think of another civilisation which managed human spirit and problems of geographic, econ and cultural life as successfully as Australian Aboriginal people

… I am more Cornish than Aboriginal, but investigation of my background dragged me into contemplation of these things. I didn’t do it because of my own research brilliance but because I knew nothing about history of my family. Having done that, what I am suggesting to Australia, this is valid  academic research because it offers support to study civilisation where those people decided at very early stage, say 120,000 years ago, that everybody would be  belong to certain portion of the land [but] land would not belong to them. Their responsibility would be to the Earth itself, not to themselves, and Earth’s responsibility not to us. Our responsibility is to her….

… I think we are capable of it. I think it will create a different world. We can choose to create a better world  or a problem … I think our species is capable of enormous cooperation and, dare I say it, love.”

David Schlossberg, chair: Beautiful thank you so much, Bruce, really amazing and perfect introduction  to next few hours today. This idea to acknowledge and learn  from Aboriginal communities …  is the theme for today.