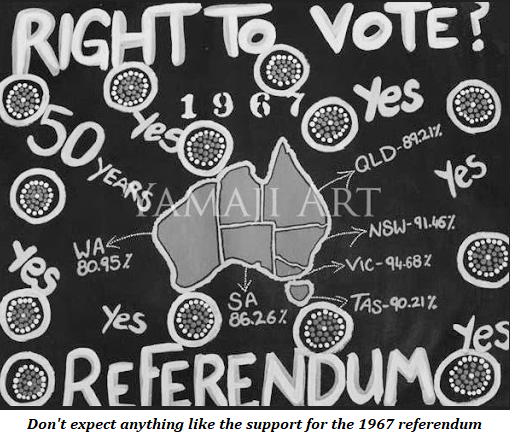 Noel Pearson endorses and advocates the view that constitutional recognition of Aboriginal people is effectively bi-partisan policy and suggests  that such a ‘reform’ is inevitable.  He further insists a majority of citizens also support ‘Recognition’. But if constitutional recognition is to come to pass, there is one obstacle that will have to be overcome: the obligatory referendum without which no change to the Constitution can be implemented.

Pearson quotes a poll claiming 57 per cent of voting-age Australians support recognition.  By itself, that means nothing, given that the required referendum must be approved by a majority of voters in a majority of states while also achieving an overall national majority. At every referendum, voters are to be informed by properly presented official ‘YES’ and ‘NO’ cases.  To date we have heard a lot of the former but nothing of the latter. What follows is a precis of the NO case.

To begin with, let’s look at the term ‘recognition’.  Most people would regard it as synonymous with ‘acknowledgement’.  That is, they would believe the proposal will be to acknowledge in the Constitution that Aboriginal people were the original inhabitants of this continent. That would seem a worthy and innocuous aim. But, in the context of the Constitution, ‘recognition’ means something more than that. Chris Kenny, writing in The Australian, sums it up this way:

Tony Abbott argues that recognition of Indigenous Australians would not alter the Constitution so much as complete it. This is true because the Constitution brought together six groups — the peoples of six colonies — and the people it overlooked as partners or participants were the original inhabitants.

Implicit in that sentiment is the idea that indigenous Australians should have been a seventh partner in Federation.  If this were the acknowledged basis for including indigenous Australians in the Constitution it would necessarily imply that some form of distinct political power resided with them. In today’s terms, it would give them the same political status as the six states.

What form will recognition take?   How will it be expressed in the Constitution?  Pearson hasn’t been explicit, but the best guide to what he might be thinking is contained in the report of the Expert Panel on Recognising Aboriginal and Torres Strait Islander Peoples in the Constitution, established by Julia Gillard.  It proposed the removal of two existing sections and inclusion of three new ones.  Two of them capture the essence of the proposal. The first is to remove sub clause (xxvi) of Section 51, which states:

The Parliament shall, subject to this Constitution, have power to make laws for the peace, good order, and good governance of the Commonwealth with respect to:

(xxvi)  the people of any race, for whom it is deemed necessary to make special laws.

This is now regarded as a ‘racist’ provision.  But in 1901 it was intended to allow the Commonwealth government to control the conditions under which foreign labourers from China, the Pacific Islands and elsewhere could work in Australia.  At that time, these workers were seen as threatening the conditions of white Australian workers.  In 1901, Aborigines were not covered by this provision.  At that time, it read (emphasis added):

(xxvi)  the people of any race, other than the Aboriginal race in any State, for whom it is deemed necessary to make special laws.

This original exclusion reflected the reality that, in 1901, Aboriginal affairs was seen as a state responsibility. In 1967, the vast majority of Australians, enthusiastically supported by the indigenous population, gave the Commonwealth the power to make laws in respect of Aboriginal people, by removing the above exclusion from (xxvi).

Second, it is proposed to replace clause (xxvi) with a new Section 51A, which reads:

Recognising that the continent and its islands now known as Australia were first occupied by Aboriginal and Torres Strait Islander peoples;

Acknowledging the continuing relationship of Aboriginal and Torres Strait Islander peoples with their traditional lands and waters;

Acknowledging the need to secure the advancement of Aboriginal and Torres Strait Islander peoples;

The Parliament shall, subject to this Constitution, have power to make laws for the peace, order and good governance of the Commonwealth with respect to Aboriginal and Torres Strait Islander peoples.

As anyone who has read it will know, the Constitution is not an aspirational document. It is, to put it simply,  a rule book that defines the powers and operation of the federal government. Its prose is arid and to-the-point. And that is as it should be in order to minimize the potential for misinterpretation.  The wording of the preamble in the proposed new section is totally at odds with both the rest of the Constitution and the imperative that constitutional provisions should be as clear and unambiguous as possible. No existing provision contains any reference as to why it was included. Phrases such as ‘acknowledging the continuing relationship…’ or ‘respecting the continuing cultures…’ without defining those ‘continuing relationships’ or ‘continuing cultures’ are so ambiguous as to offer an unlimited opportunity for misinterpretation.

As a matter of principle, the Constitution should not be altered lightly. And if it is to be amended, new provisions should be as unambiguous as possible.

Pearson claims ‘We are a nation that does not recognise its Indigenous peoples.’

If by recognition he means acknowledgement of Aboriginal people, their place in our history and society, their culture and their achievements, the Constitution – a document almost nobody reads – is the last place you would look.

Instead, you’d find it formally expressed in the Aboriginal and Torres Strait Islander Peoples Recognition Act of 2013.  You’d see it in the Aboriginal and Torres Strait Islander flags flying outside every public building in the land. You’d hear it in the ‘acknowledgement of traditional owners’ recitations or the ‘welcome to country’ ceremonies performed at almost every public event.  You’d witness it in the performances by Aboriginal artists at the opening ceremonies of every major cultural or sporting event.

To reiterate, constitutional changes should be both compelling and unambiguous.  The proposal outlined above fails both tests.

The Cure for Aboriginal Grievance Syndrome