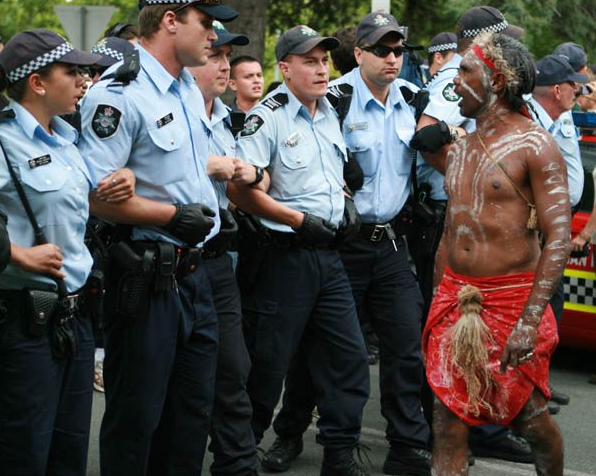 Black Lives Matter (BLM) activists and their sympathisers claim to care about all black lives, which prompts me to pose a question: Why are BLMers not protesting when blacks die at the hands of blacks? Instead, during the current eruption of outrage, they focused at first on Aboriginal deaths in custody, which demonstrated what a charade they were staging, given that Aboriginal people are less likely to die in custody than non-Aborigines. Such an inconvenient fact required a change of emphasis, hence the narrative’s switch to claims of systemic police brutality. The method? Cherry-pick examples and ignore context.

Consider a recent article by Australian activist Amy McQuire in the Washington Post. In regard to the alleged racist brutality of police and the justice system, she informs her US audience that “the violence is evident in the wounds on black bodies and in the life stories of Aboriginal people.” Actually, Amy, if it’s the wounds on black bodies you are interested in, I can take you to some remote communities where you will see all the wounded black bodies you want. The perpetrators are mostly Aboriginal, so you wouldn’t be interested in telling Americans about that, not when it is more fun, and wins you more attention, to slander an entire nation in the eyes of a wider world.

The stock ‘evidence’ BLM followers share and promote captures police struggling with Aboriginal people, typically with the first few crucial seconds of the clips missing, therefore also absent is the context in which the incidents unfolded. This is cherry-picking enhanced by omission and deceit, but it serves its purpose in promoting the meme that police, all police, are racists from Central Casting. Do you think your message encourages confidence when police assistance is needed — when, for example, a black perpetrator is beating the daylights out of a black victim? Guess what? The police aren’t summoned and there are more of those “wounds on black bodies” that Amy would have the world conclude are inflicted solely by whites.

Here’s a question for the professional protesters: How would you like it if short snippets of recent videos showing Aboriginal people fighting each other were shown on the news each night? Would you be happy for Australia to judge Aboriginal people the way you have judged Australia’s police? Put that shoe on the other foot and you will find it very uncomfortable. Why do they love doing this? Thomas Sowell offers an explanation:

The reason so many people misunderstand so many issues is not that these issues are so complex, but that people do not want a factual or analytical explanation that leaves them emotionally unsatisfied. They want villains to hate and heroes to cheer.

Making villains of police officers is a convenient distraction from the appalling rate of black-on-black violence and homicide here in Australia. And, yes, of course complaints of police brutality should be investigated. However, unless you’ve served as a police officer what you consider as ‘brutal’ and ‘unjust’ is most likely very far removed from the truth on the street. A resisting suspect is likely to be pumping adrenaline — the fight-or-flight response — and very aggressive, especially when alcohol and/or drugs are involved. Any police intervention seeking to subdue an aggressive person will likely appear ‘excessive’ to the inexperienced, especially if it is presented out of context as a few seconds of edited footage on social media or the TV news shows which love the argy-bargy much more than they respect truth and context.

Many times I have heard blactivists dismiss high rates of community violence and child abuse with the throwaway  line, ‘Walk a mile in our shoes before you criticise.’ Maybe they should try walking a few yards in the shoes of the police just to see what it’s like. They would likely discover that the last thing police need in pressure situations is some loud-mouth sticking a phone in a police officer’s face while shouting “I’m filming this!”

If they really want to help make things better — which, of course, they don’t — footage of black-on-black violence, of child abuse and community dysfunction would be a catalyst for conversations about the need to address real problems rather than largely notional ones.

Who am I kidding!

Anthony Dillon identifies as a part-Aboriginal Australian who is proud of both his Aboriginal and non-Aboriginal ancestries. Originally from Queensland, he now lives in Sydney and is a researcher at the Australian Catholic University. For more, visit www.anthonydillon.com.au

It’s Hard Not to Say ‘We Told You So’