When Whatever it Takes isn’t Working 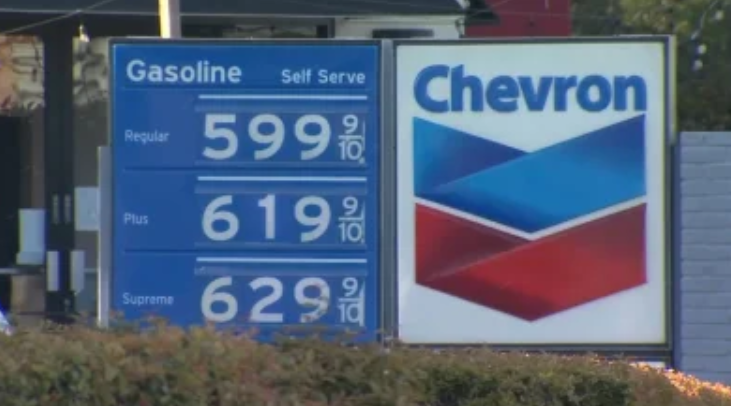 Even on a good day the lot of a San Francisco police officer must not be a happy one, so it is easy to feel a special sympathy for the two patrolmen who came upon an elderly gentleman and his younger male companion, at least one and possibly both in nothing but their underpants, grappling at 2am for possession of a hammer. That may be what happened or maybe not, depending on whose account you choose to heed and with which US political party your sympathies reside. What might be true is the latest narrative (or perhaps tomorrow’s version or the day after’s) which has so far progressed via leaks and slight, successive and variously amended updates from the original report of a stranger intent on murder and torture smashing his way into a palatial San Francisco home. What can be stated with certainty, and this is the only thing about which we can be irrefutably sure, is that the 82-year-old now recovering from surgery to repair a fractured skull is the husband of House Speaker Nancy Pelosi. Pity the lot of those poor cops, who must by now be wishing they had plugged the alleged assailant when the opportunity presented itself. There is a lot less fuss and bother about reporting to the coroner than the ordeal by testimony, affidavit and, one guesses, the departmental pressure that likely awaits them, poor buggers.

American politics can plumb some bizarre depths even at the best of times and just now, six days before the midterm elections that will determine control of House and Senate, there is something in the air only those word-stacking Germans might be able to capture in contiguous syllables. Fear, yes indeed, on the part of Democrats, who need lose only six lower house seats to see Ms Pelosi replaced as Speaker. For Republicans, riding high on polls that suggest seats might turn from blue to red in record numbers, the big challenge is to maintain with straight faces that the outcome remains in doubt and only a massive turnout of the party faithful on November 8 can guarantee victory.

In the House, that a ‘red wave’ will crash down on Democrats is beyond dispute. Where goes the Senate is somewhat less certain, allowing for the impact of early voting and the usual chicanery involving vote harvesting, cemeteries, old folks’ homes and, a new wrinkle as of 2020, mail-out ballots. Pennsylvanians, who will decide one of the four key battleground states, began voting as long ago as mid-September and by the time the Senate contenders met for the their one and only debate last week more than a million ballots were already waiting to be counted. Those early votes will likely favour Democrats, most originating with the political machines of the big cities, where Democrat administrations oversee both the canvassing, the tallying and, that old Tammany Hall term, the “ward heeling“. That said, the GOP needs to pick up only one Senate seat to gain an absolute legislative majority, which the bookies reckon easily doable.

This is why Paul Pelosi’s wee-hours whack to the head is figuring so large on the stump in these final days. Simply put, the Democrats have nothing better to offer than fear, which they have been serving in heaped helpings for months. 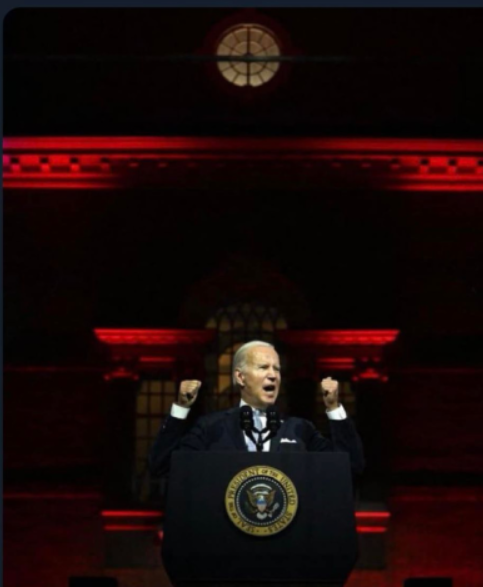 In his infamous red-and-black address (above), the one that looked as if Leni Riefenstahl was responsible for the visuals, the President who came to office pledging he would  “bring America together” delivered one of the most remarkable, indeed, deeply unsettling addresses ever presented by a Commander in Chief. “There is no question that the Republican Party today is dominated, driven, and intimidated by Donald Trump and the MAGA Republicans, and that is a threat to this country,” he began less than a minute into his speech. The only comparable moment in terms of naming America’s enemies would have to be FDR’s address to the nation after Pearl Harbour, such was the current President’s vitriol. Republicans, Biden continued, were set on fanning “the flames of political violence that are a threat to our personal rights, to the pursuit of justice, to the rule of law, to the very soul of this country.” No mention was made Trump supporters feeding puppies into woodchippers, but give the old fellow time and he’ll get there eventually.

That Philadelphia address, complete with armed Marines standing at attention in the background,  its content and aggressive disparagement of all the evil, stupid and divisive folks who refuse to vote Democrat built in its turn upon the January 6 hearings, with all their partisan questioning, closed doors, toxic leaks, spurious hearsay and nakedly political agenda. Donald Trump, were you to believe one young lady’s turn at the witness table, had even wrestled with the driver for control of the First Limo so that he could join the ‘insurrectionists’ at the Capitol. Only an idiot child or a New York Times reporter could believe that one, so the tall tale received widespread ink, pixels and prime time minutes. 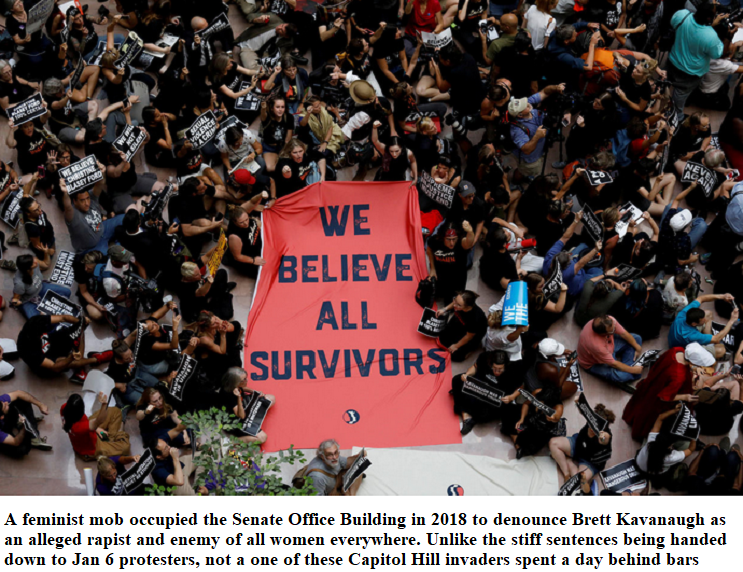 To hear Joe Biden tell it, or any other Democrat just now near a microphone, Paul Pelosi’s alleged assailant is another right-wing extremist, undoubtedly possessed by the demon spirit of Donald Trump, and therefore yet a further symptom of the illness that erupted 10 months ago beneath the Capitol’s dome. Strangely, when posses of shrieking feminists invaded the same building in 2018 to protest the slandered Brett Kavanaugh’s elevation to the Supreme Court, well that was widely interpreted by the Washington Post, NYT and other organs of the liberal establishment as an affirmation of American democracy’s ruddy good health. The 300-plus arrests that day? No longer worth mentioning and, for those who did, the mainstream media’s ‘fact-checkers’ were at their hair-splitting and jesuitical best in rejecting any valid point of comparison between then and Jan 6. With only two Republicans on the panel, each picked by Ms Pelosi on the strength of their ‘Never Trump’ credentials, there was no cross-examination of witnesses and ne’er a hint that sifting truth from testimony had ever been on the panel’s list of objectives.

Is it that the Democrats have mated stupidity with a desperate, anything-goes lunge to retain power. It would seem so, as one of those RINO (Republican in name only) panelists was Liz Cheney, who was not merely thumped in her Wyoming primary but electorally eviscerated. Did Democrat strategists notice that her alarums about Trump and his Deplorables weren’t winning hearts and minds? Surely they must, yet nevertheless decided, viz Biden in Philadelphia and since, that the us-versus-them strategy would work if only the volume were cranked up to 11.

What else was in the Democrats’ arsenal? Oh, yes, that’s right — abortion after the overturning of Roe v Wade. Except that didn’t fly because, just now, Americans have more on their minds than legal and constitutional abstractions, those “penumbras and emanations” discerned in the Constitution by previous Justices but scotched by the current majority. Abortion, just for the record and the benefit of ABC viewers, was not ‘banned’ by the Supremes; rather, as in Australia, the issue was handed back to the states and their voters to decide.

THERE was nothing abstract about the late-middle-aged woman waiting in line on Monday for her Subway sandwiches at a highway fuel stop on Interstate-80, in the rural depths of western Pennsylvania. The sign above the counter apologised in advance for slow service, blaming a post-COVID labour shortage for the failure to recruit enough counter jockeys, but that wasn’t what was on her mind. “He’ll be pissed when he gets inside,” she said of her husband, at that moment pumping diesel into their very large white pickup. 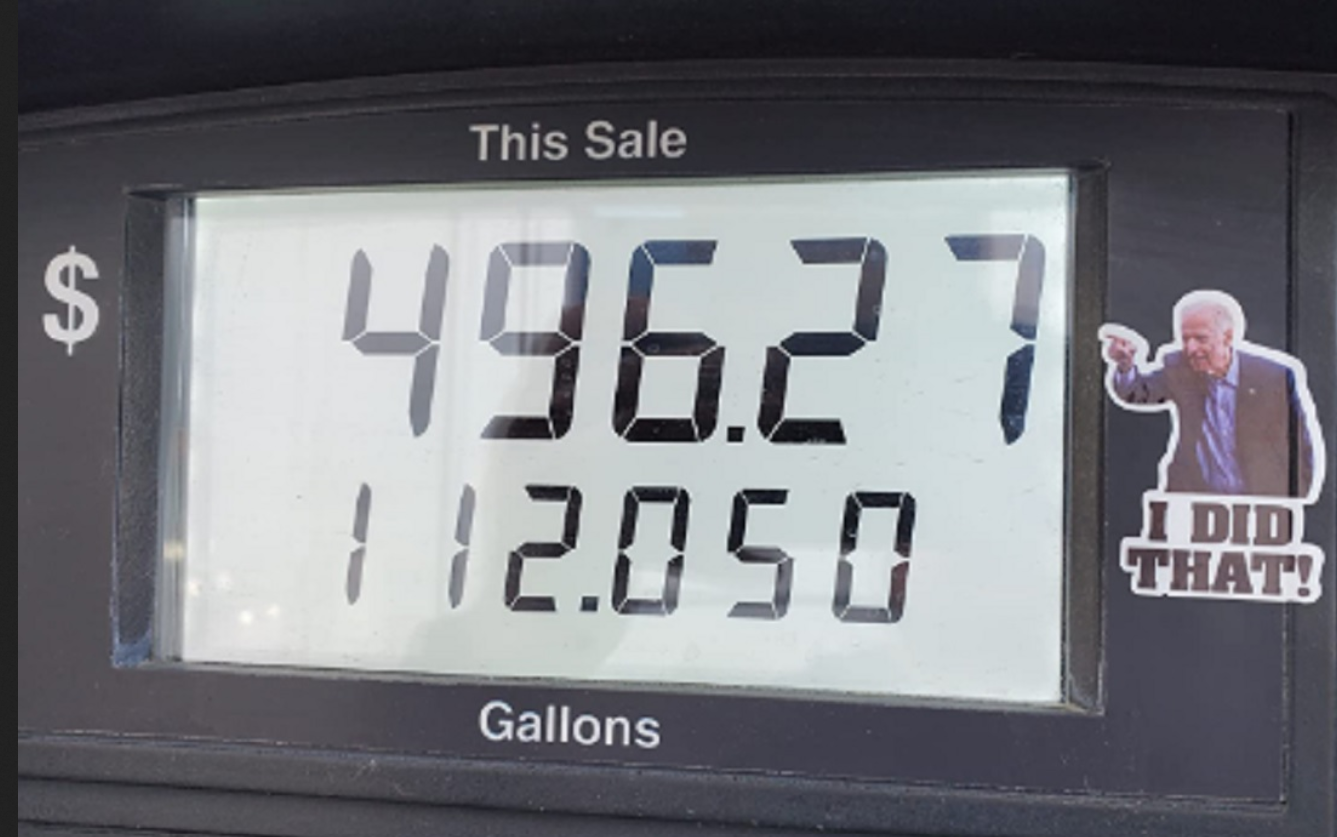 “Two hundred and ten bucks to fill the tank,” he began, then adding the further cost of four jerry cans, at five US gallons apiece, strapped into his truck’s tub. Total purchase just just shy of $300 but a smart move all the same because, at current estimates, the US has only 25 days’ of diesel fuel in reserve, which is why the price is $6 a gallon and rising. And it gets worse. Because of Pennsylvania’s key part in the early days of America’s late-nineteenth century oil boom, many homes in the northeast still depend on oil heating to keep the winter outside. There is a ‘strategic reserve’ but the worst estimate reckons it would be exhausted in a day; the more cheerful sees no more than an additional three days’ reprieve.

And then there is other ‘strategic reserve’, the one supposed to keep American cars on the road and in which, incidentally, Australia’s emergency oil reserves reside, courtesy of a 2020 decision by the Morrison government. Should the Albanese government believe those stored stocks will  be needed it should get them to this side of the Pacific quick smart as the Biden administration has been making deep inroads into the reserve to increase supplies and lower prices. Amazing, isn’t it, how even the most market-averse governments suddenly appreciate the law of supply and demand when an election is in the offing and petrol costs between $3.80 and $5.50 a gallon, depending on the different states’ varying taxes.

Outside on the highway, eighteen-wheelers thundered past, their every mile adding further oomph to overhead costs, retail prices and, of course, inflation. Biden went cap in hand to the Saudis and came away not with more oil but less. Similar overtures to Venezuela met with no more success, hardly surprising given that the US has imposed sanctions on both countries.

So here we are, the Democrats staring into the abyss, with nothing to boast about and less than a week to go. Nothing for it but to keep cranking up the hate, and if that means depicting Paul Pelosi’s attacker, a drug-addled hippy nudist and all-round nut case as a typical Republican, so be it. Beyond that there’s only cheating, and there will be plenty of that too.

34 thoughts on “When Whatever it Takes isn’t Working”