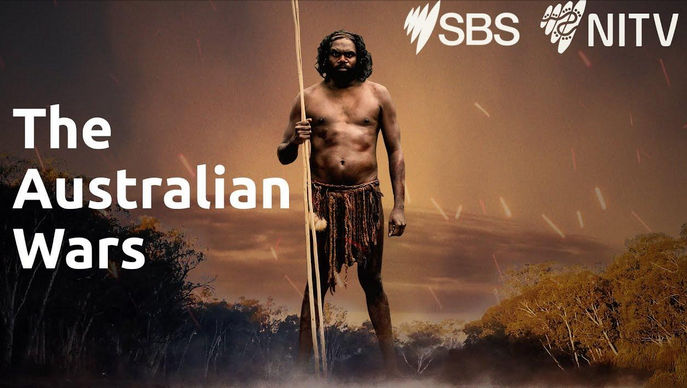 Currently, the SBS documentary series The Australian Wars is being aired on the SBS and NITV channels. The director and presenter of the three-part series is Rachel Perkins, the Aboriginal activist who also directed The First Australians. Perkins has quite mastered the art of the political documentary, also known as propaganda, and her works are up there with Leni Riefenstahl’s Triumph of the Will and Sergei Eisenstein’s Battleship Potemkin.

This series is a part of what we are being told is a process of “truth telling”, and apparently this process is defined as being whatever an Aboriginal activist says to the non-Aboriginal majority of Australians.  This Leftist political campaign to claim exclusive ownership of the “truth”, and therefore the exclusive right to have their ideology taught in the classroom, the university lecture hall and across the media generally, is being done with a lot of taxpayer money using the agencies and platforms that were created by the Australian government, such as the ABC, SBS and NITV.

We are now witnessing a concerted effort by Aboriginal politico-social activists and their allies on the Left to denigrate and de-legitimise the Commonwealth of Australia and its history, with the ultimate goal being to replace it with a federation of sovereign “First Nation” states. The subject documentary, The Australian Wars, is an effective propaganda tool (or should we say “weapon”?) deployed towards the goal of recognising and returning the sovereignty of the so-called “First Nations”, and hence the dismantling of the Commonwealth of Australia. Unfortunately, most conservative politicians appear to be unaware of this threat from the Left.

It would appear that the Left has been the undisputed winner of that public debate known as the “History Wars”, because there is now no questioning or challenging of the mainstream narrative about the historical relations between European settlement and Aboriginal peoples.

For those who would prefer not to watch The Australian Wars, SBS does provide a 3.36 minute video clip of the introduction of the series, which sets out the basic premise. On the SBS ONDEMAND website, it says of the series:

Rachel Perkins journeys across the country to explore the bloody battles fought on Australian soil and the war that established the Australian nation, seeking to change the narrative of the nation.

The first episode is described as:

The story of Australia’s first wars, calling for the nation to acknowledge the First Peoples who died in these conflicts and for the Australian War Memorial to recognise them.

This series has been supported by Screen Australia, a Federal Government agency that supports Australian screen development, production and promotion. Their website describes The Australian Wars as:

A polemic documentary series that tells the extraordinary story of Australia’s First Wars – and calls for the First Peoples who died in these conflicts to be acknowledged by the nation and officially recognised by the Australian War Memorial in Canberra. First Wars is a documentary series which investigates the frontier conflicts between 1788 and 1928 and their impact, asks Australians who we are, and what we want to become.

Our mission and impact

We connect filmmakers, activists, educators and change-makers and empower them to maximise their advocacy and impact goals.

It is our mission to advance awareness and inspire action on important social issues by supporting independent documentary filmmakers and organisations on the front-lines of social change, and amplifying the impact of their works to encourage empathy, activism and social transformation.

Our expertise, guidance and resources help creatives, not-for-profits, educators and change-makers work together to achieve their goals and maximise their social impact through the power of documentary.

We enable impact documentary projects to raise tax-deductible funding and make it possible for passionate philanthropists to collaborate with filmmakers to tell stories that change lives.

Of the subject documentary The Australian Wars, the Documentary Australia website is expansive in describing the objectives, expectations and “impact” of the series:

The Australian Wars is a 3 x 1-hour documentary series for SBS Television that tells story of Australia’s frontier conflict. Delving into the archival record of Australia, it brings the major battles, military tactics and the historical figures who engaged in this land battle that swept the country over a hundred year period. These are the wars that established the new nation Australia. From the battles in the upper Hawkesbury in 1791 and across the continent to the final stages of pastoral supremacy in the Kimberley.

A short summary of the issue the documentary is addressing

This series explores the wrongful occupation of Australia without acknowledgement of Aboriginal property rights. This led to a violent period of conquest that has left a legacy of intergenerational trauma and poverty that is endemic in Indigenous communities today. The denial of these foundational rights has contributed to ongoing denial of Australian history and opposition to treaty making. This series is a major component of truth telling on a national scale that we hope unlocks a wider dialogue about these issues.

What is the impact vision statement of the documentary?

To contribute to a process of truth telling that reaches both Indigenous and non-Indigenous Australian audiences across multiple generations.

What outcomes does the project hope to achieve from making this documentary?

IMMEDIATE CHANGE
Wider understanding of history of frontier conflict and aspiration for truth telling, treaty making and recognition.
Increase in community memorialisation.
Uptake by educators in educational resources associated with series.
Engagement in the From the Heart campaign
A national and regional monument/s to the Australian Wars
Review of the Australian War Memorial Council’s policy in relation to frontier conflict

How will this documentary achieve its outcomes?

Progressing both a national and regional conversation about frontier conflict.

How will partnerships with this project help inform the project development?

The State Archive of QLD is planning a significant exhibition and digitisation of its archive to coincide with broadcast. This could be extended to archives in each jurisdiction. Records of frontier conflict are held in collection institutions across Australia and it is an opportunity to shine a light on these collections.

What actions does this project hope for its viewers after seeing this film?

Look into the histories in their regions. Embrace memorialisation of frontier conflict. Sign up to campaigns related to recognition. Study and extend their knowledge beyond the series within the classroom environment.

What is the projects indicators for success?

SHORT TERM:
Screenrights – measure of annual usage
Broadcast – number of viewings in ratings and online streaming
Commentary – supportive articles & reviews in both conservative and progressive press
Sign ups – to the From the Heart campaign
Memorialisation – increase in community engagement at frontier conflict sites

The material set out above leaves no doubt as to the political objectives of The Australian Wars, and the medium of television is a powerful tool to further those objectives.  Those of the Albanese Labor government are only too happy to grab their boards and ride the wave of Aboriginal “truth telling” all the way to constitutional recognition, treaty, republic and the Voice.

What of the Liberal/National opposition?

They appear to be completely unaware of the threat to Australian democracy and the ultimate integrity of the Australian nation state that is behind the so-called “truth telling” agenda of the Aboriginal activists and their Leftist fellow travellers.

Considering the agencies dedicated to promoting documentary series such as The Australian Wars, and the powerful influence of the television medium towards the shaping of public opinion and belief, it does not bode well for the future of the Australian nation, unless the conservative opposition can wake up and bring on a public debate.

43 thoughts on “Propaganda on the Taxpayer Dollar”

The Unstolen Generations of Tasmania