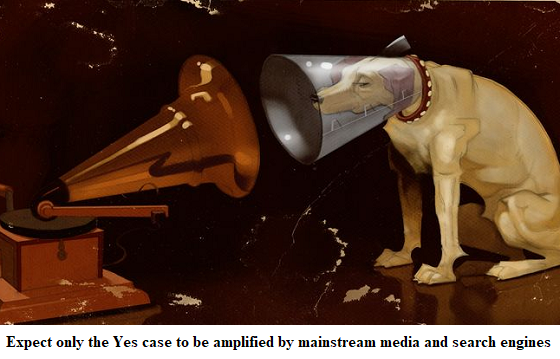 With the proclamation by Prime Minister Anthony Albanese that he will endeavour to implement the Uluru Statement from the Heart, via a referendum in his first term of office, the question arises if it will be deemed morally, ethically or politically acceptable for a voter to cast a ballot in the negative? The evidence of 2017’s same-sex marriage debate suggests it will not, with ‘No’ advocates apt to be marginalised by the media and shunned by Google’s search-engine algorithm.

The Uluru Statement calls for the establishment of an agency or entity within the Parliament, whereby people identifying as Aboriginal will have a “voice”.  At present it is completely vague as to what this voice will look like and how it will operate, but presumably it represents something above and beyond the basic Australian right of free-speech and representative democracy which all Australians, regardless of race and/or colour, hold equally.

The Uluru Statement implies that the Voice is much more than an opportunity for Aboriginal people to stand on a soap-box and say what’s on their collective minds. Rather, the Voice would be part of the mechanism of Parliamentary decision-making, but why? NITV, SBS and ABC networks already provide a platform for Aboriginal people to speak. If it is to be more than a gesture or publicity stunt, the Voice, if it becomes law, must exert a significant and tangible effect on the legislative function of the federal Parliament– exactly what is intended.

The Uluru Statement has had a profound effect on the Left, where it has been embraced with a near-religious reverence.  Albanese has already got the Yes campaign off to a very good start with empathetic words on the subject often spoken.  Of course, the more intellectual Left has long educated us regarding the evils of the European and Anglo-Saxon — how they used their Cartesian, materialist split-mind to force domination over Mother Nature and her life-affirming holistic indigenous peoples.  And now the Aboriginal people are speaking directly from their heart to the hearts of those caring and progressive peoples, such as Albo, who seem as affected by the Uluru Statement as if they had been listening to Jesus give his Sermon on the Mount!  As surely as the sun rising tomorrow, anyone venturing a rational argument against the Voice will be received with the profound distaste and insults the Left directs at those who beg to differ from its agenda.

It is instructive to look at the Australian Marriage Law Postal Survey, held between September 12 and November 7, 2017, which led to the Parliament passing the Marriage Amendment (Definition and Religious Freedoms) Act on December 7 of that same year.  Prior to the postal survey, there was great alarm raised in the mainstream media that there would be a debate of any kind as to whether the definition of marriage in the Constitution should be changed, with anguished cries that any such exchange of conflicting views would only serve as a legal forum for homophobic hate-speech to be freely broadcast.  Media outlets such as the ABC gave voice to the concerns that such speech against same-sex marriage would likely drive vulnerable people to suicide!  There were fervid declarations there should be no referendum, and that the Parliament should simply go ahead and pass the legislation off its own bat. Other voices declared the issue to be a “no-brainer”, stating in emphatic terms the dictum: “When two people love each other, it is only natural that they should be allowed to get married”.

Alas, with few exceptions, only the “Yes” case and its advocates were being broadcast!  Google was no better. When I searched for information, no matter how I worded the query, almost all that turned up was results for the “Yes” argument. From memory, the first two or three pages of results were exclusively pro same-sex marriage. Curiosity incited by the selective results, I then searched for an answer as to why I was seeing only “Yes” results. The answer, as The Australian reported (paywalled), was  that Google tweaked its algorithm to give “Yes” arguments overwhelming precedence. So, not only was there a mainstream media bias towards same-sex marriages, but social media and the internet platforms were also filtering access to information through a mesh of bias.  I think the only thing I saw that wasn’t “Yes” during the so-called debate, was a photo of Tony Abbott holding up a sign saying something to the effect of “It’s OK to say ‘NO’.”

GIVEN the sense of fait accompli that prevailed prior to the same-sex plebiscite, should we not expect a similar campaign of bias across the mainstream media and internet platforms as the Voice is considered?  Surely any “No” opinion will be perceived and reported as being, at best, misinformed or misguided, but it may well be likely that a “No” opinion will be reported as motivated by racism, hate speech and a white supremacist, colonialist mindset, etc.  The emotional climate certain to prevail will see little room for civil and rational arguments to counter the chorus of supporters demanding that the long-suffering Aboriginal heart must be heard without the distraction of alleged racist tropes.

Why bother with the expense of a referendum when Albo’s mandate for action can simply and quickly be accomplished now, within the Parliament, by legislative fiat? That was, remember, the means by which ATSIC was established and that proved quite handy when it turned out to be a corruption-ridden debacle. Unlike the proposed Voice, which would enjoy the protection and permanence of constitutional enshrinement, bringing down the curtain on ATSIC was a piece of cake.

We are facing the possibility of constitutional change that would have been unthinkable to the founders of the Commonwealth of Australia. They sought a voluntary federation of the separate Australian colonies that would create an entity of national character for the inclusive benefit of all. To now contemplate a Constitution that would enshrine racial distinctions, is anathema to the founders’ principle that has created, arguably, one of best nations in the world.  That some sectors of the Australian population have not achieved as much or benefited as much as others is not a failure of the Constitution or the Parliament, and so no change is necessary or likely to be beneficial.