The Bureau of Meteorology issues regular projections and the illustration above is one of them: Tasmania coloured in the darkest of the darker hues that denote the higher temperatures prophesied for August and September — all based, of course, on the settled science of meteorological divination.

As has been so often the case since institutions began to notice that predictions of warmist doom build bigger careers and draw larger tranches of research funds, Mother Nature pays no heed, perversely persisting in painting her winter handiwork in colours from the cooler end of the spectrum. Take the picture below, for example, which captures the beach at Hobart’s Blackmans Bay just after dawn this morning (August 3). 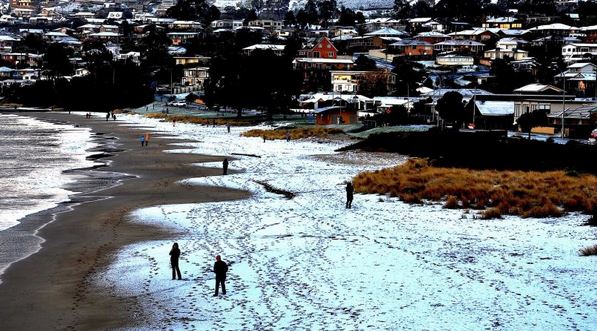 That white stuff is snow and lots of it. Bear this image in mind when, by year’s end, the BoM has done its requisite “homogenising” and “adjusted” the temperature record to show that it has never been hotter.

More evidence of global warming’s latest frigid impact on Tasmania can be viewed via the link at the foot of this post.

UPDATE: While Taswegians build snowmen, Fairfax Media’s weather worrywart and resolute warmist Peter Hannam has turned his gaze from the south to hunt the globe for a spot where temperatures are above average, settling on the Middle East. According to the teaser on the Age’s home page (below) the mercury has hit an incredible 74 degrees, which is 165 degrees by Daniel Gabriel Fahrenheit’s old-fashioned reckoning. 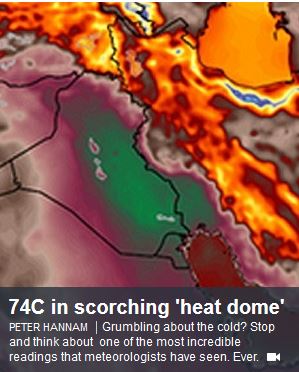 Not until readers click the link and explore Hannam’s latest catastropharian epistle will they learn that the incredible reading is just that, not to be believed. Contrary to the home page’s assertion, the recorded temperature was 46, with those actual degrees of torment enhanced by a measure of wizardry that adds the perceived impact of humidity to the base number.

Delve even deeper into Hannam’s tale and — how astonishing! — it turns out that 165 degrees is far from unprecedented. In fact it isn’t news at all:

The only higher record, though, was 81 degrees, observed in Dhahran, Saudi Arabia on July 8, 2003.

As far as the Age is concerned, the real story would seem to be how it must persuade readers not to think too much about all that snow on the other side of Bass Strait — an effort that is almost certainly not needed, as very few remaining Age readers, like that paper’s journalists and editors, are capable of forming and holding a rational or consistent thought.

Gender as she is writ