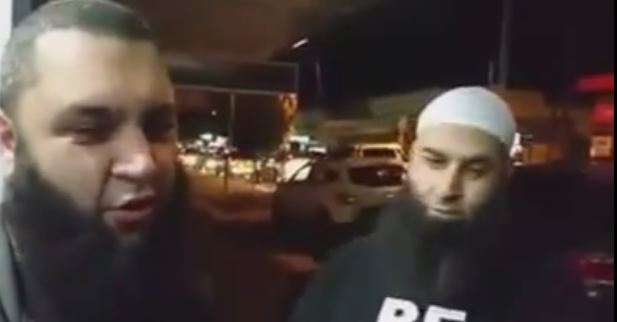 “Death doesn’t come and knock on your door,” says the Sydneysider with the chin fungus on the right, “it knocks you out!”

Exactly what that remark implies is somewhat unclear. Does Death need a little help to deliver the prophesied king hit, as was the case on 9/11, on the public transport systems of London and Madrid, in the Charlie Hebdo office or at a kosher supermarket, a Kenyan shopping mall, a Sydney coffee shop….?

Less difficult to grasp, because he spells it out in no uncertain terms, is the reason for Mr Weird Beard’s agitation: In the Sydney suburb of Greenacre, where the video was shot, he has observed infidels and apostates dancing and listening to loud music! Perhaps the curly toes on the Prophet’s slippers tripped him up while attempting to master the Mecca mazurka, or maybe, just maybe, dancing is haram because it is quite the challenge for one man to jig about with four wives at the same time. That issue is perhaps best left to theologians.

Does local member Tony Burke shake a leg? Perhaps he should, first flying in his kids and ex-ABC girlfriend for the exhibition — no less than business class will suffice — and also summoning the more light-footed members of the local Labor Party branch for a high-kicking public demonstration of multicultural heritage, pride and tolerance. After all, folks were cutting the rug in Greenacre long before the more recently arrived decreed it must only be used for prayers.  Burke could even go nuclear and launch a hashtag — #Illdancewithyou, perhaps — because nothing is so effective at redressing injustice than sharing 140 characters of moral outrage with the like-minded in social media’s Amen Corner.

And if the more hirsute locals are upset by Burke’s defence of disco, no problem. He can regain his electors’ good graces by repeating the ever-popular assertion that wicked Jews are poisoning  drinking water. That will have ’em dancing in the streets, at least metaphorically.

To view the video from which the screen grab atop this post has been lifted, follow this link or the one below.