Four Expressions to Undermine the Constitution 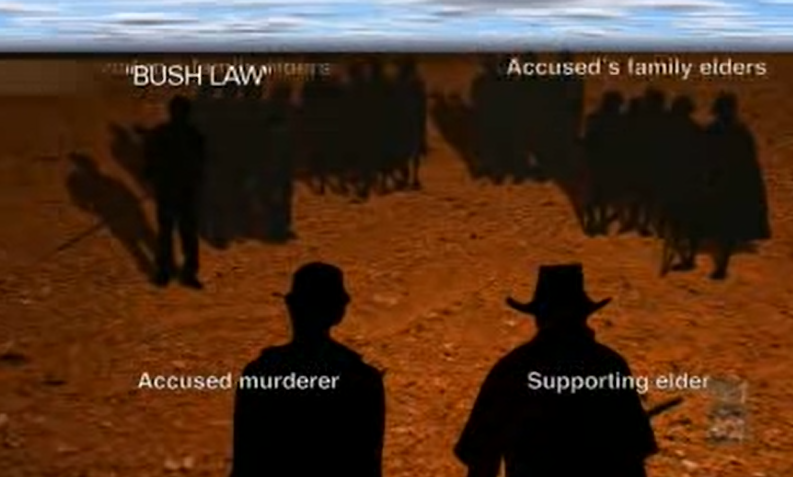 Four concepts and expressions have recently crept into our consciousness and our vocabulary that should not be allowed in our nation’s Constitution. They are payback, humbugging, truth-telling and sovereignty.

A senior Warlpiri Elder says the Yuendumu community will not be able to heal from the death of Kumanjayi Walker until they are able to spill the blood of his killer, Constable Zach Rolfe, in a form of traditional justice known as “payback”.

Coroner Elisabeth Armitage is visiting the central Australian outback community as part of a long-running inquest into the fatal 2019 police shooting, for which Constable Rolfe was acquitted on all charges in March.

While Ms Armitage toured significant sites on Tuesday, Ned Jampijinpa Hargraves told reporters traditional payback for a homicide involved an organised cultural ceremony in which “people have roles and responsibilities to the person who passed away”.

He said the perpetrator would have the chance to have his say and the victim’s family would then decide on a punishment based on the seriousness of the crime, including spearing to both legs for the most serious offences.

“Deep in our hearts, deep in our minds, deep in the community, we want to see justice—we have not seen the blood of Zach Rolfe,” he said.

This matter has been to court—in an atmosphere in which the ability to conduct a fair trial was almost impossible. The trial’s fairness was compromised in the first few days by comments from the Chief Minister, the territory’s Independent Commissioner Against Corruption, the police hierarchy and the elders of Yuendumu. The rush to judgment in this matter was contrary to the basic principles of justice and civilisation.

Despite all the principles of law, statutory or natural, no matter where fault lies, those living closest to former traditions cannot evade payback. There are too many generalisations, people are all different and so are most situations. The Aboriginal culture in which payback was a common and often lethal occurrence has been dying out since the eighteenth century. But its practice remains strong in remote communities and it has not left the vocabulary of the assimilated elites.

Civilisation began when people were able to leave payback behind. People could form villages, towns, cities and nations only when they lost enough of their fear of payback to entrust the administration of justice to chosen leaders. Christianity itself evolved by rejecting payback and turning the other cheek to an avenger.

Left alone since the “great divide” about 8000 years ago when the oceans rose and isolated Australia, New Guinea and Tasmania, the mainland Aboriginal people never lost their fear of payback enough to allow civilisation in any of its forms to develop. In the more closely settled areas like the Torres Strait islands, their settlements had a veneer of civilisation due to their adoption of gardening but it still needed the intervention of missionaries to break the bonds of payback. On the vast areas of the mainland the Aboriginal people never adopted any of the advanced ideas which led to our concepts of society or civilisation.

“Humbugging” evolved from times when sharing what you had in food or shelter with your family or tribe meant survival. It has evolved into an unshakable cult of claiming a right to whatever your kinfolk possess. In the days when most Aboriginal people were not permitted to drink alcohol, two well-known Aboriginal men who had achieved worldwide fame for their talents were jailed for succumbing to pressure and supplying alcohol to kinsmen. The first was Albert Namatjira, the world-renowned watercolourist, and the second was Bobby Wilson, who achieved fame as an actor under the name Robert Tudawali. Humbugging also ruined both men financially.

Now let us look at “truth-telling”. Every person has their own version of the truth, and the truth-telling the elites seem to be trying to impose on us is, “You must listen to my truth but I don’t have to listen to yours.” Black-armband history is not my truth, it is too unbalanced. Unfortunately it is what many of those in education are imposing on our young without also exposing them to the recorded truth of their ancestors. Unless we listen to all the available truth we will not be able to make mature judgments and adequately guide the young.

After 1788 some Aboriginal people were badly treated by settlers and by British government agencies but many others were nurtured and protected. Their lives may not always have been what they chose, but that is the very basis of the settlement which grew into a nation over the last 235 years. The 160,000 convicts transported to this land did not choose it either, except for the few given the choice between transportation and the gallows. Most of them were treated worse and protected less than were the Aboriginal people. Most of the convicts, after serving seven or fourteen years away from their homelands, chose to remain in the colonies with the same rights as free settlers.

Few of the early settlers came here for reasons other than desperation. They came to avoid oppression, hunger and bigotry. Those that came between the world wars came to escape pandemic and persecution. After the Second World War they came as displaced persons and Holocaust survivors, and millions more came from the United Kingdom and from Europe because they saw little future for their families in their ancestral homelands.

No matter why they came or how they came they were transformed by the essence of Australia. They were assimilated into becoming true Australians—a people who had rejected payback, racial discrimination and religious bigotry.

It is unfortunate that the 1967 Referendum, where the majority of voters believed they were removing the final barriers to any Aboriginal person becoming equal to all other Australians, opened the door to the ideologues and their imported socialist beliefs. We allowed their malcontentment to capture the twenty or so per cent of Aboriginal people who had not yet been ready to share modern life, to be herded onto remote settlements and put under the control of their unelected leadership. We kept throwing more and more money at them, which was syphoned off into the coffers of the elite, and the Aboriginal industry grew and grew.

The Aboriginal industry began as a homegrown concern but as it acquired greater funding it branched out and secured a foothold in the United Nations. From there, cloaked in foreign concepts and terminology, it began to distort history. Many of the early land rights cases failed on merit but did not fail to gain sympathy in the legal and academic fraternity. The ability to ignore sympathies is a necessity for barristers and valuers; if they find sympathies or prejudices influencing their judgment they should recuse themselves or retire from the field altogether.

Many barristers who were captured by these influences became judges and it was this that probably led to their over-reach in Mabo (No 2) where the land use by inhabitants of an island less than five kilometres square who lived by gardening and fishing was attributed to the inhabitants of an island 7,592,000 kilometres square, lest the judges be accused of breaching a Racial Discrimination Act. The federal government not only failed to appeal this judgment but failed even to state a case as to why usufructory use of land does not establish sovereignty and did not satisfy any law recognised by any nation in the eighteenth century. Without any cultivation of land in the definitions of Blackstone or Vettel there was no recognition of a civilisation or a sovereignty.

The “gap” which will not go away is in fact a barrier maintained by the very people who claim they are enlightened, who claim that laws should not apply equally, that even today a “race” of people should be insulated from the laws that all other citizens follow. Such people, who support beliefs that would destroy the fabric of this nation, would reduce us to tribes and open us to being ruled by the United Nations or a foreign power. Is that what we really want?

John Singer is a retired valuer-educator. He contributed “The Judicial Over-Reach of the Mabo Case” in the October issue

3 thoughts on “Four Expressions to Undermine the Constitution”

A Voice of Division

The Family Stories of the Behrendts