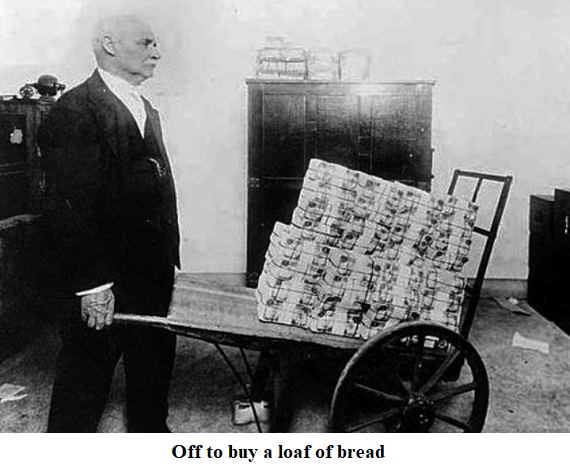 Professor Harald Jähner, a German cultural historian, became well known in the English-speaking world as the author of a best-seller about post-war Germany, Aftermath: Life in the Fallout of the Third Reich, 1945–1955 (2021). Now he has published another remarkable book, Höhenrausch. This book, so far available only in German, deals with the hedonistic, turbulent years of the Weimar Republic. Given the success of his first book, I expect it to be published before long in English.

The history of the short-lived Weimar Republic (1918 to 1933), Jähner justifiably complains, is always described from the hindsight standpoint of the Nazi takeover, as if that outcome had been inevitable. In this book, through quotes from diarists, letter-writers, film-makers, journalists, song-writers, cabaret performers and novelists, the facts and feelings are retold as they appeared to observers at the time. The name Hitler thus appears in a substantial context for the first time only after 74 per cent of the text, namely when we read about the growing brutality of the storm-troopers during the incipient Depression.

The Great War ended with the signature of the armistice on November 11, 1918, at Compiègne near Paris by a new, non-imperial government in Berlin. Most German soldiers were still entrenched outside the territory of the Reich. Now, many returned home convinced that they had been betrayed. The defeat was a sudden, abstract event, the result of a short negotiation in a faraway place. Many returned servicemen resented not only the social-democratic “peace mongers”, but also the wartime emancipation of women. Many among them detested the new republic, whose democratic constitution had been negotiated in a theatre at Weimar, as “Red Berlin” was deemed too dangerous. Some 400,000 of these humiliated soldiers remained in more-or-less organised units (Freikorps), while the communists were certain that the momentum of the Russian revolution would now sweep westward. They preached and practised violence to promote their cause.

The new republic’s social-democratic (SPD) government sought help from returned servicemen to fight the communist threat. And fight they did. The communist leaders Karl Liebknecht and the effervescent Rosa Luxemburg (originally Rozalia Luksenburg) were among the more than 1200 people murdered by the Freikorps. The communists of course engaged in the same sort of extreme cancel culture.

Then, “the money died”. After the armistice, the economy quickly gained momentum. While France and Britain were in the doldrums, the German economy was stimulated by a huge money volume. During the war, it had been inflated twenty-three times on the mistaken assumption that a defeated France and Britain would pay the German government’s debts. After 1919, the new social-democratic government adopted numerous costly social-welfare programs, financing them largely with even more paper money. To help finance the deficits, more than 5000 printeries churned out banknotes of ever higher denominations. In February 1923, a 100-thousand-mark banknote was launched. By autumn a 100-trillion-mark note had been introduced. You could now buy a theatre ticket for two billion marks—or two eggs.

Incipient inflation stimulates economic activity (as we currently observe in Australia). The inflation allowed the government—and all debtors—to quietly acquire a growing part of what private people owned (most notably by income-tax progression, a method popular with some Australian Treasury officials). Businesspeople who still had credit grew frivolously rich by speculation. Production plummeted; unemployment shot up. The poor grew poorer. Price controls aggravated the inflationary distortions. Conspiracy theories and resentments multiplied. Market competition was perceived not as a search for balance between intending sellers and buyers, but as unnecessary conflict; democracy was not seen as a process of debate and compromise to find constructive political solutions, but as improper contrariness and a sign of undue strife. Antagonistic, short-sighted industry cartels and unions, and uncompromising radical political parties, fed this distorted view of markets and democracy. In our time, when societal fragmentation is on the rise, the consequences of a splintering of public opinion in the Weimar period are worth our attention. Fractious societies fail.

Ordinary citizens concluded that honest work, parsimonious living and conservative values did not pay in such a “gangster republic”. As poverty lost its negative connotation, the young shed traditional inhibitions, became cynical and chased after hedonistic gratifications. Frivolity, rapacity, a voracious appetite for excitement, depravity and devil-may-care short-sightedness began to rule life, at least in the big cities. Morality was sneered at. The maniacal pursuit of pleasure offered consolation. The prostitution of “foreign-exchange girls”—often young middle-class women, whose dowry the inflation had devoured—attracted foreigners to the sin city Berlin, where one could live it up for next to nothing. Some of that titillating image still lingers today.

Since we are presently entering a period of high inflation, we should study that mad phase of German history and the social and moral decay it brought. In November 1923, the SPD-led government ended the inflationary merry-go-round in one fell swoop, when banker Hjalmar Schacht was made Reichs Money Commissioner. He stopped the growth of the money volume abruptly, using a confidence trick to prevent the continued expansion of the money supply: the new mark was—so the political elite and the public were told—“backed” by the land rent, the (slow growing) quantity of wheat and rye in the fields. One billion paper marks was now converted to one Rentenmark. A newspaper that had cost 120 billion marks yesterday now sold for twenty pfennigs of the new currency.

Although the inflation dragon was slain, the levity, the careless merry-making and the moral vacuum persisted. The middle of the Weimar era thus became the “Roaring Twenties”, the era of hectic Charleston dancing, nudity and frivolity. Most fads were imported from the US, but upgraded in the Weimar era’s frénésie. It was an era of great creativity in writing, painting, film-making, the theatre, architecture and urban design.

Towards the end of the 1920s, the public got tired of the hectic excitement and the neglect of the long-term and the ethical. City dwellers and more so the conservative rural population began to get bored with it all even before the Depression hit Germany hard, harder than any other European country. Production plummeted again; unemployment shot up. The reactionary Prussian Junker and now republican President, Paul von Hindenburg, who paraded in his general’s uniform and piked helmet and appeared to many as an ersatz Kaiser, nevertheless held the line, refusing the Hitler party a role in government. In the early 1930s, the senile German President was cognitively probably even more challenged than President Biden. Eventually, he installed the increasingly popular “Bohemian private” Adolf Hitler as Chancellor, who promised to impose harmony and unity from above with an iron fist.

A feeling of popular relief about the new socialist nationalist order spread in the population, when Hitler did away with democracy. Jähner is clear that—in the ultimate analysis—it was the mass of the electorate that got Hitler into power. They voted either for anti-democratic Nazi or communist candidates or had become too despondent about political life to oppose the destruction of democracy. The public did not care for democracy any more, in diametric opposition to the first assault on Weimar democracy in 1923, when the people had prevented a dictatorial takeover by widespread, spontaneous strikes.

Jähner is unsparing in his description of the prompt, brutal expulsion of Jews and anti-Hitler activists from their offices. Although this case is not mentioned in the book, I learnt when I worked at the Kiel Institute for World Economics, an academic think-tank, how Nazi thugs acted in early 1933: the eminent economist Professor Gerhard Colm and other Jews were unceremoniously booted out of their offices and thrown down the stairs—a few of the thousands of cases by which talented intellectuals were made unproductive. Most—such as Marlene Dietrich, the author Vicki Baum, the film director Billy Wilder, or the Bauhaus architects—promptly added themselves to the American talent pool. Under President Truman, Colm became influential in post-war US policy-making. As an economist, I ask myself what would post-war US economics have become without the likes of Ludwig von Mises, Friedrich Hayek, Gottfried Haberler, Fritz Machlup and Joseph Schumpeter, all of whom left Central Europe.

In an appendix, Jähner documents what happened after 1933 to the dozens of persons whom he let speak for their Weimar-era perceptions. Quite a few achieved eminent careers, mostly in America. But the micro-biographies of many others end with a heart-chilling “murdered”.

Wolfgang Kasper wrote in the September issue about how the stagflation of the 1970s was overcome.

One thought on “Weimar: Intoxication and Calamity”

The Prose Behind the Poetry

The Animating Force of Religious Faith