The Fictional History of Peter Read 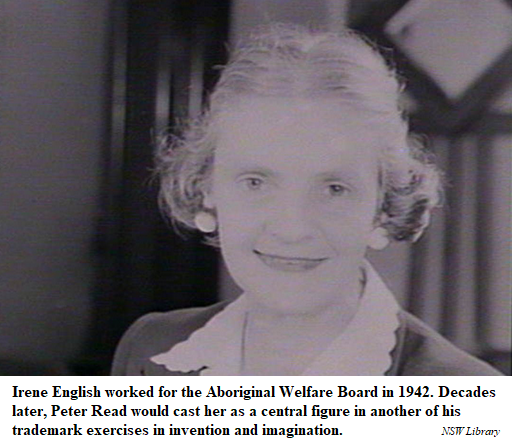 In 1948 the medieval historian H.S. Bennett wrote Life on the English Manor: A Study of Peasant Conditions 1150–1400. In the prologue to his book—“A Faire Felde Ful of Folke”—Bennett described a few days in the life of a fictional peasant in a fictional English village, in the year 1320:

I make bold at the outset of this book to draw an imaginary picture of one such man during a few days of the year …  And although my picture is frankly imaginary, it is based on a wealth of definite evidence and backed up by an almost equal wealth of suggestions and hints, none of them in themselves clear or weighty enough, perhaps, to be vouched as evidence, but, nevertheless, possessed of a cumulative power which could not be denied.

Bennett then proceeded to write his fictional account about his fictional peasant. In so doing, he was careful not to deceive his readers. The prologue was quite separate from the main part of his book, and Bennett clearly flagged that the prologue was fiction. Readers knew where the fiction started and where it ended, and where the history began—in chapter one. By including a fictional prologue in his book, Bennett enabled his readers to get a feel for what life was like for a peasant in an English village in 1320, unencumbered by the caveats and doubts which an historian must often express when writing history.

Bennett was a great historian.

In 1981 Peter Read wrote a booklet, The Stolen Generations. In his booklet, and under the heading “A Typical Case”, Read wrote:

The following story is a composite one, the details taken from the case histories of a number of families. Suppose that, in 1950, a family containing seven children was living on a reserve, when it was learned that an Inspector of the Aborigines Protection Board was to pay a visit. Both the children and parents knew from past experience that they might have to fight for the right to stay together. What they did not know was that their names were already on the Inspector’s blacklist, as a family whose lifestyle did not match the manager’s opinion of how Aboriginal families ought to live. Nor did they know that a magistrate’s committal hearing was scheduled for the following week, nor that the local police had already been asked to prepare a charge sheet for each of the children, as “neglected and under incompetent guardianship”. Nor did they know that, far away in Cootamundra and Kempsey, the superintendents had been warned to prepare places for several more children …

And on it goes, for another five paragraphs, concluding with:

The family is imaginary, but every one of the details happened to one or more individuals. Yet the policy which allowed such events to take place was proposed, debated and affirmed in the Parliament of the State of New South Wales, and for fifty years was sanctioned and administered by the Aborigines Protection (later Welfare) Board.

But, of course, Read’s “typical case” was not a typical case at all; it was fiction concocted by amalgamating an unquantified number of unnamed and unfootnoted real cases. A true “typical case” is readily obtainable from the relevant records and accurately represents the majority of individual cases contained in those records; otherwise, the case is not typical. Read concocted a fictitious case because he was unable to find any instance of the removal of an Aboriginal child which would illustrate the full range of his indictments against governments for removing some Aboriginal children from their families.

Whereas Bennett made plain to his readers what he was doing, Read placed his fiction in the body of his work, and falsely described it as a typical case.

In 2002 the Commonwealth Parliamentary Library published a Current Issues Brief, Defining Aboriginality in Australia. At one point the brief quoted from an unpublished paper by Peter Read, delivered at an Aboriginal citizenship conference at the Australian National University in 1996:

It is a moving story. The problem with the story is that it is fictitious. The Parliamentary Library flagged this problem when introducing the story: “To illustrate the inconsistencies the historian Peter Read, drawing on documented sources, has offered the following conflation …”

In 2002 Read wrote an article for the journal Aboriginal History. The article discussed, among other things, legal proceedings brought by Joy Williams against the New South Wales government arising from her removal as a young child from her mother. The court at first instance, and also the appeal court, found against Williams. Among other evidence, the government’s lawyers were able to produce documentary evidence showing that Joy’s mother had consented to her child’s removal to a children’s home. Read, however, asked his readers to “consider this alternative scenario”:

April 1942. Irene English, the [Aborigines Welfare] Board’s senior child welfare officer, and responsible for the placements of the girls after they leave foster or institutional care, is telephoned at her Sydney office by the lady of the North Sydney home where Doretta Williams lives and works. She tells English that she had wondered about Doretta’s absence for most of New Year’s Eve and had been keeping an eye on her. In the last four weeks Doretta had been tired and withdrawn. Yes, she was almost certain: Doretta was beginning to show. So she had sat her down and demanded to know whether or not she was pregnant. At first Doretta had said no, then she said that she didn’t know, then she began to cry; then she admitted that she had been with a soldier whose name she did not know, and that yes, she was pregnant.

Several days later Irene English takes the 25 minute journey by train and foot to North Sydney. Doretta is called. Two cane chairs face each other on the verandah looking down towards the Harbour. Doretta is allowed—for Mrs English is a kindly woman—to sit down. English begins:

Well Doretta, this is a terrible day for both of us. I can’t imagine how it happened, when I consider all the advantages that have been put your way. You were taken away from your people at Cowra, we looked after you at Cootamundra, we gave you a good education, we gave you a fine job in the city. How you’ve let us down. How you’ve let down Mr Pettitt, I can’t think what he will say. What will Matron think of you now? And your friends. And most of all you’ve let yourself down in a moment of weakness. I hope you are as ashamed of yourself as I am of you.

Mrs English notices that Doretta, head bowed, is sobbing. She turns to stare at the aching blue of the harbour and returns her gaze to the weeping child.

You know that you won’t be able to keep your baby, don’t you? Mr Pettitt wouldn’t think of it. You wouldn’t be able to keep on working, and you would not be able to look after it. I think the best thing is for me to contact the Matron of Crown Street, arrange for you to go in there when it’s time, and have your baby cared for. I’ll make sure that it goes to a good home. That’s the best I can do for you, and really it’s for the best. And we’ll find you a new job straight away. You’ll be leaving here tomorrow.

I cannot say, of course, that the separation of Joy Williams from her mother was arranged like this, but my knowledge of Aboriginal history, based on conducting hundred[s] of interviews and reading hundreds of files, suggests that it is probable.

Let us pause here for a moment and absorb fully what Read is saying. He is saying that, because he is an historian who has conducted a lot of research about Aboriginal child removal, he is competent to make up “facts” about the removal of a particular child.

That is not history.

In his article for Aboriginal History, Read also discussed the Stolen Generations test case, Cubillo v Commonwealth. Counsel for Lorna Cubillo asked Read to “provide an affidavit setting the historical context both of separation of Aboriginal children and of the Northern Territory generally”. To assist Read, Cubillo’s legal team handed him about 3000 documents. Read set about writing his affidavit. When he was satisfied that his affidavit provided “very strong evidence that there was a policy of removal of as many part-Aboriginal children as possible from their communities, and for many other motivations beside the perceived good of the child”, he sent the document to the legal team. They all but rejected it. They did not like Read’s use of the word “argument”. “‘It is for us to argue’, I [Read] was told, ‘and for you to provide the historical facts.’”

As the court case unfolded, Cubillo’s counsel chose not to use Read’s affidavit. Read was miffed:

I received no credible explanation to my queries about why my affidavit had not been presented and why I had not been called. Some weeks later, after persistent enquiries, I learned that the affidavit was “not considered good enough”. I strongly resented this explanation, but many phone calls and several letters to the principal of the firm evinced no further response.

Read did not seem to appreciate that, while it is sometimes legitimate when writing history to create an imaginary incident or series of incidents (and make it clear to your readers that that is what you are doing), in a court of law, where everything you say can be cross-examined, using your imagination is not a virtue.

In his article, when discussing Cubillo’s removal, Read wrote: “Lorna Cubillo was removed in 1942 from an officially-recognised ‘native camp’ near Tennant Creek and taken to the Baptist-sponsored United Aborigines Mission Home in Darwin.” In this one sentence Read committed three howlers.

One can sympathise with Cubillo’s legal team when it chose not to use Read’s “history”.

Doug Brown is a retired New South Wales public servant. He contributed the article “Imprisonment Achieves More Than You Think” in the March issue

2 thoughts on “The Fictional History of Peter Read”

Why Alice Can’t Get Ahead

Why Another Stolen Generation Claim Has Failed in Court

The Cultural Roots of Aboriginal Violence