Old Macdonald Had a Wind Farm 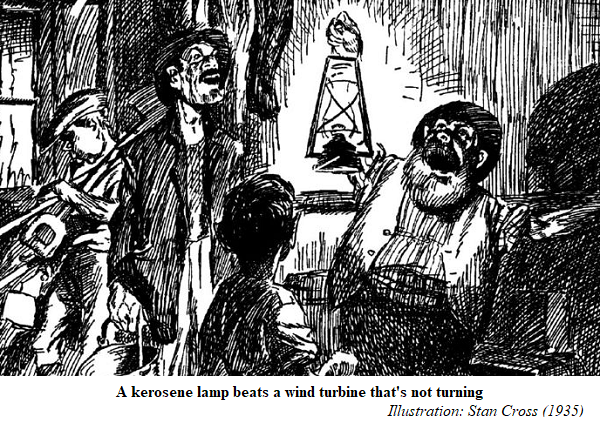 Macdonald “Bluey” Grumble pushed his antique felt hat back from his forehead and gazed across his acres with a weather-worn frown. “It don’t look like stoppin’,” he observed to his son Dave. “At this rate every paddock’ll be flooded by the end of the week. Nothin’ll grow and we’ll be stuffed.”

“Jeez, Dad,” said Dave. “That’s no good. It might be too wet for footy on Saturday.”

“You’ll probably have a couple of Corriedales swimming round the goalposts. I’ve always said yer can’t trust them smart-aleck city bastards with their forecasts. What’s the name of that galah that used to be always on the wireless saying it would never rain again? Haven’t heard much from him lately.”

“I don’t remember, Dad. Was it Eddie McGuire?”

“No, yer drongo. Slattery, Flattery, something like that. He started it all and them global warming peanuts in Canberra have been harping on it ever since. We’re all going to die of thirst in a drought, they say. Drown more likely. The wheat’s been washed away. And the farm-stay bungalow looks like lifting clear of its slab and floating off. Just as well that family paid up before they left last week. Them second-hand beds and the couch we got from the Vinnies—ruined.”

Bluey inspected his thin bony hands, like those of the old shearer in the song. “The way things are going we might as well clear out too. Miss out on a payment and the bank’ll take the farm quicker than if it was a Koorie land claim.” He raised his voice above a chorus of shrieking and cackling. “Them cockatoos will have the place to themselves.”

“Yer’ve said we was finished before, Dad. Lots of times. But why don’t we grow somethink the rain won’t damage? Why don’t we whatchamacallit—I saw it in the Weekly Times—why don’t we diversify?”

“Into what? Turn the farm-stay into a houseboat?”

“No, Dad, into somethink—what’s that word young Nipper was saying his teacher’s always ramming down their throats at school?—sustainable. Something that’ll resist the extreme weather events that guy on TV said we can now expect. I remember his name now. Faggetty. He was raving on about the need for sustainability.”

“If yer arst me that character should spend less of his time shaking hands with Mrs Palmer and her five daughters.”

“Dad, remember that other bloke you said was a bullshit artist? The one from the Green party that had that meeting in the Mechanics’ Hall? It was written up in the Bugle, there was only a man and a dog there. He was goin’ on about some type of farm he reckoned is all the rage. You don’t have to grow things like we do. And you get commission, he says, someone pays you. He said they’re all over the place and they’re so important to our future they’re putting hundreds of them in the national park on top of Mount Picturesque.”

“Yer mean wingmill farms, son. Them things have been round for donkey’s years but you’d have to be seen coming to invest in them. Wouldn’t touch them with a bargepole. Never understood why there’s such a song and dance about having so many wingmills all lined up together.” He pointed a finger towards the window where a distant skeletal form, like a piece of civic art in an outer suburban shopping plaza, could be descried through the grey-green rainy haze. “What can they do that our old tin Trewhella out there hasn’t been doing since cocky was an egg? Why would youse want all that paraphernalia cluttering up the place just to keep a couple of dams filled in summer? Those new hurdy-gurdies just take up good land for nothing and they’d be a sink for money just keeping the rust off.”

He paused to blow his nose elaborately. The avalanche of sound might have made a passing stranger wonder whether a quarry face was being blasted in the farmhouse. “They’re not even owned by Australians,” he added, with the air of making an irrefutable point. “The Chinks own them I was told and yer have to pay rent.”

“But you can sell the wind they generate for helectricity,” came a voice from offstage, wafted in on a warm aroma of Anzac biscuits. “You hear them talking about it on Neil Mitchell. Prince Charles thinks they’re going to save the planet.”

Bluey walked into the kitchen. “If youse and Prince Charles think that, Gwen, you’re away with the fairies. Yer can’t sell wind, you get it free.”

“Well that’s not what they said at the information day and free community barbecue I did the sausage rolls for and you wouldn’t go to.”

“Had the crutchin’ to do—anyhow, why don’t you do something useful now”—this despite the industrial-scale activity in the kitchen, with trays of cakes and scones stacked on each other for the CWA show—“and make us a cuppa.”

“But the commission, Dad. It was in the Bugle.”

Bluey extracted the local newspaper from beneath the dogs’ dishes and sceptically positioned his specs, his reading ones with the band-aid across the bridge, onto his gnarled nose.

His lips moved silently as he ran his gaze down the columns. All at once he exclaimed, “Hold yer horses, hang on. Gwen, you’re not just a pretty face, you’re right. I’ve been labouring under a what d’you call it—them things are not for pumping water into the dam. It says in the paper they’re for generating helectricity cleanly. I s’pose that means they don’t make a mess with a lot of muck lying round afterwards. The whirligigs that do the generating, it says here, ‘constitute a viable income stream for the person on the land’. That must mean when it’s translated that they’re a substitute for crops and livestock. Blimey. And the government’s so keen on them it pays farmers to put them up on their property.

“Have a dekko at this. ‘According to the Australian Energy Infrastructure Commissioner,’ whoever he is when he’s at home, ‘the fees earned by farmers for hosting a turbine’—that’s the Chink hurdy-gurdies—‘could be in the range of $250,000 to’—shit a brick—‘$625,000, depending on capacity and length of operations.’ See if the party line’s clear, Gwen, an’ if it’s not tell ’em to can it. I’m going to get that energy brass hat on the blower.”

And so it was decided. Grumble’s five-hundred-acre paddock would be the site for a wind farm. A week later a representative of the Beautiful Wind Clean Energy Company arrived at Bluey’s front door. To Bluey’s surprise he wasn’t Chinese and looked more like the head teacher at Nipper’s school. While being regaled with tea and passionfruit sponge in the kitchen, the representative, who said his name was Mr Bandt—“but just call me Adam”—produced the necessary documents. “There’s just a small non-recurrent charge towards our installation costs,” he said, “but we don’t ask you to pay upfront. We deduct it from your first commission. You’ll hardly notice.”

Soon after, semi-trailers carrying the giant gawky turbines, so reminiscent of the alien invaders’ towers in The War of the Worlds, were churning up the mud as they delivered their burden. Several got bogged and had to be winched free by helicopter. One knocked over the roadside mailbox, sending letters and leaflets of supermarket specials and cut-price farm machinery swirling down a rut in a wodge of papier mâché towards the swollen creek. But the rain began to ease, and before long the newly green paddocks were sprouting their crop of white towers with enormous rotating blades.

Except that they were rotating very slowly. “It’s awful still,” said Dave, looking up. “There’s not much wind.”

There was just enough to turn the blades almost imperceptibly so that they made a faint eerie whistling sound from on high, like a kettle on a low heat. Suddenly, this was punctuated by a thump from one of the blades and something white and red and squishy landed on Dave’s upturned head. “Strewth, it’s a cockatoo,” he cried, passing his sleeve across his face to wipe away the gore that had seeped from the avian remains. “It’s dead, it looks as though it’s been chopped up. And there’s another over there. And what’s that, a crow without a head? Yuk, it’s disgusting.”

A few months later Mr Bandt from the energy company called again at the farm. His manner was less ingratiating than before. “We had hoped for better results than this,” he said, pushing an official-looking document across the kitchen table. “There’s a statement of your business activity to date. I’m afraid your generation quota has not been met. Head office thinks we shall have to revise our assessment of atmospheric vental capacity in this district. Our anemometric modelling might have been misleading.”

“Where’s me cheque for the helectricity?” asked Mr Grumble through a mouthful of scone, spraying the statement with crumbs.

“That’s what I need to explain to you,” said the company official. “The poor result means we are unable to pay a commission. In fact your installation fee exceeds the small amount of energy-generated income. Your account actually has a negative balance and you will have to pay us rather than the other way round.”

The farmer’s cordiality congealed. He got up from the table and stretched a long arm into the broom cupboard for his shotgun, the one he had prudently not handed over during the amnesty years before. “Dave!” he called.

Dave came in trailing clouds of feathers. He had been watching the turbines and was covered as usual with the remains of birds unfortunate enough to have flown into the vast blades. Mr Bandt clutched his briefcase to his chest and backed away, colliding with the dresser and sending serried ranks of Gwen’s jams and chutneys cascading to the floor. The accident gave Mr Grumble an idea.

“Smear him with the jam, Dave,” the old farmer commanded, “It’ll be just as good as tar and I’ll stick on the feathers. I’ll teach him negative balance. Watch for the broken glass, we don’t want to be had up for bodily harm.”

They pushed the squawking and now feathered functionary out the door, surprising Dave’s playful younger brother Nipper in the act of letting down the tyres of the Beautiful Wind Clean Energy Company’s HiLux, its side boldly emblazoned with the legend “All our deliveries are carbon neutral” (the company’s electric Prius van, because of the cost of maintenance and charging, was kept permanently parked outside its offices for virtuous effect).

For once Mr Grumble seemed to be looking on the bright side. “Them things may be ratshit for helectricity but they have sure got rid of our cocky problem,” he said. “And I reckon they could bring us in a regular harvest of feathers. Cocky feathers are nice and soft. Maybe we could sell them to some manufackterer for cushions and pillows.”

“And for feather doonas, Dad, like Mabel was looking at in the Homemaker catalogue. And the bits of bird we could sell to a cat’s meat company. There’s enough out there for millions of tins. Unless yer think the Hoo Flung café in town …”

Christopher Akehurst lives in country Victoria. He wrote on the spread of wind turbines across the Shire of Moorabool in the November 2019 issue

The Ruinous Privileges of Renewable Energy