From Class War to Race War 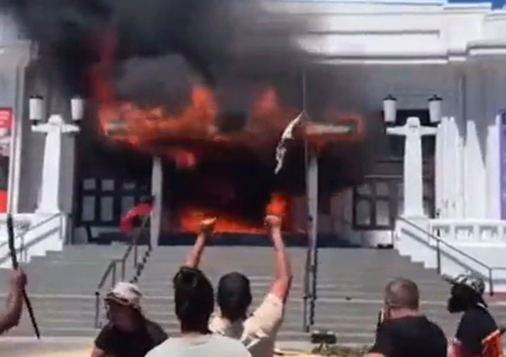 During the past forty years or so, a major transformation has occurred on the far Left, both in Australia and internationally, which might be characterised in one sentence as the replacement of Class War by Race War as the primary vehicle of the Left’s attempts to destroy existing society. This change has been evident in many ways, and appears to be ubiquitous around the world.

One might begin by looking at the rise and fall of left-wing critiques of Australian history, by well-known Australian historians, as a clear-cut example of this process. From the 1930s until the 1990s or later Australia had a significant volume of important works by avowedly left-wing historians, which focused on the plight of Australia’s working classes, urban and rural, and their alleged exploitation by the British-oriented upper classes. Probably the doyen of this school was Brian Fitzpatrick, whose British Imperialism and Australia, 1783–1833 (1939) was followed by his The British Empire in Australia: An Economic History, 1834–1939 (1941) and A Short History of the Australian Labor Movement (1941; revised edition 1944). Also very influential was Russel Ward’s The Australian Legend (1958), which argued that the Australian national character was formed by bush egalitarianism. Probably the best-known Australian historian, Manning Clark—a highly complex man, originally seen as a conservative—became a champion of the Left and an enemy of “the Old Dead Tree” (as he put it) of empire loyalism.

The long list of recent prominent left-wing Australian historians includes Stuart Macintyre, Robert Hughes, Verity Bergmann, Marilyn Lake and many others. Some of them, especially before Soviet de-Stalinisation, were members of the Communist Party, for example Russel Ward from 1941 until 1949; most were active members of other left-wing groups. What all had in common was the belief that the Australian working classes, democratic and egalitarian, represented the central thrust of Australian history, and would eventually be victorious. They all but ignored the Aborigines (and, until the 1970s, women) as a separate component of the population with their own historical trajectory and exploited in different ways.

It would be an exaggeration to claim that this kind of radical Marxist or semi-Marxist history, centring on the Australian working classes, has disappeared without trace during the past thirty years or so, but it is no longer central or frequently encountered. It has been replaced on the Left by something else entirely, the centrality of the alleged dispossession of Australia’s Aborigines by the white man as the main subject matter of radical history, marginalising or ignoring the previous focus on the centrality of the working classes. This change has also transformed the mainstream view of Australia’s pastoral pioneers from benefactors of the nation, who brought prosperity to a continent, to genocidal mass murderers and entrenched incorrigible racists. This historical reinterpretation began with such historians as Henry Reynolds in The Other Side of the Frontier (1981) and This Whispering in Our Hearts (1998) and has continued with works by Bill Gammage in The Biggest Estate on Earth: How the Aborigines Made Australia (2011), Richard Broome in Aboriginal Australia: Black Resistance to White Dominance, 1788–1980 (1982) and in Bruce Pascoe’s highly dubious Dark Emu (2014).

Unlike the previous views of the Australian Left, the current radical orthodoxy has attained almost ubiquitous official status, endorsed in such works as Bringing Them Home (1997) on the alleged “stolen generations” and in countless verbal acknowledgments, at public meetings and in documents of every kind, of the “traditional owners” of the land and of the Aboriginal “elders, past, present and emerging”, oblivious to the real nature of pre-contact Aboriginal society, with its horrifying and barbaric record of infanticide (about 35 per cent of Aboriginal babies were murdered at birth), cannibalism, the gross and ubiquitous mistreatment of women, tribal warfare, and its total failure in 50,000 years to produce a written language, permanent settlements, or a viable agriculture with a food surplus. This focus on the alleged merits of pre-contact Aboriginal society is almost always accompanied by the denigration of white settlers as mass murderers who carried out massacres and genocides.

It is difficult to avoid the conclusion that this viewpoint is not so much designed to highlight the plight of the Aborigines as to undermine and destroy support for Australian democracy and the successful society which has been developed here since 1788, in a manner very similar to that of yesterday’s Marxist radicalism. Needless to say, most of this intellectual warfare has been promulgated by well-paid academics and other professionals who would not remain alive for two weeks if they were forced to live in the actual lifestyle of pre-contact Aborigines. This current orthodoxy has been contested by some conservative Australian historians such as Keith Windschuttle and Geoffrey Blainey, who have unfortunately been unable to disturb its academic and political hegemony.

An interesting and telling example of the preposterous nature of the current love affair with Aboriginal society can be found in the May 2022 issue of ANU Matters, an online journal sent to alumni of the Australian National University. In its section celebrating “National Reconciliation Week (27 May–3 June)” it includes an online clip spoken by Paul Duldig, the University’s Chief Operating Officer, “respecting, celebrating, and learning from First Nations Peoples”. In August, Mr Duldig will take up a new post as Chief Executive of the State Library of Victoria in Melbourne, the fourth-most-visited library in the world, whose collections include 2.5 million books and periodicals. Apparently this praise being heaped on the Aborigines has not been seen as ironical, given that Australia’s “First Nations Peoples” failed to produce any form of writing or literacy, or a single book of any kind, in 50,000 years.

Much the same transformation has also occurred in Britain, but with a somewhat different pattern of development. The 1960s (in particular) radical attacks on the British establishment and its alleged exploitation of the British working classes took centre stage in British historiography. Such well-known works as E.P. Thompson’s The Making of the English Working Class (1963), Eric Hobsbawm’s Labouring Men (1964) and Captain Swing (1969, with George Rudé), and the works of John Saville, Christopher Hill and Raphael Samuel, among many others, appeared at that time or soon after. At the time of his death in 2012, Hobsbawm was generally regarded as the most famous historian in the world, while in 2011 a poll in History Today magazine voted Thompson the second-most important historian of the previous fifty years, behind only the French historian Fernand Braudel. Nearly all members of this school were not merely Marxists but, at least at one time, members of the British Communist Party. And just as in Australia, the great visibility of this group has been replaced by an entirely separate collection of historians who concentrate on the alleged evils of the British Empire, slavery, of British imperialism and racism and, in particular, on the history of black people in Britain, whose numbers were infinitesimally tiny until the 1950s. Along with these historians there has also emerged a vastly larger group of feminist historians, in Britain and in the rest of the world, almost invariably on the Left but who, to be sure, add an often useful corrective to previous male-oriented histories.

One major reason for the ubiquity and success of Aboriginal history in Australia is, paradoxically, because it does not seem to threaten middle-class white Australia, being chiefly concerned with redress for the alleged wrongs done to Aborigines in remote areas far from our capital cities. In this, it differs markedly from the implicit agenda of the previous generation of Marxist historians, whose program called for radical changes in the nature of Australian society. It is probably not well remembered today how close to sweeping success radical schemes of nationalisation came in the 1940s and earlier. In 1947, for instance, the Chifley ALP government passed the Banking Act 1947, which actually nationalised all of Australia’s banks, whose shares were compulsorily sold to the (then publicly owned) Commonwealth Bank, controlled by the federal government. This legislation was overturned in 1948 by the High Court of Australia in the Bank Nationalisation Case. Nationalisation on this scale, with all that it implies about state control of the economy, seems all but inconceivable today, but it was then a major part of the Left’s agenda, of which the radical historiography of Australia was an intellectual component.

Although seemingly irrelevant to the lives of most ordinary Australians, the potential impact of today’s Race Wars should not be underestimated. The potential for division and harm can be seen today in New Zealand, where, according to an article by Karl du Fresne in the Spectator Australia of April 16, “New Zealand’s Cultural Upheaval”, under Jacinda Ardern a virtual revolution has occurred:

The resulting upheaval isn’t measurable so much by legislative change as by a profound shift in the political and cultural tone of the country. Ardern’s re-election was like an injection of steroids for the leftist cabal that now exerts control over all New Zealand’s institutions of power and influence, including the media and the craven business sector … There are effectively two levels of citizenship in New Zealand, one of which confers entitlements not available to the other. This is evident across a range of public policies that include compulsory Maori representation on local councils, the appointment of Maori activists to positions of power and the splurging of vast sums of money targeted exclusively at people who happen, by what is effectively a genetic accident, to have a proportion of Maori blood. All of this is predicated on the notion that people of part-Maori descent are entitled to redress for the baneful effects of colonisation. These deleterious effects presumably included the introduction of democratic government, the rule of law and the end of cannibalism, slavery and tribal warfare.

Sound familiar? What happened there can happen here, and the intellectual stage-setters for this outcome are already in place.

William D. Rubinstein held chairs of history at Deakin University and at the University of Wales, and is a frequent contributor to Quadrant.

Latest News of the Progress Wars

The Politics of the Abbott Government