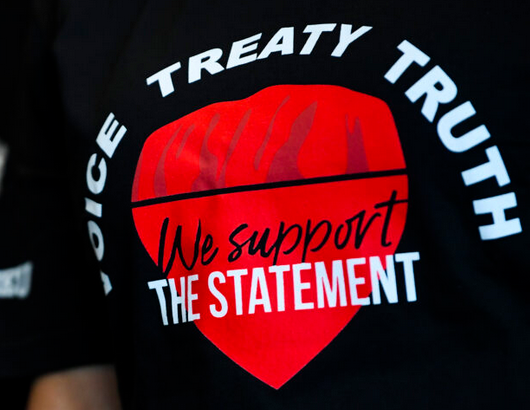 When British explorer James Cook and the crew of his H.M.B. Endeavour first landed in southeastern Australia in 1770, they stole 40 spears from the region’s Gweagal people. It was the opening salvo of Britain’s brutal colonization of the continent, and for the next 250 years, some of the spoils of the expedition remained housed at the University of Cambridge in England, more than 10,000 miles away from Australia. Earlier this month, three of the four surviving spears finally returned home—at least temporarily. In a move hailed as a historic reunion, the weapons are being displayed next to 37 contemporary Indigenous spears at the University of Sydney’s Chau Chak Wing Museum.

Sometimes this column just writes itself.

Back in Australia, actual Gweagal people seem more relaxed about Speargate than are their international champions. The chairwoman of the local La Perouse Aboriginal Land Council frankly acknowledged that “had these spears not been collected and taken to the UK, they likely wouldn’t exist today”. She would ultimately like to see the spears (and other first-contact artefacts) displayed “on country”, but understands that this would first require the building of an appropriate exhibition space. The Gujaga Foundation, a cultural association led by members of the La Perouse Aboriginal community, is similarly pragmatic. Its chairman agreed that if the spears hadn’t been “held in a museum-grade facility, we wouldn’t be able to look at them today”. He added that the Foundation would be “happy to send them back and then start to have those conversations around when they’re to come back here on a longer term basis”.

Surely there’s a deal here just waiting to be discovered. The La Perouse community could exchange thirty-seven new spears for two of the old ones. Cambridge apparently held one spear back for safe keeping, so sending one back and splitting the difference would tie the score at Gweagal 2, England 2. What possible advantage could the Cambridge Museum of Archaeology and Anthropology gain from having four spears instead of two? Just think of all the virtue that would be signalled by a return. Good press never came so cheap. As for the future, the chairwoman of the La Perouse Land Council wants people to know that Gweagal spear-making “is a continuing practice, that there are still spear-makers in our community”. That raises the prospect of a new arms export industry for Sydney’s south, with Aboriginal entrepreneurs hand-crafting spears for the Cambridge museum gift shop, where they would doubtless fetch a premium price. La Perouse: if you’re listening, the idea is yours for the taking. Quadrant promises not to ask for it back for at least 250 years.

No one shows so much good sense on Aboriginal issues as do actual Aboriginal Australians. And not only on Aboriginal issues. Before the plague, Sydney needed a second cruise ship terminal to accommodate the booming tourist trade. The Commonwealth plans to put it in Yarra Bay, affording arriving passengers stunning views of the airport, the container terminal and La Perouse from the top deck of their sixteen-storey mobile pleasure palaces. Wary of having their home country turned into a transport hub for the fifty to seventy buses that would meet every ship, the La Perouse Land Council very sensibly thought that tourists might prefer to arrive with a view of the Harbour Bridge and disembark directly into the cafe culture of Potts Point. Selflessly offering to forgo the prospect of corralling cashed-up cruise passengers into an on-country spear museum, the council opted for historic preservation over commercial gain. With Clover Moore, real estate developers, and sheer logic on their side (a rare coalition indeed), there was only one problem: the Navy.

The Royal Navy has been based at Garden Island since before it acquired “Australian” as a middle name, and it plans to stay long after it drops “Royal” as its first. Its officers own apartments all over Potts Point, their dress uniforms adding a continental grandeur to the sophisticated boulevard of Macleay Street on their early morning walks to work. Its enlisted personnel enjoy subsidised housing in one of the most expensive suburbs in the world, with glorious Harbour views—and on-site parking. Kings Cross nightclubs are conveniently within staggering distance, and the annual Gay & Lesbian Mardi Gras fills the streets with rainbows. Potts Point is one of the few places left in inner Sydney where people still love a man in a uniform. Garden Island may be a thousand miles south of any conceivable maritime threat to Australia, but it’s conveniently close to the action.

A posting to Potts Point sure beats being sent to the gulag archipelago of Australia’s top end, and the Navy (motto: To fight and win at sea) is accordingly loath to leave its Sydney home. Thus it maintains a major military-industrial operation squat in the middle of a tourist harbour full of sailboats, party boats, ferries, and (yes) cruise ships. Safety first. That’s actually what the Navy said when approached about the possibility of sharing Garden Island with a new cruise terminal. The idea that they might move to Gladstone or Townsville instead never crossed their minds. Actual fighting navies have long since abandoned historic city-centre bases for far-flung industrial harbours with expansive security perimeters. Not the RAN. It has a parade to march in. Not that it does much marching these days. In 2021, it traded dress uniforms for “white or purple T-shirts” and went with “walking and waving instead of marching”. Nonetheless, the RAN was proud that “the hours of practice we all put in showed, with unbelievable coordination in presenting symbolic rainbow wreaths”. Fight and win!

SYDNEY may be a global city, but the great thing about New South Wales’s 120 local Aboriginal land councils is that they’re local. They’re also Aboriginal, which is more than you can say for many indigenous advocates. Last year, the Darkinjung Land Council referred the University of Sydney to the Independent Commission Against Corruption over its failure to check the credentials of its self-identified indigenous academics. The council argued that the university’s indigenous set-asides should go instead to “legitimate Aboriginal people who have experienced dispossession and disadvantage due to racism, not for people who have not experienced these and who have generally lived a life of advantage and wealth”. Unlike New South Wales universities, New South Wales land councils have a strict statutory test for indigeneity: prospective members not only have to identify as indigenous, but also document their descent. They have to live on country, or own property there, or otherwise maintain strong enough connections to be accepted by the people who do. Sorry, Bruce.

New South Wales may not have an indigenous voice to parliament, but in the land councils it has 120 independent indigenous voices to parliament. Free from government funding (and government control), Aboriginal land councils maintain their own membership rolls, and you have to show up to meetings in order to keep your vote. The government provided seed funding and mandates that the councils operate democratically; otherwise, it’s hands-off, and the land councils have been self-supporting since 1998. They raise their own money and set their own priorities. Most are more concerned about improving the lives of their members than with political posturing, virtue signalling, or finding plush government jobs in Canberra. Free from postcolonial preconceptions, the La Perouse Land Council’s headline cultural project is restoring a historic church. A Christian church.

Australia is a democratic country, and indigenous Australians should have a voice in it. In New South Wales, they already do. Like the union voice, the Catholic voice, the Jewish voice, the Muslim voice, the business voice, the doctors’ voice, the LGBT+ voice, and all the other voices, the New South Wales indigenous voice operates through formal, transparent, democratically-constituted membership organisations. In many ways, the indigenous voice is better-governed than any of the others; it truly represents the organised will of its constituents. In Canberra, legions of indigenous rights activists claim to speak for Aboriginal and Torres Strait Islander people, on the theory that they can’t speak for themselves. That’s the theory on which communists claim to speak for world’s workers, and the Greens claim to speak for the Earth itself. It’s a theory that has no place in a democratic constitution. It smacks of Victoria, or worse, New Zealand. If Australia wants to keep its democracy democratic, it should listen to its many indigenous voices, not drown them in an Indigenous Voice.