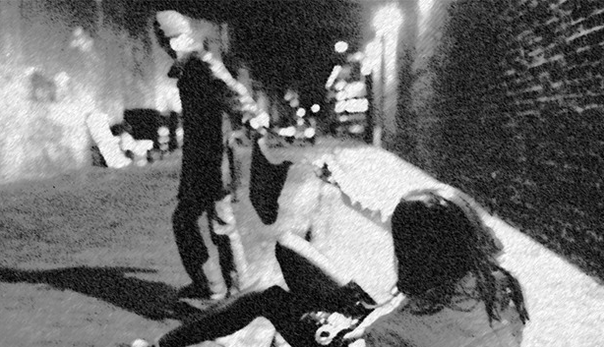 “Young people in this city,” a native New Yorker said to me last week, “don’t even know what mugger money is.”

He went on to explain. Mugger money was the small wad of bills most New Yorkers would carry around with them between the mayoral administrations of John V. Lindsay (1966–1973) and David N. Dinkins (1990–1993).

Mugger money was what you kept with you because you expected to be mugged eventually and you needed something to hand over to placate the attacker and persuade him not to kill you. It was kept separately from your actual money in your actual wallet—my friend told me that some more theatrical friends of his would keep their mugger money in a dressed-up fake wallet—and you’d toss it to the mugger and then make a run for it.

The criminal would get some cash and the victim would keep the bulk of his money, along with his identification—a bureaucratic nightmare to replace—and his credit cards. It was, as progressive social scientists might say, a win-win. It was the tax you paid for living in the crime-infested City That Never Sleeps.

We’ve all seen the movies. The juvenile delinquents of West Side Story became the lowlifes of Midnight Cowboy and the psychopaths of Taxi Driver. Police corruption was documented in Serpico. When a subway car is hijacked in The Taking of Pelham One Two Three and the passengers are ransomed for $1 million, a subway official shrugs with indifference, “What do they want for their lousy thirty-five cents? To live forever?” That pretty much summed up New York between 1965 and 1990.

And those are just the movies. In lurid Technicolor real life, there were race riots in Brooklyn, gang rapes in Central Park, streetwalking prostitution along Third Avenue in midtown Manhattan, and mob hits outside steakhouses and Little Italy cafes. In the windows of nearly every parked car in the city was a handwritten sign, addressed to petty thieves and drug addicts looking for a quick score: No Radio in Car.

A friend of mine remembers growing up on the Upper West Side of Manhattan—now one of the swankiest quarters of the city—during the early 1970s, a time when the neighbourhood was terrorised by a sex criminal who castrated young boys. “Charlie Chop-Off,” the neighbourhood kids called him, as in: “Keep an eye out for Charlie Chop-Off when you’re playing in the park.” The kids still played in Riverside Park and freely roamed the neighbourhood, as was usual back then. The presence of a psychopath was something they and their parents took in stride, just another gruesome reminder that things were sliding inexorably into chaos.

Keep your eyes peeled, they said to each other, because no one expected the police to be effective. And they weren’t: the case is still unsolved.

Crime just is, New Yorkers told themselves for nearly forty years. Put a sign in your car, keep an eye out for Charlie Chop-Off, and get your mugger money ready. You’re on your own.

Such was the unbroken descent of the city into criminal madness that it was possible, by the end of the David N. Dinkins administration, to be a third-generation carrier of mugger money, having learned at the knee of your elders how meekly to adjust to the rising crime rate and mitigate its threats. The idea that crime could go down, that the city could become safer and better policed, was dismissed as naive and maybe just a little bit racist. Progressive social scientists insisted that crime had a root cause—systemic racism, unchecked capitalism, whatever—and that as long as the underlying evils were unaddressed, we all needed to keep our mugger money handy.

But violent crime in New York only rose in an unbroken line from the 1960s to the 1990s, when it abruptly stopped and began to decline. The person often credited with this transformation was Mayor Rudy Giuliani, who took office in 1994 and spent his years in office reforming the police force, cracking down on petty crime, expanding street patrols, and, if you’re inclined to see it this way, violating the civil rights of certain individuals a tiny bit here and there.

I am not inclined to see it this way, but neither am I inclined to give Giuliani all of the credit. It was a combination of his tough-guy reforms, demographics, massive city budget surpluses, and the momentum effect of social change. Once crime began to dip a bit—once the subways seemed safer and street crime went down—New Yorkers realised that the city wasn’t doomed to be an unpoliced circus of crime. A glimpse of a better city was all they needed to give Giuliani the political muscle to clean up the streets and finish the job.

It almost doesn’t matter why it happened. The most astonishing thing was that it was possible at all. By the time Michael Bloomberg took over as mayor, New York City was among the safest cities in the world, with one of the lowest murder rates of any city in the country. Times Square was a glittering centre for family-friendly entertainment, parks and squares across the city were enlivened with cafes and Paris-style street furniture, the subways were nearly entirely free of graffiti, and Alphabet City—once an open-air drug marketplace—had not one but three Starbucks.

EVERYBODY knows the next act of this particular play. In 2020, after a relentless series of police brutality cases such as George Floyd in Minneapolis and Amadou Diallo in New York, cities across the country exploded in violent demonstrations and riots. Shops were looted, fires were set, and the city seemed to reel backwards into the squalor of the 1970s. In New York City, in the office of left-wing Mayor Bill DiBlasio and in the pages of the New York Times, the New York Police Department was seen as the problem, not the solution. The new battle cry of the progressive social scientist was Defund the Police!

Why do we even need a police force? editorialists and academics asked. A huge portion of police calls are for family disputes and domestic disturbances. If that’s the case, can’t we make do with a smaller cadre of armed police and a newly-organised corps of professional mediators and family therapists? And for that matter, do the police need to be armed at all? And also: why are cops hassling homeless people and small-time drug dealers? Maybe, in view of the recent cases of deadly force and racially-motivated police misconduct, cops should take a step back and stand down.

It wasn’t just mugger money people had forgotten. They had forgotten how bad the city could get. Life, unfortunately, has a way of delivering sharply painful reminders.

Michelle Alyssa Go, a forty-year-old Manhattan resident, was waiting for the uptown Q train at the 42nd Street subway station on Saturday, January 15, when a deranged man pushed her in front of an oncoming train. She died on the scene. Her killer had been in and out of jail several times and had a history of violent behaviour. Chief of Transit Police Kathleen M. O’Reilly said there were six police officers assigned within that station and on the trains but, “unfortunately, these instances do occur but they are rare but this one is very harrowing and disturbing and it was unpreventable by our officers”. In other words, what do they want for their lousy (adjusted for inflation) $2.75? To live forever?

Christina Lee, a twenty-five-year-old music producer, was followed home late Sunday, February 13, by another madman, who forced himself into her apartment and stabbed her to death. Her killer had been arrested eight times since last May, on a variety of charges including assault, theft and damage to property. The newly elected mayor, Eric Adams, declared that “we won’t let this violence go unchecked”, but then added for any progressive social scientists who might be listening, “while the suspect who committed this heinous act is now in custody, the conditions that created him remain”. He didn’t specify which conditions he meant. For citizens of New York City the conditions that led to the death of Christina Lee weren’t the old “root cause” conditions of systemic racism and unchecked capitalism, but the conditions that occur when people forget that the only way to reduce violent crime is to put the bad guys in jail and keep them there.

And in a bitter and ironic rebuke to the Defund the Police crowd, in early January two NYPD officers, Jason Rivera and Wilbert Mora, were shot dead while answering a domestic disturbance call in Harlem. Their murders capped off a year with the highest number of law enforcement officers killed since September 11, 2001. Had the Defunders gotten their way, Officers Mora and Rivera would probably still be alive, and two very unlucky family therapists would have taken their place.

The New York Times was incapable of understanding what any of this meant. In their front-page elegy to the fallen Officer Rivera, they emphasised his experiences as a young man being stopped and frisked by the NYPD. They emphasised his race, Rivera was a son of Dominican immigrants, and his youth—he was twenty-two—but they seemed unable to connect any of the most meaningful dots. Jason Rivera joined the NYPD in November 2020, a few months after the city had erupted into looting and chaos. He joined a force that had been defamed by its critics in City Hall and the media. He joined a police force that had been undermined by the left-wing district attorney for Manhattan, Alvin Bragg, who announced late last year that his office wouldn’t ask judges for jail or prison time for criminals convicted of robbery, assault, or gun possession violations.

Jason Rivera didn’t die because of capitalism, or because rampant violent crime is inevitable in the big city, or because America is a terrible place with a tragic racial history. He died because New York City politicians, academic progressives and media grandees forgot what this city was like when crime was everywhere and everyone carried mugger money. Or maybe they do remember it and liked it that way.

I’m not sure, though, that the rest of the city feels the same. It took almost forty years for New York City to sink to its lowest, another eight or so for it to climb its way out of the pit, but only two short and sharp years of crime and mayhem to begin the backslide. Young New Yorkers may not remember what mugger money is, but they remember riding the subway unafraid and walking through the parks at night. And they liked it. Before last week, many of them had never seen a large-scale cop funeral—the kind where they block off the streets for the procession, with police ranks in full-dress uniform and eulogies by powerful politicians and the Archbishop of New York. This is all new and strange to New Yorkers under forty, and we can only pray that it stays that way.

Rob Long is a television writer and producer, author and journalist. He was writer and co-executive producer of the comedy series Cheers. His previous Letter from New York appeared in the July-August 2021 issue

One thought on “Mugger Money and a New Epidemic of Crime”

The Coffee Guy and the Pastry Woman