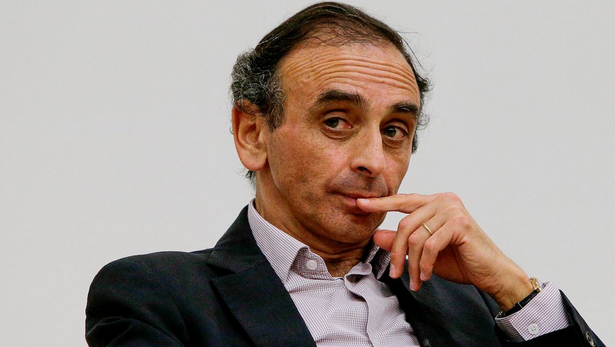 Every politician must, I suppose, have a view of history. The radical tends to see the past as a tale of woe in which improvement, if it has occurred at all, is thanks to such as he, while the conservative tends to see it as a tale of triumph spoiled only by the like of his current opponents. As in one of those drawings beloved of perceptual psychologists, which the viewer can see either as a vase or two candlesticks but not as both, so it is with politicians’ version of history: glory or damnation, but not both.

One of the prominent (and most controversial) candidates in the forthcoming French presidential election, Éric Zemmour (above), is definitely a history-as-triumph man. In part, this might be explained by his background. The son of Jewish Berber immigrants to France not long before Algerian independence, he has gratefully seized the opportunities offered him by the country of his parents’ adoption. He has by application, high intelligence and talent carved out a brilliant career for himself as a patriotic polemicist and broadcaster whose books now sell by the hundreds of thousands. (It may be, of course, that the causative relationship went, and goes, partially in the opposite direction: because he believed in the French Republican model of meritocracy, he was enabled or encouraged to seize whatever opportunities were going.)

He now poses as what every so-called populist candidate poses as, namely an outsider to the political class, which he constantly attacks as betrayers of the country’s glorious past and traditions. The reality is that, if he is an outsider at all, it is of a very ambiguous kind. The fact is that Zemmour has for many years known practically every prominent personage of the French political and cultural scene. In his latest book, La France n’a pas dit son dernier mot (France Has Not Had Its Last Word), he recounts how, after someone abused him in the street and posted the scene on Facebook, the President of the Republic, Emmanuel Macron, telephoned him—they had each other’s private number—and then discussed the immigration question with him. Suffice it to say that most ordinary French people, the true outsiders, do not have the private number of the President of the Republic, nor are their numbers inscribed on his phone. In other words, Zemmour’s pose as an outsider is false, even if the views that he expresses are highly unusual, or extreme, for prominent journalists and broadcasting personalities such as he.

His passion is to arrest what he sees as the inexorable decline, economic, social and cultural, of France, which he attributes to two main factors: the liberal social policies pursued since the student revolt of 1968 (the leaders of which were soon to become the new ruling and cultural elite), and mass immigration from North Africa—Algeria, Morocco and Tunisia—which has fractured or undermined the fundamental cultural, civilisational and political unity of the country which, notwithstanding the many violent conflicts of its history, had always theretofore existed.

Zemmour’s hostility to and fear of Muslim immigration is widely shared, loudly by some of the lower classes, and sotto voce by the higher, who even go so far as to suppress awareness of it in themselves. The long official state of denial that there was a problem of growing Islamism in what amounted to informal ghettoes gave such as Zemmour his opportunity to pose as a brave truth-teller in contradistinction to the cowardly treachery and betrayal of the political class. There is, it seems, nothing like political correctness for giving demagogues their chance. Here again is one of those ambiguous pictures of the perceptual psychologists: all Muslim immigrants are either simple French citizens who differ from others only in their Muslim faith, or all Muslim immigrants are jihadists themselves or supporters of jihad. It seems very difficult for people to keep in mind at one and the same time that there are very well-integrated citizens of Muslim immigrant descent and that there are fanatics of Muslim immigrant descent who seek to extend their power over their peers and eventually over the state itself.

Zemmour exudes, so it seems to me, a real and not purely theoretical hatred of the immigrants and their descendants. Because I have spent my life talking to thousands of individuals, I cannot help but wonder what it is like to be the object of such obsessive hatred ex officio, almost, when you are trying your best to integrate and wish nothing more than the chance of a better life for your children.

I think, for example, of a quiet hero of mine, my barber in Paris. He moved from Morocco twenty-five years ago. He runs a single-man business in what is little more than a cubby-hole. He wants above all a quiet life and that his child should be well-educated. He has an almost scholarly air and everything he says is well-considered and intelligent. He is a fine observer of his adopted homeland.

“Ever since I came to this country twenty-five years ago,” he said, “I have heard the same arguments, from the same people, on the same subjects. France is like a man who has complained of toothache for twenty-five years and hasn’t found the time to go to the dentist.”

That was well, even brilliantly, put; but for Zemmour, this man is one of the rotten teeth which must be drawn from the national mouth, irrespective of his personal qualities. I do not think that I should care to be a member of a group hated by a brilliant popular demagogue and polemicist.

EVERY demagogue needs to shock, and perhaps the most shocking things that Zemmour has to say are that Captain Dreyfus may have been guilty after all, and that Marshal Pétain saved the Jews of France. The former is almost laughable; the latter in particular arouses wrath and disgust, not least among the dwindling Jewish survivors of Vichy and the Occupation.

Zemmour’s argument is as follows: 75 per cent of Jews in France survived, whereas only 25 per cent of Jews in the Netherlands and 48 per cent of Jews in Belgium did so. This needs to be explained: and Zemmour explains it by claiming that Pétain protected French-born Jews at the expense of Eastern European Jews who had immigrated into France between the wars. In effect, he sacrificed the foreign Jews to the Nazi Moloch in order to preserve the French Jews. Far from being a villain, then, Pétain was a hero, not only of Verdun but of Vichy. The fault of historians, whom Zemmour accuses of being an anti-patriotic cabal, is that they have concentrated on the 75,000 Jews who were deported and killed, not the 225,000 who survived—thanks to Pétain.

This, unsurprisingly, has called forth furious denunciations and refutations, for example from such historians as Laurent Joly (La Falsification de l’histoire) and Jacques Semelin (Une Énigme française: Pourqui les trois quarts des Juifs en France n’ont pas été déportés). It was not Pétain and Vichy who saved so many, but ordinary French people, as well as officials and police who deliberately dragged their feet and did not just obey orders.

A couple of anecdotes will illustrate this. In the building in which my mother-in-law lived was an old Jewish lady whose brother had been deported in 1944, on the last convoy of Jews from Paris, and was never heard of again. The old lady escaped the same fate because she had been taken in by a Protestant orphanage and brought up as a Protestant.

My mother-in-law started talking one day to a lady of her own age on the bus. Asked where she lived, she told her the address. “What floor?” asked the lady, and my mother-in-law told her. “What number flat?”—and again she was told, whereupon she burst into tears. That was the very flat in which she had been hidden during the entire Occupation by a non-Jewish French couple. She dared not go out or be seen at the window, for the German Komandatur was directly opposite.

Neither of these ladies had much to thank the Marshal for, it seems to me. But the question arises as to why Zemmour has taken the line he has. I surmise he has done so in order to distance himself as far as possible from any identity politics, apart from those of national identity. The last thing you would expect a French Jew to do is declare Dreyfus guilty and Pétain a saviour: very well, that is what he was prepared to do to prove his nationalist credentials and his distance from any other identity.

If identity politics is the sleep of reason, it certainly brings forth monsters.

Anthony Daniels edited the Everyman anthology The Best Medicine: Stories of Healing, which was published in March last year, under his pen-name Theodore Dalrymple.