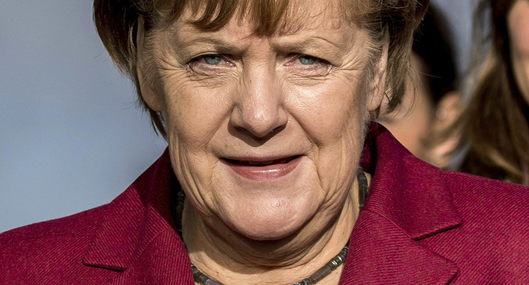 In November 2015 the Economist ran an editorial that its front cover had anticipated with a picture of German Chancellor Angela Merkel and the title “The Indispensable European”. “Look around Europe, and one leader stands above all the rest: Angela Merkel,” the editorial proclaimed. “Mrs Merkel has grown taller with every upheaval.” Going on to list the upheavals that had elevated her, it ended triumphantly: “…and over migration, she has boldly upheld European values, almost alone in her commitment to welcoming refugees”.

If Mrs Merkel was almost alone in welcoming refugees, that was because she had been entirely alone in inviting them into the European Union. The EU’s own rules in the Dublin Accords, designed to deter refugees from asylum shopping, stipulated they should be registered in the first EU country in which they arrived and remain there until their cases had been determined. Mrs Merkel swept all this away when she announced that the refugees would be welcome in Germany and later, when a million of them had accepted the invitation, that they should be dispersed throughout the EU. Other EU states objected. The EU migration crisis she created has still not been fully resolved.

After what seemed like an eternity of farewells, Merkel finally left office on the last day of November 2021. Did all those “upheavals” enable her to rise in the world, or vice versa?

Her decision to close down Germany’s nuclear power program—again, a decision she took “almost alone”—has led not only to Germany having the highest energy prices in Europe but also to its continued reliance on coal to handle the “intermittency” problem of renewables.

She prevented reform of the euro in the 2015 Greek crisis, trapping Greece in a debtor’s prison and inflicting stagnation, high youth unemployment and emigration on Mediterranean Europe.

Her promotion of the undersea Nordstream pipelines 1 and 2, against the objections of Washington and Brussels, increased Germany’s and Europe’s over-reliance on Russian energy while enabling Putin to use energy pricing and supplies as weapons against Poland and Ukraine.

Her 2008 veto of George Bush’s proposal to invite Ukraine and Georgia to join NATO effectively invited Putin to invade both countries, which he promptly did—a result hardly redeemed by what the Economist regards as her standing up to Putin by imposing sanctions on Russia.

Her most negative triumph, however, is the extraordinary fact that although she won five elections in a row, she progressively weakened her own Christian Democrat Party in Germany and its party group, the European People’s Party, in the European Parliament.

How did she manage that? It happened by degrees. In her first election of 2005 she prevailed over the Socialists (SDP) by less than 1 per cent in votes. The result was her first grand coalition—an alliance of the CDU-CSU, the Social Democrats (SPD) and the pro-business FDP liberals with a joint program reflecting largely SDP policies.

In the 2009 election, the CDU-CSU suffered a small loss in votes, but since the SPD suffered a much bigger one, Merkel was able to form a Centre-Right coalition with the liberal FDP only. She resisted the FDP’s pressure for tax cuts, however, and most other Right-leaning policies.

In 2013 Merkel’s party had its single best share of the national vote under her, but the FDP, wounded by her resistance to their key policies, failed to clear the 5 per cent hurdle to enter parliament. Without the FDP, Merkel lacked the votes for a Centre-Right coalition and had to form a coalition with the Socialists, narrowly averting a Centre-Left coalition and her own retreat to opposition.

Perhaps that was too much stability for too long. The 2017 election saw major changes: a collapse of both the CDU-CSU and the SPD votes, a rise in the Greens, the return of the liberal FDP, and the arrival in the Bundestag of the “far Right” Alternative for Germany as the third-largest party. The two battered main parties had to form another grand coalition, and people began to talk of “the social democratisation of the Christian Democrats”.

Early in 2021, with the CDU-CSU now led by Merkel’s chosen successor, the so-called “sister parties” obtained their worst-ever result—a mere 24 per cent of the national vote—and finally lost power to a less-than-grand coalition of the Socialists, the Greens, and the liberal FDP, under the SDP leader Olaf Scholz as Chancellor.

Media and diplomatic attention will now switch from Merkel and the Christian Democrats to the new coalition and its 177-page coalition agreement with commitments on everything from “phasing out coal by 2030” to introducing votes for sixteen-year-olds in national elections. It’s an attempt to combine a familiar wish-list of Green, leftist and Europhiliac policies with a drive to modernise and energise a society and economy that has been allowed to stagnate comfortably under the soporific influence of a de facto undervalued exchange rate.

There’s a large implicit contradiction there, of course, and some of the conflicts likely to emerge in government are already fodder for the commentariat. Will the pro-business FDP’s Christian Lindner, now Finance Minister, be able to forge a common policy with the SDP’s Robert Habeck, who holds the new ministry of Economy and Climate? Or will he ask if it’s possible to energise an economy with unreliable supplies of high-priced energy? How likely is the new German foreign minister, Annalena Baerbock of the Greens, to get her policies—halting Nordstream 2 and holding China to account over human rights—past a Chancellor who is anxious to keep Russia and China as Germany’s major markets?

All is now flux. The coalition is likely to have a rocky start, and it may even founder. On the other hand, Germany is accustomed to coalitions—only Konrad Adenauer’s second administration had a single-party majority and even so he created a coalition with a smaller party. The desire to keep power is a strong glue. And Merkel’s legacy includes one especially valuable bequest to the new coalition: the devastation of the Christian Democrats.

You can’t overemphasise the importance of that devastation. Since 1945 the Christian Democrats have been a strong, respectable and seemingly permanent force for stability in Western Europe. Though they always claimed to be centrists, their domestic and economic policies overlapped with those of the British Tories 80 per cent of the time. In the Cold War they were reliable allies for conservatives and social democrats in resisting communism. And when the Cold War ended, though some Christian Democrat parties shrank or splintered, the German CDU-CSU remained the largest party in the new united Federal Republic.

Gradually the party lost its purpose, its identity and finally its way. The end of the Cold War meant that it was no longer needed as the rock of resistance to communism in Western Europe. Growing secularism in Europe and the weakening of Christianity—and the German Catholic Church is the most “liberal” (that is, least devout) Catholic congregation in Europe—meant that its Christian identity, though not very demanding, was a source of unease and embarrassment to many party members and to most party leaders and intellectuals. Its secondary ideology as the party of a federal Europe began to separate its leaders from some of its voters, as in the British Tories, especially after 1989 when that ideology began to demand policy commitments of “more Europe”.

All these sacrifices, though painful and disorienting, could be justified by the participation of the Christian Democrats in “grand coalitions” where they looked like necessary and perhaps temporary compromises with useful allies until, as I noted earlier, people started talking about “the social democratisation of the Christian Democrats”. Because the CDU-CSU was the dominant party in the European People’s Party in the European Parliament, moreover, it transmitted this ideological cross-dressing to its party allies until the EPP became the senior partner in a Euro grand coalition, and then after the last Euro-elections—which returned more Socialist, Green and Liberal MEPs—the junior partner.

What has turned this process from a prudent political strategy into a recipe for devastation is that other parties have appeared that appeal to many former Christian Democrat voters. That explains why the CDU-CSU lost half of its votes between the 2013 and 2021 elections. Those newer parties are now routinely damned as “populists” or “nationalists”, but their policies are in fact largely former Christian Democrat policies. These “nationalists” don’t want to leave the EU; they merely want to transfer powers from institutions in Brussels to less remote and more accountable national parliaments. These “theocrats” have no intention of imposing religious dogmas on doubters; they merely think their country’s religious traditions and moral customs deserve to be treated with respect by international courts. These “social engineers” are not opposed to family welfare policies, they merely try to design welfare policies that for once strengthen families and provide work for bread-winners.

Led by the Hungarian and Polish governments, these new insurgent Christian Democrats have published statements of common principles and pledged a vague future co-operation across Europe. There are important differences between them, but a new broad-based European conservative movement may be emerging. So the CDU-CSU and its traditional allies have a choice to make: will they oppose these new parties or unite with them? The CDU holds a leadership election between now and January 16. That should be its main topic.