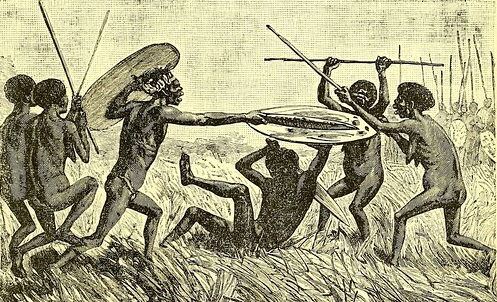 Infanticide—the deliberate murder of new-born infants and young children—was practised widely, and perhaps ubiquitously, among Australian Aborigines before the coming of Europeans and the imposition of Western values, which, unlike the values of pre-contact Aborigines, regarded the deliberate killing of babies and small children as murder. How common was infanticide among pre-contact Aborigines? According to University of Michigan professor of anthropology Aram Yengoyan: “Infanticide was the primary means of population control. In theory, infanticide could have been as high as 40% to 50% of all births, and the population could have survived. In actuality infanticide rates were lower, and probably ranged from 15% to 30% of all births … Presently, infanticide is no longer practiced on missions and government stations. However, differential care (physical and affective) extended to infants could be interpreted as infanticide.” (Aram Yengoyan, “Biological and Demographic Components in Aboriginal Australian Socio-Economic Organization”, Oceania, Vol. 43 (2), December 1972, p. 88.)

Contemporary European observers of nomadic, tribal Aborigines were in apparent agreement that about 30 per cent of new-born Aboriginal children were routinely killed. According to Samuel Gason (1845–97), an early settler of the Flinders Ranges, writing of the Dieyerie tribe of the Cooper’s Creek area between South Australia and Queensland, “about thirty per cent are murdered by their mother at birth”. He gave as the reasons for this that “many” of the mothers married “very young, their first-born is considered immature, and not worth preserving”, and “because they do not wish to be at the trouble of rearing them, especially if weakly. Indeed, all sickly or deformed children are made away with, in fear of becoming a burden to the tribe.” (Cited in Robert Braugh Smyth, The Aboriginals of Victoria, Vol. I (London, 1878), pp. 51-52.)

Similarly, Rev. George Taplin (1831–79), a prominent Congregationalist missionary to Aborigines in the Murray Valley, stated that in the early 1860s, “one-third of the infants which were born were put to death. Every child which was born before the one which preceded it could walk was destroyed, because the mother was regarded as incapable of carrying two … All deformed children were killed as soon as born. Of twins, one and often both were put to death.” (Ibid., p. 52.) James Dawson (1806–90), a Scottish-born pastoralist arriving in 1840, who, according to his entry on Wikipedia “vigorously defended Aboriginal interests against government officials, politicians, and his fellow squatters and others”, agreed. “Children born with any deformity or defect attributable to close consanguinity, and likely to render them an encumbrance in their wanderings about the country, are destroyed. In an instance of two dumb children, which was attributed to this cause, the tribes would have put them to death but for British law.” (James Dawson, Australian Aborigines: Their Languages and Customs of Several Tribes of Aborigines in the Western District of Victoria, Melbourne, 1881, p. 61.)

Most European observers noted that these killings were carried out without the slightest sense of guilt or sadness; they were necessary for the survival of the tribe. Apparently, most infants were killed by burying them alive. Rev. Frederick August Hagenauer (1829–1909), a Moravian missionary in Gippsland, stated that Aboriginal tribes would “bury new-born babes alive in the sand”, which was formerly “a common practice”. (Ibid.) But in many cases, the reality of what occurred was far worse. According to Peter Beveridge (1829–85), a Scottish-born grazier near Swan Hill, who arrived in 1845 and wrote a posthumously published (in 1889) work on the Aborigines, “Infanticide was often practiced, and meals were made by mothers of their own offspring. This practice is attributable to laziness principally; for if a mother has two children, one two years old and the other just born, she is sure to destroy the youngest.” (Ibid.) Similarly, William Edward Stanbridge (1817–94), a founder of Daylesford and a local council member there, gave a similar description of their infanticide customs: “New-born babes are killed by their parents, and eaten by them and their children. When such revolting occurrences take place, the previously-born child is unable to walk, and the opinion is that, by eating as much as possible of the roasted infant, it will possess the strength of both.” (Ibid.)

Elderly people who could not keep pace with the younger members of the tribe on their nomadic wanderings in search of food were also killed. As James Dawson observed, “When old people become infirm, and unable to accompany the tribe in its wanderings, it is lawful and customary to kill them … When it has been decided to kill an aged member of the tribe, the relatives depute one of their number to carry out the decision. The victim is strangled with a grass rope, and the body, when cold, is buried in a large fire kindled in the neighbourhood … Very often the poor creatures intended to be strangled cry and beg for delay when they see the preparations made for their death, but all in vain. The resolution is always carried out.” (Dawson, op. cit., p. 62.)

Most contemporary observers, and recent demographers, have agreed that girls were murdered more often than boys. According to Rev. C.W. Schurmann (1815–93), writing in The Aboriginal Tribes of Port Lincoln in South Australia (1846), “From the greater number of male children reared one may infer that not so many of them are killed at birth as of the female sex. In extenuation of this horrible practice, the women allege that they cannot suckle and carry two babies at once” (p. 224). Similarly, William Wyatt J.P. (1804–56), in his Manners and Superstitions of the Adelaide and Encounter Bay Aboriginal Tribes (1879), noted that “female infants at birth are not infrequently put to death for the sake of the more valuable boys, who are still being suckled, though three or four years old, or even more” (p. 162). Anthropologists who have studied gender ratios among colonial-era Aborigines living in tribal conditions have concluded that there were probably about sixty-seven females for every 100 males, strongly suggesting that Aborigines killed far more girls than boys.

The two main reasons for the prevalence of Aboriginal infanticide are straightforward and clear. In their 50,000 years in Australia, Aborigines never planted crops to eat nor domesticated livestock as food. They were, and remained, nomadic hunter-gatherers. At all times, their population was therefore subject to an upper size limit dictated entirely by what a tribe could obtain by hunting and by foraging for eatable vegetation. No tribe could exceed in size the foods procurable by a hunter-gatherer lifestyle; not infrequently, the size of the tribe must be even lower than this figure, when poor weather conditions or natural disasters decreased the amount of food available. Excess mouths to feed could simply not be tolerated; their existence threatened the very existence of any tribe of nomadic hunter-gatherers. Infanticide, as well as the killing of the elderly, was the only way that Aboriginal tribes could cope with this upper population limit, as Yengoyan (above) suggests.

The second main reason for the prevalence of infanticide was that the mothers of small children, who were as nomadic as any other members of their tribe, could not carry more than two, or at most three, children, especially given that they also acted as beasts of burden, carrying most of their family’s possessions, as was set out in my previous article on the Aboriginal mistreatment of women. Nor could they suckle more than two or at most three infants, and often fewer, who regularly had no other source of nourishment.

It might be useful here to do some calculations about the number of Aboriginal infants murdered by their parents. The Aboriginal population of Australia in 1788 is generally estimated at about 350,000. If accurate, this suggests that about 10,000 Aboriginal children were born each year in pre-contact Australia. If indeed 30 per cent of them were killed soon after birth, this means—assuming a constant population—that 300,000 Aboriginal infants were killed in the course of each century, or 3 million per millennium. This means that, over the course of 50,000 years, about 150 million Aboriginal babies were murdered during the history of the Aboriginal people in Australia. Today’s radicals and activists constantly (and nonsensically) claim that European settlement here resulted in “Aboriginal genocide”, but what, then, is one to make of a death toll—remember, a murder toll—that makes Hitler, Stalin, Mao and Pol Pot look like humanitarians?

Had Australia not been settled by the British, who quickly and decisively put a stop to infanticide and the other enormities of Aboriginal society, probably something like 700,000 additional Aboriginal infants would have been murdered by their tribes. Another way of looking at this reality is that, since 1788, the population of Australia has risen from 350,000 to 26 million, with rather fewer inhabitants nowadays engaged as perpetual nomadic hunter-gatherers, with rather less today of the horrors of cannibalism and infanticide I have documented in this series, and with a literacy rate which has risen from zero to 100 per cent.

One might assume that this societal relic of the Stone Age, surpassed throughout Europe and Asia by societies and nations whose cultural and scientific advancement enabled them to support and feed vastly larger populations at incalculably higher standards of living, would be regarded with horror and disgust today by any rational observer. But for the contemporary Australian Left, as well as by most of the uninformed mainstream, precisely the opposite is true, with pre-contact Aboriginal society regarded as a virtual utopia on earth, a utopia destroyed by the coming of white Europeans.

This view is not merely inaccurate, but Orwellian in being the exact opposite of the truth. Virtually all recently published works by writers obviously sympathetic to the Aborigines delete from their accounts any of the enormities highlighted in my recent articles in Quadrant—cannibalism, infanticide, the gross mistreatment of women—which were apparently a ubiquitous part of Aboriginal life for 50,000 years; in contrast, all of the large-scale deficiencies and ills in Aboriginal society since 1788 down to the present are always blamed on the white man.

The Left’s distortion of the real nature of Aboriginal society is sometimes described by conservative commentators as stemming from “cultural Marxism”. Although one can understand why this term has been used, in my opinion it is an accurate description of the situation only by an extended use of the term; the situation today is in fact far worse. Ironically, orthodox Marxists would regard pre-contact Aboriginal hunter-gatherer nomadic society as inevitably doomed to be replaced by a higher and more advanced mode of organising the means of production, and rightly so: they would shed no tears about its passing. Indeed, if Australia had somehow had a Marxist government a century ago, whatever remained of the Aborigines’ hunter-gatherer lifestyle would have been abruptly ended, with no apologies or regrets.

The distortion of the real nature of Aboriginal society by today’s Left is, in fact, a combination of all-embracing anti-white racism, and an equally all-embracing attempt to depict Australian society as it has emerged since 1788 as intrinsically evil and racist. Indeed, the catastrophe which allegedly (and inaccurately) occurred to the Aborigines after 1788 is today always at the heart of the Left’s indictment of Australian society, having replaced its former preoccupation with social class inequality, which was at the heart of its critique until the 1970s or 1980s. Today, little is heard of the exploitation of the white Australian working class, formerly ubiquitous. The best way of dealing with this gross distortion is to set out the awful realities of pre-contact Aboriginal society, exposing again and again how this was the exact, Orwellian opposite of what the Left invariably claims.

Why Indigenous University Students Are Doing So Well

Aborigines Want More Than a Voice in Parliament

Fabrication and Deception: A French View of ‘Dark Emu’