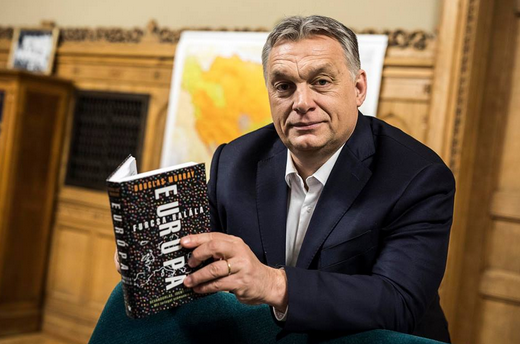 My guess is that you may be thinking you’ve heard more about Hungary in the last few days than at any time since the Hungarian Revolution of 1956. It’s been the subject of worried liberal editorials, concerned progressive news reports, alarmist Never-Trumper op-eds, and a collective nervous breakdown live on Twitter across America.

Admittedly these things happened in America. But when the American Left has a hissy fit, the rest of us worldwide are put under house arrest.

No, don’t panic. I’m not talking about Covid lockdowns, compulsory mask mandates, vaccine passports, or the sins of Dr Fauci. That’s one set of crises Australia doesn’t need to import. Oz has outdone every nation except New Zealand in that regard.

The reason for Hungary’s sudden eruption into America’s culture wars, and thus into Australia’s, is that its prime minister, Viktor Orban, gave an interview to Tucker Carlson on Fox News in which the questions were polite and the answers informative. And that was thought to be a national outrage by all the progressive guardians of official “truthiness” (Stephen Colbert).

Carlson is a rare conservative news anchor and a skilled interviewer. He varies the bowling—tough and pressing towards those obfuscating, seeking clarity from those answering his questions. The second method is wrongly despised by most modern journalists anxious to win a reputation as a dragon-slayer. In fact, a hostile interrogation serves mainly to put the interviewee on the defensive. He clams up. That method rarely yields a news story, let alone a scoop. Given a platform and apparently “soft-ball” questions, however, interviewees often relax and say more than they intended. They realise their mistake when they read the next morning’s papers.

There was an additional reason for treating Orban to a formally polite questioning. He is known to an American audience mainly from attacks made on him by the Left, including Hillary Clinton and Joe Biden, the latter calling him a “totalitarian thug”. Orban was therefore in the position of a condemned man allowed by Carlson to tell his side of the story. And he did so quite successfully in an interview excerpt since shown on Fox.

He defended himself against the charge of totalitarianism by politely suggesting that when Biden talks about Hungary, he doesn’t know what he’s talking about. That response called to mind a remark by the late George Jonas, a distinguished Hungarian-Canadian writer and Holocaust survivor, that he often met people who had never been to Europe, knew no Hungarian, and couldn’t find Budapest on a map but—“That Viktor Orban is an anti-Semite—that they know.”

Almost no one now makes that accusation. Orban’s years in power have seen strong government support for the revival and flourishing of Jewish life in Hungary. There are many accusations against the current Hungarian government that have some credibility, but neither anti-Semitism nor totalitarianism is among them.

In fact, a few years ago, when a New York Times reporter asked the Nobel Prize-winner Imre Kertesz if Hungary was a dictatorship, Kertesz replied:

If you can write, speak openly, openly disagree, even leave the country, it is absurd to speak of dictatorship. And this is what I said. This is empty, ideological language, to call Hungary a dictatorship today! And the interview was never published. Which a friend of mine very accurately said is a kind of censorship.

Apart from the likelihood that Biden gets his news from the New York Times, what explains that kind of self-confident willingness rooted in ignorance to make the silliest, crudest and most ahistorical denunciations of another country, a NATO ally no less, and its leaders?

Orban’s own explanation, extending through several answers in the interview, is essentially that of politics. There’s a new kind of political division in Europe and across the Atlantic which pits a post-national, post-democratic liberal ruling class against the national democracies and their elected governments. In the EU and the US the central government is constantly striving to take more power from national and state governments respectively since it regards them as backward and hostile.

Seeing the failures of Brussels over migration, the Euro-crisis, energy costs and the Greek meltdown, the “provinces” began to resist in the 2014 European elections which saw the upsurge of insurgent parties of Left and Right against the mainstream parties of the Centre. The mainstream parties of the Centre interpret this battle (in self-serving terms) as one between “populism” and “liberal democracy”. Here’s how it looks to Orban, in his own words to Carlson:

The Western liberals cannot accept that inside the Western civilisation, there is a conservative national alternative which is more successful at everyday life [than] liberal ones. That’s the reason why they criticise us. They are fighting for themselves, not against us. But we are an example that a country which is based on traditional values, on national identity, on the tradition of Christianity can be successful—sometimes more successful than a leftist-liberal government.

Orban emerged as the leader of the national conservative (“populist”) insurrection in 2015 when he resisted the decision of Germany’s Angela Merkel to “welcome” more than a million migrants of uncertain legality into “Europe”. He was denounced as a “fascist” for protecting Europe’s border in accordance with the EU’s own entry regulations (which Merkel and Brussels had brushed aside). Europe’s leaders have since shamefacedly adopted his migration policy, but he still has only a few other governments on his side on the larger political package, which he calls Christian Democracy, of defending the nation-state, strict migration control and a civic national identity rooted in Hungarian life, language and tradition as against multiculturalism.

That’s a vulnerable position for the prime minister of a small country to find himself in, and he is plainly hoping that the next round of elections throughout Europe will give him some allies in the EU, since Brussels and Washington are allied against him. And he faces Hungarian parliamentary elections next April which, contrary to their own “authoritarianism” meme, the opposition parties believe that post-Covid they have a good chance of winning.

But a nervous longing for Orban’s defeat goes well beyond left-wing governments, the European Commission in Brussels, and the US State Department. It extends to the political and moral Left almost everywhere, to the international media, to non-populist political parties in Western Europe, to the mainstream cultural institutions of the West, and to all the institutions of “woke” capitalism. The reason is that if you are attempting to impose a new culture covering all aspects of life (at least in principle), you cannot tolerate a nation or a government radically opposed to your radical new doctrines.

“Live and let live” used to be the ur-principle of traditional liberalism. It’s one that Orban cites approvingly in the Carlson interview. But it’s a principle that progressives and Left-liberals now reject in their cultural revolutions that tear down statues and prohibit the public expression of heresies. That helps to explain why a single short interview provoked a storm of outrage from America’s various Lefts and their occasional allies on the “pragmatic” Centre-Right—pragmatism being a blend of “not knowing why you believe what you believe” plus lower taxes.

It is, of course, true that Hungary can’t be a model for other—very different—countries across the world. It’s not large, prosperous or powerful enough to fill such a role. Nor does any Hungarian I’ve met think in such terms—including Orban. It’s progressives from Mao to Castro who see their own societies as vanguards with a duty to bring enlightenment and social justice to mankind by main force. Conservatives—and Orban is a conservative despite his own occasional protestations—don’t think of their countries as bases for revolution elsewhere. They want to preserve and protect the ways of life and traditions of their own societies. If they serve as an inspiration for others to do the same, that is fine with them.

Paradoxically it is the Left in Brussels and elsewhere that has elevated Orban to the role of symbolic leader of the resistance to progressivism whether in its Biden-like bureaucratic form or in its Leninist woke identity. At almost every point—on patriotism, on cultural tradition, on learning, on religion, on common sense, on liberty—Orban is the obstacle they want to remove. But his emergence in that role is due to two factors: first, the Brussels powers-that-be keep proposing more and more progressive policies for Europe as a whole, even when those policies should be the prerogative of member-states; second, the Centre-Right parties make only a largely formal opposition to this constant pressure so that over time progressivism seems inevitable.

Eventually, conservatives find themselves in the position of Boris Johnson, who wins power with a majority of eighty seats but seems unable to prevent illegal immigration in small boats across the Channel or the transformation of Britain’s cultural institutions like the National Trust or the British Museum into missions of a woke revolution.

The difference between Johnson and Orban is that Orban doesn’t take the victory of the other side for granted. He has responded to the Left’s long march through the institutions by creating new institutions and sending his supporters into them.

It’s not yet called “creating a level playing field”, but that’s what it’s doing.

6 thoughts on “Hungary Through the Looking Glass”

Hypocrisy by the Sackful