Chipping Away at Names for the Nation 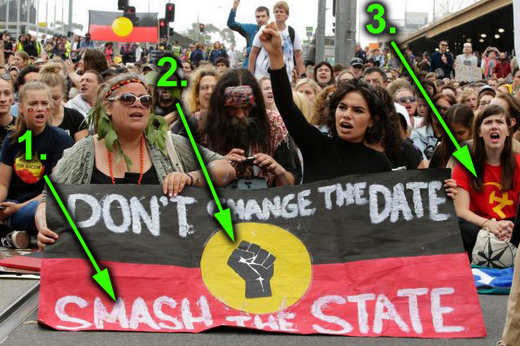 Does anyone remember when portraits of the Queen used to hang in public offices and schools? Two versions were usually seen: the 1954 painting by Sir William Dargie showing Her Majesty in her “wattle dress” and Pietro Annigoni’s 1955 portrait with Windsor Castle in the background.

You won’t find them now. They were surrept­itiously removed at some time after the Whitlam revolution. There was no public announcement, no debate. They just vanished, presumably as a result of some internal unreported pro-republican edict from deep in the public service.

That is how the Left—and the public service, in Australia anyway, is an ally if not a component of the Left—likes to work. No fuss, no consultation, no government policy announcement, just the slow silent advance of the leftward-flowing tide. And what do leftist bureaucrats care if a supposedly conservative government is in power? It never lifts a finger to direct the tide the other way. Look at the “Australian” curriculum. Look at the Australia Council and the money it squanders on leftist “culture”. Look at the price of energy in a resource-rich land thanks to our obeisance to the superstition of “renewables”.

The latest instance of leftward creep comes to us courtesy of Australia Post. Desperate to find a role for itself now that so few people send letters, our postal service has quietly decided to get in on the corporate rush to social engineering. Persuading its users to “include a traditional place name in the mailing address” is the sphere of wokery it has chosen. It is hard to think of a better way of bumping up the number of items that get lost in the mail. Perhaps a traditional name will have to be devised for the dead letter office.

Actually, this brilliant idea is not Australia Post’s but was thought up by “Gomeroi woman” Rachael McPhail (and with all respect, that doesn’t sound a terribly traditional name in the way Australia Post means, does it?). Rachael, who discovered she was Aboriginal only at the age of thirty-two, has somehow persuaded the dopey management of Australia Post to adopt what is not simply one more obstacle to the easy delivery of mail but a linguistic change that is part of a bigger and more sinister picture. Resurrecting (or inventing) “traditional” place names, in a nation where, unlike Canada or South Africa, bilinguality has never been an element in our history, is part of the separatist attempt to dismantle Australia as we know it and turn it back into the paradise it allegedly was before 1788, or as close as separatists can get to that without ethnically cleansing the descendants of everyone who’s arrived here since then.

To be quite thorough about this they should also get rid of the name Australia, and no doubt Australia Post will soon adjust its name accordingly. But what to? What was the continent called in those arcadian days when whitey wasn’t even a speck on the horizon? Terra australis? You can’t go back to calling it that because it’s too like the present name they want to change. You can’t call it Terra nullius because we now recognise it wasn’t nullius. To single out as a replacement the name of one or other of the so-called “first nations” might lead to complaints of discrimination from the “nations” whose names aren’t chosen and the risk of a tribal war of the sort fantasists like Bruce Pascoe pretend never happened. It would be better to choose a neutral name. I wondered whether McPhailia would do, in honour of Rachael’s great idea, but that sounds like a badly cooked hamburger. Imagination is needed, the kind of bold inventiveness an ad agency in Melbourne showed in coming up with the Andrews government’s self-congratulatory television ads with blithe disregard for the fact that Victoria’s colander-like quarantine led to 90 per cent of the nation’s Covid deaths being recorded in that state. Why not brief them to suggest our country’s new name?

And what qualifies as a traditional name for postal purposes? There are already dozens of place names of putative Aboriginal origin in use in Australia in both city and country—Woolloomooloo, Jika Jika, Leongatha, Oodnadatta and suchlike—but they don’t give the full picture of the richness of Aboriginal culture because we have always been told that they mean nice anodyne things like “happy meeting place of the laughing waters” and “smiling mountain of the dusky dingo” and so on. We need some names that express the nitty-gritty of life in those halcyon pre-European days. Something that says, “I am going to knock your front teeth out with a rock” or “this spear is to be inserted into your thigh to make a man of you”. No doubt Rachael could supply translations for those and other concepts to be turned into place names fully expressive of Aboriginal life and lore not only as it was in the past but as it continues in areas under “traditional” control today.

If that sounds brutal, it is truthful, and too often those who spruik the Aboriginal cause—which, to be truthful again, is not really what they do: it’s not so much the Aboriginal cause that interests them as the anti-Australian one—try to draw a veil over the unpleasant elements in traditional indigenous life.

Rachael is the very model of a modern racial activist. An Australia Post media handout tells us that she “has stayed close to her First Nations roots by practising ways of decolonising her lifestyle”. Decolonising? Does she wear shoes? Does she use a mobile phone? We know she drives a car rather than, in traditional manner, walk because that’s how the place-names idea came to her. “I often drive through Wiradjuri Country and I started noticing which councils acknowledge Country on their signage,” Australia Post quotes her as saying.

Rachael found she was Aboriginal, the handout informs us, “when she learnt her great-great-grandmother had most likely left their culture to protect her son as lighter-skinned children were being taken from their families at the time”. (Unless Australia Post is going to issue all its media releases in Gomeroi it really should employ someone who can write clear English.)

When Rachael delivers “acknowledgment of country”, we are further told, “she also includes facts about the land on which the gathering is held to spread awareness”. And what would that be awareness of? Massacres? Remains of the stone-built towns testified to by Pascoe that have since mysteriously disappeared?

Of course if it’s a question of chipping away at the nation we have inherited you can be sure of finding the ABC in the thick of it. It too has started sneaking in “traditional” names in its on-screen location identifiers in news reports. Under the “official” name is the allegedly Aboriginal one. Moreover, the ABC is now so boldly sure that it can get away with anything that it admits that this has little to do with the simple designation of a locality. According to the Sydney Morning Herald, the ABC as “a partner for Reconciliation Australia’s Action Plan”, is intent on “making Aboriginal and Torres Strait Islander names, voices and languages an everyday part of the vocabulary”. In other words, it is intent on trying to make the nation bilingual—and what could be more separatist than that? As the ABC’s “Indigenous lead”, Phillipa McDermott (again not quite the sort of traditional appellation you’d expect), puts it, “indigenous languages and place names are not just a means of simple identification”. Their use “helps to pass on the country’s culture”—by which she means Aboriginal culture—“onto [sic] new generations”.

There is also the problem of which name to use. To take just one well known spot on the Place Names Chart helpfully supplied by the Australian Museum, Sydney Cove has four names, War-ran, Wee-rong, Warrane and Warrang. Are ABC viewers expected to be fluent in them all? Naarm, incidentally, is Melbourne. Will a nation still stop for the running of the Naarm Cup?

Political philosophers sometimes talk of “historical inevitability”. It was historical inevitability that led to the occupation, by a technologically advanced and expanding nation, of a largely empty continent peopled here and there by nomadic tribes. And surely historical inevitability, until recently, was acting to ensure that that descendants of the occupiers, with their liberal and humane beliefs and awareness of injustice as a consequence of the occupation, were moving towards an accommodation with the descendants of the Aborigines who had originally occupied the land, and to ensure also that those Aboriginal descendants, instead of only suffering the disadvantages that occupation had brought, could share in its multitudinous advantages as equal citizens of a prosperous and benevolent nation.

Aboriginal activists, and the white ideologues who have infected them with the pernicious hate-based politics of race, imported mainly from America and clumsily applied to local conditions, have just about stopped that progress towards reconciliation, and are succeeding in replacing it with a policy of separatism from which only those who wish to see Australia in its present form destroyed can hope to profit. Talk about “nations” and “treaties” is part of the strategy of these new racialists. So, in a minor way, is the proposal to use Aboriginal place names, which will not stop at that, but will go on, as at Ayers Rock, to demand abolition of the conventional name given to our towns and cities by the people of European descent who built them. Australia Post and the ABC should be ashamed of conniving at this conspiracy to bring about the ultimate dismemberment of the nation whose name they bear.

And by the way, the language manipulators of the new racialism are coming for your property. Watch out for another sly semantic adjustment that public servants and their like are sneaking into government and official communications. If you own land—anything from a house block to a sheep station—you are no longer a landowner but a landholder. Now why would that be? Is it to reinforce the idea that the real proprietors of Australia are the “traditional owners, past, present and future” as it’s becoming obligatory to recite umpteen times a week in those “traditional” ceremonies that go all the way back to the 1970s? That the rest of us are here on a kind of tenancy? You might have thought the ceremonies were merely a polite fiction to make everyone feel nice, but don’t be deceived. You can’t have two lots of owners, so get ready to hand over your keys, landholder.

The Monster at the End of the Book

The Long Search for Australian Identity