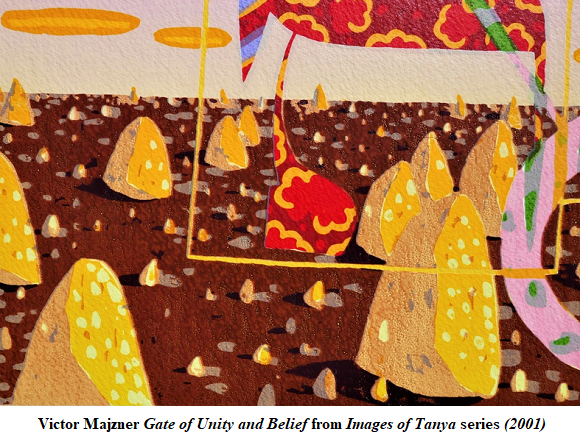 I have written two books on religion and art. Both were born of a felt need to foster a culture of artistic creativity, in any of the fine arts, be it visual art, literature, music and so on, which achieve the elusive combination of the highest aesthetic standards and informed religiosity. The first book is Aesthetics and the Divine: Engaging Artists, Fostering Religious Art (2017), which presents a number of examples of work by distinguished artists that achieves that synthesis. The second book is The Art of Chaim Bill Meyer (2021), an important contemporary Australian artist, which traces the stages of his creative development towards artistic expression of a deepening religiosity. It is not for me to evaluate my own books, but I want here to present the project of restarting religious art which these books seek to serve and express. Those who are interested to read them can decide whether they do so successfully. 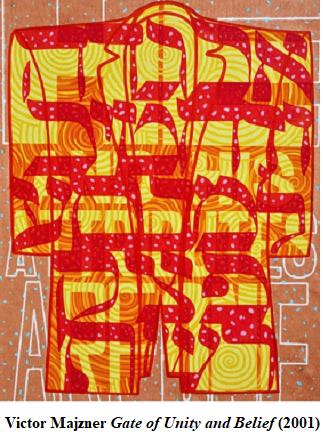 combination of great artistic talent and informed (that is to say, pedigreed as distinct from today’s “New Age” or merely subjective) religiosity existed in the past when culture was religious and there were great artists who expressed that religiosity in their work. There are today patches and individual exponents of high-calibre religious art, but they are rare. A number of years ago the director of the National Gallery of Victoria opened an exhibition by the significant Australian artist Victor Majzner, called “Painting the Torah”, which successfully accomplished that combination. The gallery director expressed surprise at the quality of the exhibition because, if I correctly remember his words, he thought that religious art (of world standard) was dead and had become an oxymoron.

The need to revive religiously informed high art is born also from a need (for me, and I suspect many others) for “truth” in art. High or serious art is not simply an aesthetic accomplishment. It is also an embodiment of ideas. Art is an expression of a worldview. This is true of all great movements in the fine arts: they are aesthetic modalities of what philosophy would call a construction of the essence of reality. Hegel called art “the sensual representation of the Absolute”, artistic expression of what philosophy took to be “Absolute” or ultimate. This is why so much of the contemporary art that has made its way into the Museum of Modern Art or the New Tate, or a host of galleries of contemporary art, is unsettling. Not because one doesn’t “understand it”, but because one does understand it: it is the visual expression of a philosophical nihilism or deconstruction of values. It might, by purely aesthetic criteria, be “great art”, but it is not what I and many others regard as true art, just as the philosophical nihilism it embodies is not true.

The reality, stated by the director of the National Gallery of Victoria at that exhibition opening, that religious art was largely dead is a casualty of secular modernity. Put baldly, to take the example of the visual arts, religious people can’t paint (that is to say, world standard art) and those who can paint are not religious. This is stridently relevant now, but also has been so for the last few hundred years. In the case of Jewish experience, a boy or girl with artistic talent, who came from the small townships in the European pale of settlement, which lived and breathed traditional Judaism, and went to the great urban art academies of their host countries, would there have their Judaism spiritually annihilated. And the secularly acculturated students in the cities who did enter and graduate from the academies in any case never knew much of traditional faith. The fine arts academies were for the most part a stronghold of secularism and a bohemian mystique which celebrated moral laxity. Their culture was loaded against religious orthodoxy.

A legacy of secular, and secularising, culture has brought spiritual illiteracy. How and where now can religious understanding and artistic talent come together? This is a key question for the “restarting” of religious high art; for secular modernity has sundered the worlds of religious faith and art. 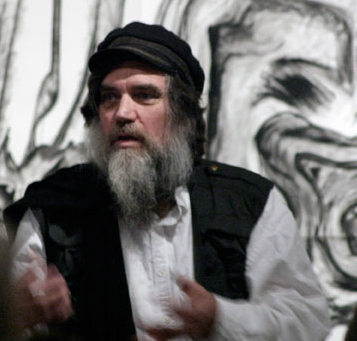 background who find their way “back” to religious experience. They take their artistic training with them and eventually employ it to express their newfound religious understanding. The Art of Chaim Bill Meyer explores precisely such a case. Meyer (right) was raised in a secular household, although there he had relatives and influences in his environment which gave him an intimation of the spiritual world of Judaism. His early artistic development did not, however, express these religious traces until he travelled overseas and in certain student and postgraduate contexts became more aware of the spiritual heritage of Judaism.

That discovery was consolidated artistically when he returned to Australia, where he became recognised as a significant artist and eventually President of the Print Council of Australia. His work had been acquired by the Tate Gallery in Britain as well as the National Gallery of Australia and he enjoyed significant recognition in Australia. It was not until a further, fourth phase, when he immersed himself in traditional Jewish learning, that his work gained new spiritual depth. That was followed by yet another stage in which he developed the form-language of his art to express that deepened spiritual understanding. This has led in recent years to a remarkable synthesis in his work of art of international calibre with spiritual depth and knowledge. Here we see one scenario of the rapprochement of art and religion, namely in the coalescence of the artistic and the spiritual accomplished in the inner journey of the artist alone.

There is, however, under the modern conditions of the sundered worlds of religion and secular culture, another scenario for the cultivation of great religious art, which does not have to be undertaken by the artist alone. This was for me the “discovery” documented in my book Aesthetics and the Divine: where secularly raised and trained artists, who were open and interested in the religious world but not yet knowledgeable of it, could become conduits for great religious art through collaboration, interaction or engagement with a religious mentor. 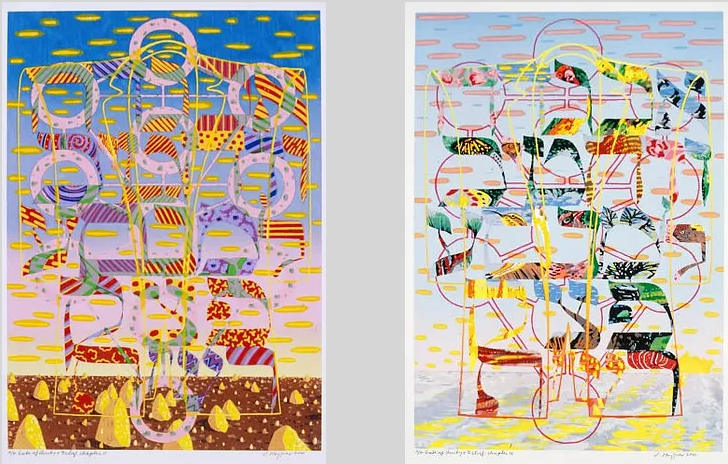 Aesthetics and the Divine explores different artistic engagements which I, a religious teacher, had with important Australian artists: a painter, Victor Majzner, former head of painting at the Victorian College of the Arts; Richard Freadman, a writer and professor of English; and a leading Australian composer, the late Felix Werder. I spent a year studying a religious, mystical text, known as Tanya, with Majzner after which he produced a series of ten “Images of Tanya”, which we discussed during their creation, piece by piece. (Two of these paintings are reproduced above.) Richard Freadman’s book Shadow of Doubt: My Father and Myself was significantly affected by dialogue between us, much of which is incorporated into and informs a significant perspective in his book. After intensive discussions on the relationship of music and Judaism, Felix Werder brought me a musical rendition for voice and piano of Psalm 118, which strongly reflected those ideas. In other words, an alternative scenario for the restarting of high religious art is through a willing, sensitive collaborative engagement of the artist and the spiritual educator. Various methodologies of the latter are set out in the last chapter of Aesthetics and the Divine.

All the artists discussed in these two books were Jewish, but this does not take away from the relevance of models of the “instigation” of religious high art to a general readership—a non-Jewish readership. The methodologies of this kind of “collaborative” art are generally applicable, and the spiritual content of their work has a quality of generality. This is because Judaism has in it both a specific and a general or universal message. At Mount Sinai the Jews were given their specific commandments. But at Sinai there was also reiterated a Divine code which has bound humanity from its inception. This code is known as the Noahide laws, or the laws of Noah, the survivor of the biblical Flood and ancestor of all humanity. They follow from a monotheistic theology and stipulate laws relating to belief in and service of the Creator, sexual morality, justice, the prohibition of theft and killing, and the proper treatment of nature. They came down from Noah to Abraham into the Abrahamic religions Judaism, Christianity and Islam; and, which is less well known, there is also a transmission of this core theology from Abraham to Hinduism and the religions of the East.

Although the artists represented in these books are Jewish, the themes of their work pertain to this universal message which came from Abraham. The visual artwork of Victor Majzner discussed in Aesthetics and the Divine relates to a universal theme, the unity of the Creator as manifest in the creation. The discussed literary work of Richard Freadman relates to the precept of honouring parents, a spiritual value to which all religious cultures relate. The musical work of Felix Werder is about prayer and its entreaty of a transcendent Creator, a theme to which all great religious cultures can relate. And the theme of the artistic life of Chaim Bill Meyer is that of spiritual “return”, personal spiritual repair, a theme meaningful to all religious cultures.

It may be that as art opens again to spirituality out of the great cultural hiatus and deracination from faith traditions imposed by global secularism, it will open particularly to that universal, common denominator contained in the Noahide laws, with which all the great faiths resonate.

The restarting of great religious art, the project of a rapprochement of the spiritual and the artistic worlds, comes at the expense of neither. The artist’s personality and form-language are not to be lost in the encounter with religious belief. Rather, they are reworked and reoriented to express uniquely the artist’s spiritual understanding. Nor is the traditional knowledge of transmitted faith to be compromised to suit the whims of an artist’s subjectivity. We are talking here about the integrity of art and the integrity of faith, coming together in various possible ways, of which I have sought in these books to document some examples.

Rabbi Dr Shimon Cowen is the founding director the Institute for Judaism and Civilization, which is based in Melbourne

Prince Philip and the Art of Painting

The Impulse to Make Art