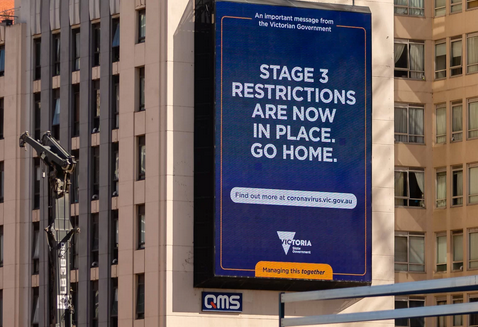 As we Victorians lamented and endured yet another state-wide lockdown caused by the incompetence of Premier Dan Andrews and his ALP government’s failed hotel quarantine regime, a few other equally depressing thoughts also came to mind. For as tiresome and unnecessary as this latest lockdown undoubtedly was, the sad fact remains that Andrews and the ALP continue to be broadly popular, and are on track to win yet another term of government come the next election, due in 2022.

What explains this paradox? Presumably, as the theory goes, in a democracy any governing party that exhibits enough bunglings and failures will be voted out at the next election, installing even the flimsiest opposition into power under the hope of even the merest improvements in delivery and competence: any evidence to the contrary is a scenario surely not worth contemplating.

The most recent failures that have occurred in the hotel quarantine program—coming on top of last year’s hotel quarantine catastrophe where the decision to place notions of diversity and “identity” over rigor and competence led to the deaths of hundreds of Victorians—are just the tip of the iceberg. A litany of other recent fiascos is also all too easily recalled: the branch-stacking scandal, the non-construction of the East-West Link, the blowouts on the Metro Tunnel, or the gang riots at Moomba. In fact, hardly a month has gone by without an ALP ineptitude of some kind or another.

Yet in spite of all of this, Andrews and the ALP remain, and the ALP has now held power in Victoria for seventeen of the last twenty-one years. Their tenure is predicted to increase, given the recent redrawing of state electoral boundaries in favour of the ALP. This development obviously spells further doom to the already dwindling Liberals—a point made by the Herald Sun’s James Campbell, among others.

And it is in the details of such restructures that the answer to the Andrews paradox is revealed. As has happened in a variety of locales across the Western world, large-scale demographic change has heavily favoured parties of the Left, rendering the Right impotent and largely useless. The situation is most obvious in places like California and Canada, and now, with the recent inauguration of Joe Biden and Kamala Harris, throughout the US.

And so too it is here in Victoria. The Liberals’ share of the overall vote declines as their dominance in Melbourne’s eastern suburbs is eclipsed by the growth in population (and the associated ALP vote) in other parts of town. The ALP is now comfortably ahead in the immigration-fuelled, high-growth regions of Melbourne’s north and west, holding all but three of the thirteen seats that have populations of 10 per cent more than the state average. The ALP also holds all of the fifteen fastest-growing suburban areas and almost forty of the forty-five electorates with the greatest number of (soon to be ALP-voting) children.

Thus, to answer our initial paradox: the incompetence of Andrews and his government—which is substantial, given not only these latest debacles, but the amount of high-ranking staff and party members that have left his team—is almost irrelevant, as “the people” are overwhelmingly on his and the ALP’s side. With the Liberals losing middle-income local “progressives” and lower-income migrants, they are pushing against demography.

Which is why Andrews can be as incompetent as he likes, as nothing the opposition says or does really matters much. A switch of leadership from Michael O’Brien—a man almost unknown to the broader Victorian public—to Tim Smith, or whomever, will do little to change the attitudes and voting habits of the bulk of the people in the increasingly important western half of the city: that is, a people which views the Liberal Party as an anachronism and votes accordingly.

This realisation must have dawned among the wiser heads of the Victorian Liberals. A brief glance overseas at the broader movements and correlations between immigration, demographic change and left-of-centre political dominance should have made this long evident.

This explicit connection between immigration and a leftward shift in politics was outlined by Helen Andrews last year in the article “How Early Immigration Shifted Our Politics Permanently to the Left” in the American Conservative, concerning the twentieth-century US experience. Ann Coulter was writing about the subject in 2015, and Michael Anton in his 2020 book The Stakes describes how his once Republican home state of California came to be coloured a deeply toned, and deeply dysfunctional, Democratic blue.

Thus the Victorian Liberals are yet another right-of-centre party that is finally having to confront the (largely predictable) consequences of the gaping contradictions inherent in their own policies and ideology. Their decades-long reliance on immigration to stoke economic growth (John Howard, for example, doubled the immigration intake) did achieve the narrow economic goal of a sufficiently buoyant economy (almost thirty years without a recession, before Covid). Yet their failure to contend with the deeper electoral changes that such a demographic shift has wrought has left them in a rather pathetic position, unable to exert influence on events.

The Right therefore finds itself at an impasse. Howard’s dream that the Liberals were a “broad church” that was able to unite “both economic liberalism and social conservatism” was always a fantasy. As Victoria has shown, social and economic liberalism—which emaciates social capital, erodes the birth-rate, and is reliant on immigration for economic growth—destroys the possibility of any type of healthy, socially-conservative society. This sad truth is occasionally acknowledged by the federal Liberal Party, as they make cosmetic changes to the social fabric (such as Morrison’s recent change to the National Anthem) whilst continuing full-steam-ahead with the demographic and economic changes that have made themselves and their party increasingly irrelevant.

The larger effects brought about by these demographic changes may now be so deeply baked into the electoral cake that right-of-centre parties—particularly socially conservative ones, rather than economically laissez-faire—are consigned to political oblivion. The recent US electoral result seems to confirm this trend.

Yet, given the Right’s role in bringing about their own demise by prioritising the short-term and short-sighted economic impetus of mass-immigration over any broader, longer-term notions of the national good, it’s hard to feel much sympathy. As the latest hotel quarantine disaster has shown*, the Right are now merely spectators, watching with bemusement and anger as the latest leftist leader struts and frets upon the stage, lurching from one crisis to another.

Online editor’s note:  when Ryan Anderson sat down to write this lament for a dying Victoria there had been three lockdowns. Since June’s Quadrant went to press the state has been subjected to a fourth, with all the customary irrational and inconsistent restrictions on normal life and commerce.

Ryan J. Anderson is a teacher and essayist based in Melbourne

The Royal Commission and the Church

Surrogacy and the Misbegotten Family