The Progressive Uglification of Everything 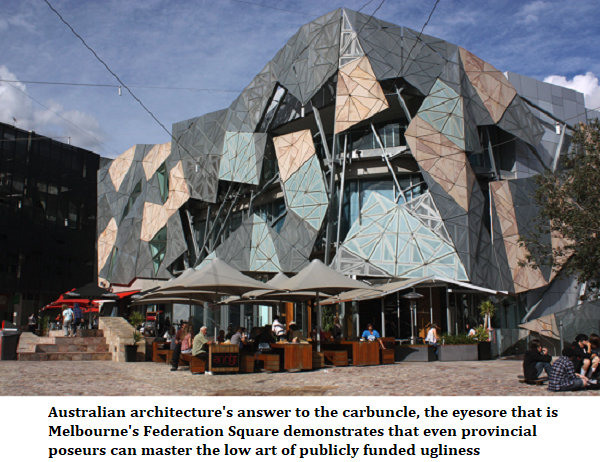 It is time again for the most important—which is to say the most publicised—prize in Britain for contemporary visual arts, the Turner Prize. It is as well-named as would be the Wolfgang Amadeus Mozart Prize for rap music or the Ceausescu Prize for the preservation of ancient churches.

Needless to say, those short-listed for the prize have done more than their little bit for the progressive uglification of the world—one would expect no less. In a world of injustice, after all, beauty as once understood is socially-regressive and unjust, the privilege of the few. To be concerned with aesthetics or to create anything in any way beautiful would thus be to be complicit with the status quo, the unbearable conditions in which 99 per cent of the world’s population are forced to live (especially in the West, and more especially artists in the West). To create beauty would be to reinforce the oppressive structures that brought about and maintain such conditions.

The director of Tate Britain (how I detest the “re-branding” of cultural institutions, perhaps the nadir of such condescension towards the general public by culture-apparatchiks being the Bozar of Brussels) delivered himself of the following judgment:

After a year of lockdowns when very few artists have been able to exhibit publicly, the jury has selected five outstanding collectives whose work has not only continued through the pandemic but become even more relevant as a result.

Incidentally, the director of Tate Britain is described by the BBC as “the prize chair”, though I should describe him as a prize something-else. I suppose, though, it is appropriate that those who have, or express, robotic thoughts should be described as pieces of furniture. The BBC reported:

The efforts—by Array Collective, Black Obsidian Ground System (B.O.S.S.), Cooking Sections, Gentle/Radical and Project Arts Work—have included artwork in support of law changes in Northern Ireland, a 24-hour fundraising rave for queer, trans and intersex black and people of colour, and the use of food to help understand the workings of the world, as well as a lockdown doorstep neighbourhood story-telling campaign and work by a group of neurodiverse artists.

The judges are reported to have said that all the above collectives had showed “solidarity” with various communities in the country during a difficult twelve months. The way in which the work of the groups is described would make a speech by the late Leonid Brezhnev seem like a Hamlet soliloquy:

Black Obsidian Sound System … work across art, sound and radical activism. Formed by and for QTIBPOC (queer, trans and intersex black and people of colour), the group aims to challenge the norms of sound-system culture across African communities in London—through club nights, art installations, technical workshops and a film documenting QTIBPOC nightlife.

Trying to write about what is wrong with all this is like trying to explain a joke or refute a madman’s delusions. Surely no one is going to exclaim, once informed that Black Obsidian Sound System (or any of the other contenders for the prize) is not exactly in apostolic succession to Piero della Francesca and Vermeer, or to Li Song or Payag, that he now realises that what B.O.S.S. do is so far removed from all previous art that it cannot be put in the same category of activity. (The question “But is it art?” should be avoided, however, not because the question is necessarily wrong in itself, pace the philosopher Arthur C. Danto, but because even asking it puts a person immediately into the category of those who would have approved of the exhibition of degenerate art in Berlin in 1937.)

As soon as one reads words such as deep commitment, hyper-local community, collaborative practice with, for and by neurominorities, or slogans such as “The marginal is our normal”, one smells a rat—or perhaps I should say bureaucracy and public funding. The fact is that, even by the very low standards of modern-day billionaire patrons, the work of these collectives is nil, trivial, and evanescent. The billionaires may grossly over-value the works of, say, Jean-Michel Basquiat, but at least, in buying one, they have something tangible in their possession whose value will never fall quite to zero. And so long as the gas of quantitative easing keeps flowing, the price-bubble of such artworks will keep inflating.

The various collectives that have been chosen for the prize are collective in more than one sense. I doubt that anyone will be much surprised to learn that they are funded, in what part I cannot say, by entities such as the government’s Arts Council and the National Lottery Fund. This last is particularly egregious. Doctor Johnson once said that lotteries were a tax on stupidity, but in this case a lottery acts as a subsidy of people play-acting at artistic activity by poor people who have little or no hope of making a fortune any other way.

I am not sure that Doctor Johnson was right, by the way: for once his human understanding seems to have deserted him. The hope of winning a lottery is real and exciting, but the failure to win is not really a disappointment because the hope was not allied to any expectation. Thus, for a small fee, the purchaser of a lottery ticket is provided with hope for a week, or a month, and not prey afterwards to any disagreeable or unpleasant emotion of equivalent strength. In other words, it is a pretty good bargain.

But it seems to me infinitely preferable that the profits of a lottery should go to a private entrepreneur, or alternatively to a genuinely good cause, than to alleged artists selected either by a hapless bureaucracy or by morally and intellectually corrupt arts apparatchiks, including those from the world of art commerce. Art needs patrons, of course, but discriminating ones: which no doubt helps to explain why practically all public art these days (almost everywhere in the world) manages to combine the qualities of mediocrity and monstrosity.

I do not say that the Turner Prize is of absolutely no utility: it permits a number of young people to play at their kindergarten activities while imagining that they are creating something of artistic value. To this extent the prize adds to the sum of human happiness, as also by fomenting the derision of many others, who are probably vastly more numerous. The kindergartners can believe that they are misunderstood, even persecuted (there is no surer guarantee these days of feeling in the right than to be misunderstood or persecuted, or to imagine that you are); the deriders can believe that they are defending civilised cultural standards by their derision. Like the lottery ticket, then, the Turner Prize is not bad value for money.

One of the collectives in line for a prize is neurodiverse, a term I had not previously come across, though it is not very new. But even the neurodiverse themselves cannot quite make up their minds whether they like the term or not: whether, for example, being autistic, or rather being on the spectrum as it is known these days, is an illness, a handicap or merely an alternative, but not inferior, way of being. Some include psychopaths among the neurodiverse, but psychopaths are probably not very good at forming a community of their own, at least not for long. And then there is the question of whether, when it comes to the award of prizes, having Asperger’s syndrome trumps being intersex, especially black intersex. The award of art and other prizes is coming to resemble golf tournaments or steeplechase races in which handicaps are given to the competitors.

I once had a patient with Asperger’s syndrome, a poor unfortunate young man of low intelligence, whose obsession was with light bulbs. He collected or accumulated so many that he could hardly move in his bedroom for them. If someone tried to interfere with them by rearranging them or by reducing their number he became aggressive and even violent. Economists may talk of market- or use-value, but for him light bulbs had neither market- nor use-value: they were the very meaning or essence of his existence.

When I read of the kindergartners who are engaged on pseudo- or para-artistic activity, such as that upon which the candidates for this (and every other) year’s Turner Prize are engaged upon, I confess that I think of my patient with Asperger’s syndrome. Social reform is for them what light bulbs were for my patient, the whole meaning of their existence. Do they never get bored with all their simulated grievance and outrage? No more than did my patient with his light bulbs.

How long before neurodiversity becomes neuro-uniformity?

The Unseemliness of Incontinent Emotional Expression