Black Lives Matter: The Myths and the Facts 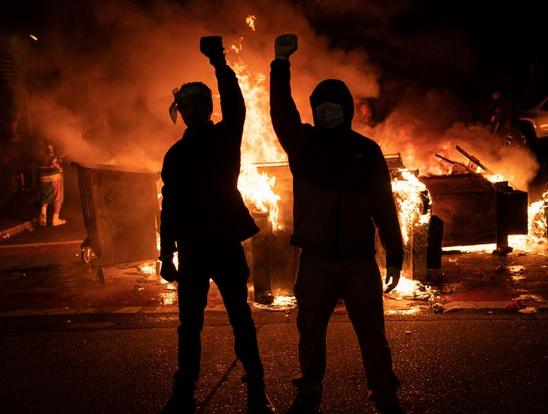 George Floyd was a forty-six-year-old truck driver and minor hip-hop rapper with the group “Screwed Up Click”. Between 1997 and 2013 he was also a career criminal, serving eight terms in prison for a range of offences including drug possession and delivery, theft and trespass. In 2009, he was sentenced to five years in prison for armed robbery during a home invasion. Paroled in January 2013, he determined to go straight, joined an evangelical church, and moved from his home in Texas to Minneapolis. There he became a truck driver and nightclub bouncer—he was six feet six inches tall—and security guard. As a result of the Covid-19 pandemic he lost his jobs when his employers closed down. On May 25, 2020, he was arrested for allegedly passing a counterfeit $20 bill at a Minneapolis grocery store. Floyd died after Derek Chauvin, a white police officer who came to arrest him, pressed his knee to Floyd’s neck for eight minutes and forty-six seconds, while Floyd was handcuffed and lying face down in the street, shouting, “I can’t breathe!” Floyd’s official autopsy termed his death a homicide attributed to cardiopulmonary arrest, but also added that fentanyl (a recreational drug) intoxication and methamphetamine use were “significant conditions” for his death. Chauvin (like three other police with him) was immediately dismissed from the police force and awaits trial on a second-degree murder charge.

Floyd’s death set off an storm of protests around the world, many of which were violent, and added greatly to the visibility and apparent necessity of the “Black Lives Matter” (BLM) movement. His death was the latest in a series of high-profile cases given international publicity by BLM, which include the acquittal of George Zimmerman for shooting black teenager Trayvon Martin in Sanford, Florida, in 2012, and the shooting of another black teenager, Michael Brown Jr, by a police officer in Ferguson, Missouri, in 2014. Millions of people around the world have accepted the veracity of their central message that vast numbers of innocent black people in the United States have been persecuted by the local police purely on racial grounds, and, expanding from that claim, that America is still pervasively racist. These messages have become gospel on the American Left, and have increased the influence of the radical wing of the Democratic Party.

In fact, the BLM movement is one of the greatest frauds ever perpetrated by the Left on the American public and, by extension, on public opinion throughout the Western world. Its raison d’être is that America’s police forces systematically engage in widespread racist attacks, especially unjustified shootings, against ordinary black people simply going about their business.

The facts are different. Below is a table of “Persons shot to death by the police” in the United States in 2018, 2019, and up to November 30, 2020. (George Floyd was allegedly choked to death by Chauvin, not shot; there is apparently no data on choking to death, as it is so rare.)

As will be seen, more whites than blacks have, consistently, been shot dead by the police, and only around one-fifth of such deaths were those of blacks. These figures have, of course, to be placed in a wider context. The total population of the US is about 330 million, of whom about 41 million are black and 56 million Hispanic (of any race). Heather Mac Donald, a highly perceptive Fellow of the Manhattan Institute, has commented incisively about these claims:

In 2019 police officers fatally shot 1004 people, most of whom were armed or otherwise dangerous. African-Americans were about a quarter of those killed by the cops last year (235), a ratio that has remained stable since 2015. That share of black victims is less than what the black crime rate would predict, since police shootings are a function of how often officers encounter armed and dangerous suspects. In 2018 African-Americans made up 53% of known homicide offenders in the US and committed about 60% of robberies, although they are just 13% of the population … The police fatally shot nine unarmed blacks and nineteen unarmed whites in 2019, according to a Washington Post data base … Those nine unarmed black victims of police shootings represented 0.1% of all African-Americans killed in 2019. By contrast, a police officer is eighteen and a half times more likely to be killed by a black male than an unarmed black male is to be killed by a police officer.

The more closely one looks at each purported case of an unjustified shooting of a black man by a policeman in America, the more dubious many of these claims seem. The journalist Matt Walsh looked up every case of an unarmed black man shot by the police in 2019 that was included in the Washington Post’s 2019 data base. According to Walsh, six of the fourteen killings included in the data base “ranged from outrageous to questionable”. But eight other “unarmed” shootings were in a different category:

Melvin Watkins was shot by a sheriff’s deputy after Watkins’s family called 911 [the emergency phone number] to report that he’d become violent and they feared for their safety. When officers arrived on the scene, Watkins allegedly tried to run them over with his car. Multiple witnesses support this version of events. Knoxville police officer Dylan Williams was cleared of any wrongdoing by the D.A. [District Attorney] after fatally shooting Channara Pheap last summer. Five eyewitnesses, plus video evidence and dash camera footage, confirmed that Pheap assaulted Williams, choked him, grabbed his taser, and used it on him. Ryan Twyman was shot by the police after attempting to arrest him for possession of illegal firearms in June 2019. Security camera footage shows Twyman driving away with an officer trapped by his car door. The other officer on the scene opened fire, fearing for his partner’s life. Kevin Pudlik was killed by police during a car chase. The driver of the car Pudlik was in, Christopher Lee Calvin, nearly pinned an officer between his car and a concrete wall. Cops on the scene finally opened fire when they believed Calvin was intentionally trying to ram into an officer … Isaiah Lewis, a black teenager, was shot by police after pouncing on an officer and kicking him unconscious … Kevin Mason of Baltimore was shot by police responding to a domestic violence call. Mason sent dogs after the officers. When that didn’t scare them off, he called 911 and threatened to “blast” them and “kill every last one of them”. Mason was ultimately shot when he emerged from his home after explicitly announcing his intention to murder the cops on the scene.

The widespread publicity given to the George Floyd case, the riots and violence which ensued as a result, and the calls by the extreme Left to “defund” the police, have led to many police officers quitting their forces rather than put up with the lies and violence of the extreme Left. In Minneapolis, where Floyd was killed, by August 19, 2020, the number of homicides had reached the total of the previous year in just eight months. According to reporter Holly Bailey:

Day and night the bullets rip through the predominantly Black neighborhood [of Minneapolis], hitting cars and homes and people. The scores of victims have included a 7-year-old boy, wounded in a drive-by shooting [and] a woman who took a bullet that came through her living room wall while she was watching television.

The Minneapolis City Council originally planned to defund their local police force, but settled for a major decrease in its budget, as an estimated sixty police officers quit the force in the wake of the Floyd killings and the ensuing riots.

Major increases in crime have also been reported in most large American cities. In some cases this was clearly a response to the unemployment and dislocation caused by the pandemic, but it has also been attributed to the riots and the undermining of confidence in the police caused by the BLM movement and the George Floyd killing. Overwhelmingly, in America’s big cities, violent crimes are caused by its black and (to a lesser extent) its Hispanic populations, while the role of the police in violence against blacks or anyone else is trivial or non-existent. In Chicago, whose population of 2.7 million is 30 per cent black, there were 792 homicides (91 per cent by gunshot) in 2020, compared with 512 in 2019 and 586 in 2018. (To put this in context, Victoria, with a population of 6.4 million, had 101 homicides in 2019.) Of these Chicago homicides, 627 (79 per cent) were of blacks, mainly young gang members and drug dealers killed by other blacks in inner-city ghetto areas, 131 were of Hispanics, and thirty-two were of whites. The Chicago police killed precisely seven persons (of any race) and wounded another thirteen. Much the same is likely to be true in every other big American city.

The BLM movement and its allies have perpetrated one of the greatest hoaxes on modern American public debate, unfortunately with literally deadly consequences in too many cases. But as always, the central aim of America’s radicals is the destruction of society.

William D. Rubinstein taught at Deakin University and the University of Wales, and is a frequent contributor to Quadrant

Naive Optimists and the Grim Reality