At School with James Joyce 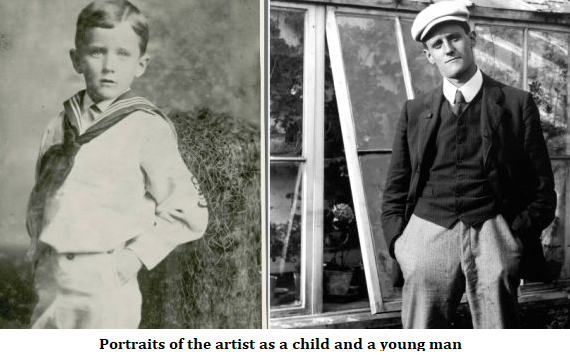 Frank Budgen’s insightful James Joyce and the Making of Ulysses (1934) tells of a parcel Budgen receives after making his first call on the Joyce family in Zurich in 1918. It contains a copy of Joyce’s first novel, A Portrait of the Artist as a Young Man, as well as an accompanying letter which includes parts of a review of the book by H.G. Wells. The work has been received favourably; Wells makes comparisons with Jonathan Swift and Gulliver’s Travels in particular. In short, Wells has decided that Joyce’s work is “like some of the best novels in the world … the story of an education”.

Swift himself famously claimed to have had the “education of a dog”. Sent at the age of six to a small but reputable school noted for its rigour, he was an average student at best and afterwards, having advanced to Dublin’s Trinity College, was remembered by his contemporaries chiefly for an ability to set a good hearth fire on a chilly night. Here he received a bene (good) for Latin and Greek, a male (bad) for Philosophy and a negligenter (careless) for Theology. This was one rung up from a pessime (worst). Let it be said however, that nearly half of Swift’s cohort received mediocriter in omnibus (unremarkable in everything). What does this tell us? John Forster, one of Swift’s earliest biographers (1875), studied the college records extensively and found only one student to have achieved a bene in omnibus—a boy by the name of Thewles—and as Forster astutely points out, “he had not been heard of since”.

Be that as it may, the formal education of James Joyce—or “Sunny Jim”, as he was happily known at home—began with the Jesuits at Father Conmee’s Clongowes Wood College in Kildare in 1888; the “brand” ably supported by a Mrs Conway who lived with the Joyce family for a time and who would convince the boy that thunder was the sound of God’s wrath. She also nurtured visions of an Apocalypse and encouraged viewings at Dublin’s National Gallery of Francis Danby’s large painting of the Earth’s destruction, where a dramatic flash of lightning heralded the moment, according to Saint John, when:

the sun became black as sackcloth of hair; and the whole moon became as blood; and the stars from heaven fell upon the earth … every mountain, and the islands were moved out of their places …

Should lightning interfere with a normal day, Mrs Conway would have “Sunny Jim” recite: “Jesus of Nazareth, King of the Jews, from a sudden and unprovided death deliver us, O Lord.”

The boy’s father, John Joyce, had believed a Jesuit education best suited James in terms of the provision of both kudos and opportunity. As Simon, the patriarch in A Portrait of the Artist as a Young Man, pragmatically puts it: “Christian Brothers be damned! … Is it with Paddy Stink and Mickey Mud? No, let him stick to the Jesuits … Those are the fellows that can get you a position.”

At the school, James is known for a time as “Half Past Six”, since this had been his answer upon being asked his present age. He found his initial schooling both rewarding and pleasant. He enjoyed playing the role of an imp in a production of Aladdin and on summer afternoons the peace of the schoolground is only broken by—as described in A Portrait of the Artist as a Young Man—“the sound of the cricket bats; pick, pack, pock, puck: like drops of water falling softly in the brimming bowl”.

The Official Plan for Jesuit Education—or the Ratio Studiorum, as it was first known when issued in 1599—included the teaching of Rhetoric, Arithmetic, Euclid and Algebra as well as the works of the ancient poets such as Virgil and Horace, the speeches of Caesar, Livy and Sallust and the philosophical writings of Cicero. Essay topics were based on maxims such as “Zeal Without Prudence Is Like A Ship Adrift”.

Circumstances, financial and otherwise, see James and his younger brother by two years, Stanislaus, follow Father Conmee to the Dublin day school, Belvedere College, in 1893. It is here that James, already considered an excellent student and admirably devout to boot, establishes a reputation for erudition. In response to the essay topic “Trust Not Appearances”, the eleven-year-old mentions “the cringing servile look” and “the high and haughty mien” and discusses how both can “conceal the worthlessness of character”. It is also here that he begins studies for the Preparatory, the first level of the Intermediate Exam, which he will take in 1894. The English course contains works by Byron and Wordsworth and also provides an introduction to Charles Lamb’s Adventures of Ulysses. A year later, it acquaints him with Robinson Crusoe; Daniel Defoe is a writer for whom he maintains a lifelong admiration, one of only four for whom, as he tells Budgen, he can claim to have read every line of their complete works—the other three being Ben Jonson, Gustave Flaubert and Henrik Ibsen.

A day school provides the advantage of allowing Dublin itself to be explored. The Dublin Public Library, built in 1884 and proudly the twenty-fourth of its type in the British Isles, is well stocked with Conan Doyle’s immensely popular Sherlock Holmes, but it also provides a copy of Gargantua and Pantagruel by François Rabelais, Honoré de Balzac’s Old Goriot and Émile Zola’s The Downfall and The Dream. The keeper of the books is an earnest type and, concerned that young James borrows books such as Thomas Hardy’s Tess of the D’Urbervilles, feels compelled to inform the boy’s father. John Joyce explains that he feels his son is capable of choosing his own reading, yet the attempt at censorship must have had some effect since James begins to cajole his brother to borrow books on his behalf. Something of a stir occurs when Stanislaus inquires after “Jude the Obscene” rather than Hardy’s Jude the Obscure, but the keeper of the books tells him that he has neither of those titles on his shelves.

By the final Intermediate year (1897-98), Joyce is beginning to think of himself as a writer. He has written stories which he refers to as Silhouettes and poems he titles Moods. Machiavelli’s History of Florence, in the original Italian, has introduced Dante and Savonarola. He is also developing what might be termed a precocious contrariness; so that when the class is expected to respond to Charles and Mary Lamb’s Tales from Shakespeare for instance, he prepares a piece on Lamb’s Essays of Elia; or if Alexander Pope’s Essay on Man is the set text, Joyce responds to Pope’s translation of The Odyssey. This contrariness begins to find expression in a profound distaste for physical activity as well. Belvedere has a new gymnasium overseen by a Sergeant-Major Wright and the venue becomes the stage for some of Joyce’s best work as a comic, using Indian clubs and dumbbells as props. For an encore he ties his thin body into improbable knots on the horizontal bars and feigns agony, much to the pleasure of his fellow students. On one swimming outing he climbs onto rocks, shivers in an exaggerated manner to the delight of his classmates and then takes up the pose of “Poverty”. This harmless rebellious streak might strike us as nothing out of the ordinary; yet for Joyce, whose reputation up until this juncture is one of compliance and devotion, it marks the beginning of the end of what Stephen in the posthumously published Stephen Hero—the precursor to A Portrait of the Artist as a Young Man—describes as “that fever fit of holiness”.

Joyce takes the Belvedere final-year English course in his increasingly confident stride. It had begun with Geoffrey Chaucer and finished with Oliver Goldsmith: however, his own reading is more in tune with George Bernard Shaw’s essay The Quintessence of Ibsenism (1891). Though less fastidiously studious, he still wins a first prize for Composition and with a portion of the £4 received for this, he purchases a fourth-edition copy of John Ruskin’s Mornings in Florence. His choice of a guide book on Christian art, and indeed one written by a paragon of the Victorian era—and what is more, one who felt their faith had been recovered through that art—says something of the conundrum in the mind of the sixteen-year-old for whom university awaits. In the book, Ruskin writes of education beginning with the resolve to know what is true. He continues:

choice is offered to every youth and maid at some moment of their life; choice between the easy downward road, so broad that we can dance down it in companies, and the steep narrow way, which we must enter alone.

He warns of the difficulty such choice pronounces and predicts the questioning of one’s will, yet affirms that:

day by day, the “sense” of rightness of what they have deepens in them, not in consequence of that effort, but by the gift granted in reward of it. And the sense of difference between right and wrong, and between beautiful and unbeautiful things, is confirmed in the heroic, and fulfilled in the industrious soul.

Barry Gillard, who lives in Geelong, is a frequent literary contributor

One thought on “At School with James Joyce”